The American Cannabis Operator Index extended its post-March weakness again in August, declining 16.4% to 61.62 in action that mimicked the decline in July: 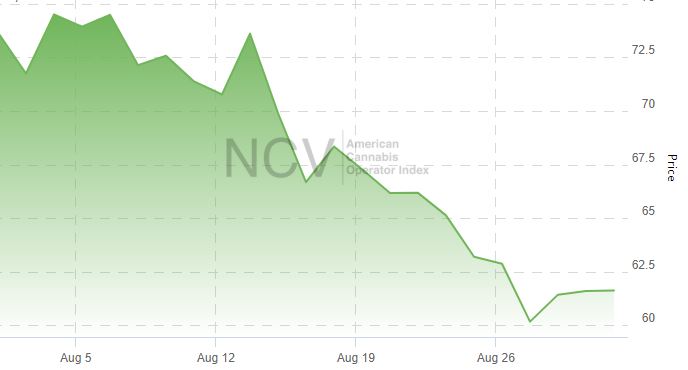 The index, which launched at the end of October with a value of 100, traded as low as 70.64 in late December after having reached a closing high of 124.16 in early November. This past month, it eclipsed the prior December low and is now down 20.3% in 2019:

During August, the index included 25 companies, including 20 multi-state operators (MSOs) and 5 focused solely on CBD extracted from industrial hemp. Several MSOs are pursuing CBD strategies apart from their state-licensed cannabis businesses. 4 companies managed gains, while 16 posted double-digit losses, including 7 that lost more than 25% of their value: 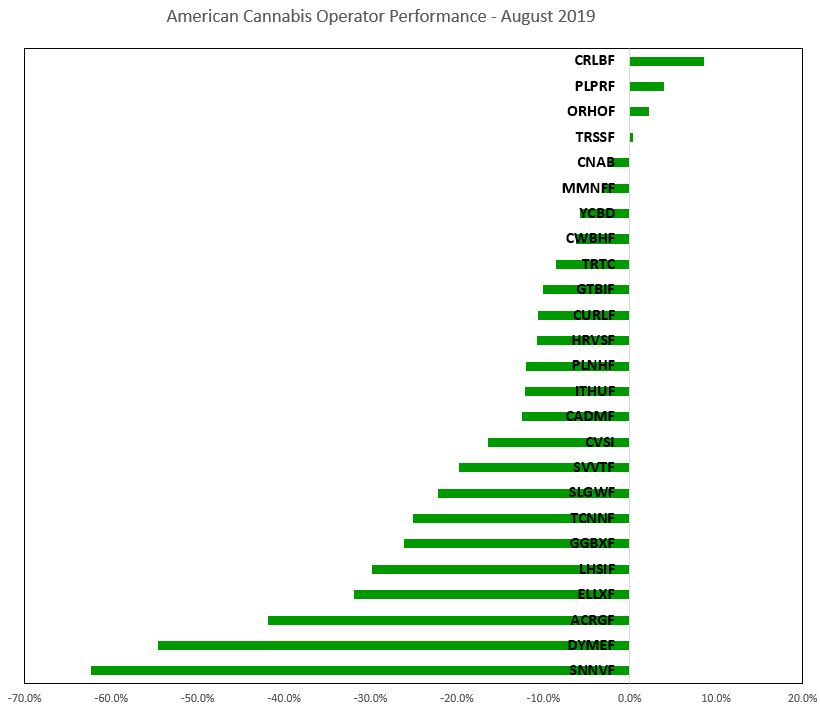 Cresco Labs (CSE: CL) (OTC: CRLBF), which lost almost half of its value from late April to early August, led the way with a gain of only 8.5%. The stock is now up 22.4% in 2019. Sunniva (CSE: SNN) (OTC: SNNVF) led the stocks that declined, losing over half its value after it announced further construction delays in California and retracted its revenue guidance. Last month’s winner, DionyMed Brands (CSE: DYME) (OTC: DYMEF), also lost more than half its value. Acreage Holdings (CSE: ACRG) (OTC: ACRGF) posted new all-time lows during August and is down substantially in 2019, even after adding back the $2.63 dividend shareholders received from Canopy Growth, which would give it a total return of -47.8%.

For September, the number of names in the index will increase by 1 to 26. Joining the index are MSO AYR Strategies (CSE: AYR) (OTC: AYRSF), Marimed (OTC: MRMD) and Veritas Farms (OTC: VFRM), the latter two of which are hemp-focused. The stocks being removed include  Chemesis International (CSE: CSI) (OTC: CADMF) and Dionymed Brands, both of which failed to maintain the minimum daily volume requirement.