The American Cannabis Operator Index extended its post-March weakness again, declining over 8% to 87.35:

The good news is that the stocks managed to recover somewhat from the mid-June lows, ending the month 5% higher than where it closed on June 14th. Still, Q2 was quite challenging, as the index lost 23.8% of its value.  The index, which launched at the end of October with a value of 100, traded as low as 70.64 in late December after having reached a closing high of 124.16 in early November. It has now rebounded 23.7% from the December 24th low and is up 13.0% in 2019:

During June, the index included 30 companies, including 25 multi-state operators (MSOs) and 5 focused solely on CBD extracted from industrial hemp. Several MSOs are pursuing CBD strategies apart from their state-licensed cannabis businesses. 4 companies managed double-digit gains, while 14 posted double-digit losses, including 3 that lost more than 25% of their value: 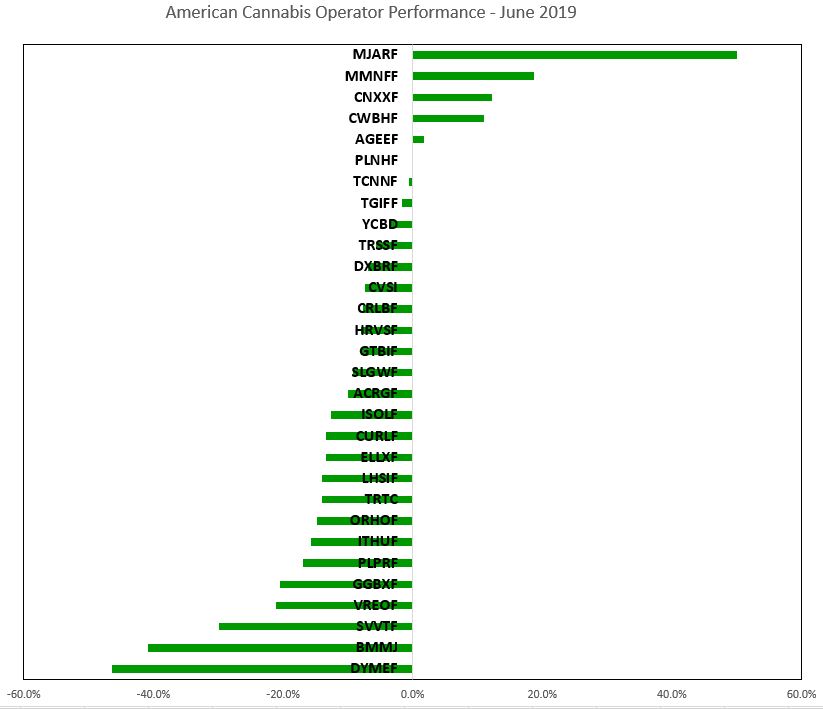 Note that the decline in Acreage Holdings (CSE: ACRG) (OTC: ACRGF) doesn’t include the pending receipt of $2.63 per share from Canopy Growth. Otherwise, it would have increased in price by 4% rather than its 10% decline. This reduced the overall index by 0.5%.

The four best performers  were among the worst performers in May, with each having declined in excess of 20% that month. At the same time, Body and Mind (CSE: BAMM) (OTC: BMMJ), one of this month’s worst performers, was by far the best performer in May, rising 24%. DionyMed Brands (CSE: DYME) (OTC: DYMEF) and TILT Holdings (CSE: TILT) (OTC: SVVTF) are both relatively new to the public markets, debuting in late 2018, and posted new all-time lows during the month.

In the next monthly review, we will summarize the performance for July and discuss any additions or deletions. Be sure to bookmark the page to stay current on American cannabis operators stock price movements within the day or from day-to-day.