Fourth Quarter 2019 Financial Highlights
(Unless otherwise stated, comparisons are made between Fiscal Q4 2019 and Q4 2018 results and are in Canadian dollars)

We set out to be a leader in the legal U.S. medicinal and adult-use markets, and our solid top line performance speaks to the significant strides we have made in attaining this goal.

“We made substantial progress in 2019 developing our U.S. infrastructure and building our production capacity with a focus on profitable revenue opportunities, all the while continuing to streamline our Canadian operations. As we look ahead, TerrAscend’s experienced leadership team has never been better positioned to accelerate our momentum, deliver long-term value for our shareholders, and provide exceptional experiences to our patients and customers.”

Despite the short-term challenges facing the global economy, we remain on track, both operationally and financially, to continue to execute on our goals of driving strong revenue growth in 2020 and achieving adjusted EBITDA positive results. We are committed to driving shareholder value and will continue to pursue accretive and strategic opportunities. 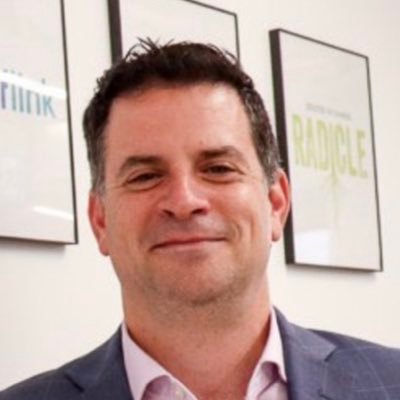 Entering fiscal 2020, the Company remains focused on the execution of its U.S. strategy. Through strategic acquisitions and the growth and expansion of its current asset base, the Company is committed to achieving scale and profitability in each market it operates. In January, the Company completed the first earnout payment to the former owners of Ilera Healthcare, a vertically-integrated cannabis cultivator, processor and dispensary operator in Pennsylvania. Additionally, TerrAscend NJ, LLC received a permit to cultivate medical marijuana by the New Jersey Department of Health. These achievements, in conjunction with the rightsizing of the Canadian operations, position TerrAscend well to become a dominant U.S. operator.

Based on a preliminary (unaudited) review, the Company anticipates Q1 2020 net sales to be approximately $35 million, compared to $25.9 million in Q4 2019 representing approximately 35% sequential growth. The Company continues to make progress in improving its margins and has completed construction of its Pennsylvania production facility, tripling its cultivation capacity. Production output from the expansion was realized towards the end of Q1 2020 and will be fully realized in Q2 2020. The preliminary estimated Q1 2020 financial results set forth above are subject to the completion of the Company’s financial closing procedures. Please refer to the section regarding forward-looking information which forms an integral part of this release. 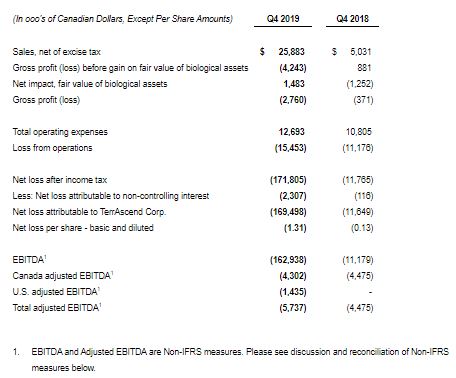 Gross margin, before gain on fair value of biological assets was (16)% in Q4 2019, compared to 18% in Q4 2018. The change in gross margin compared to the prior quarter was driven by a material impairment charge related to the Company’s Canadian cannabis inventory which occurred in Q4 2019, as well as a short term increase in cost of goods sold as the Company scaled up its U.S. operations. Excluding the impact of the non-cash Canadian inventory charges incurred in Q4 2019, gross margin would otherwise have been 39%.

Q4 2019 G&A was $12.3 million, an increase of 52% compared to Q4 2018. The change was primarily driven by the Company’s focus and investment in establishing its U.S. operations. TerrAscend expects to continue to strategically invest in acquiring the talent and developing the appropriate infrastructure to ensure continued market share improvement in the high-growth U.S market.

In Q4 2019, adjusted EBITDA loss was $5.7 million compared to $4.5 million in Q4 2018. On a geographic basis, adjusted EBITDA loss from the Company’s Canadian and U.S. operations in Q4 2019 was $4.3 million and $1.4 million, respectively. The change in adjusted EBITDA compared to the prior year period was primarily driven by a decline in Canadian cannabis revenues as a result of ongoing demand issues which persisted through December 2019, as well as an increase in G&A expenses and an increase in cost of goods sold as the Company scaled up the organization through investments in additional headcount as it continues its U.S. expansion.

During Q4 2019, the Company recorded the following asset impairment, goodwill and write off charges:

In addition, during Q4 2019 the Company reported a $61.9 million revaluation of contingent consideration liability related to the acquisition of Ilera, driven by the outperformance of the business versus the Company’s initial expectations. As a result, the Company now expects to pay the full final payout based on its success to date.

Cash and cash equivalents were $11.9 million as of December 31, 2019 compared to $21.8 million as of December 31, 2018. Subsequent to the quarter end, the Company raised gross proceeds in excess of $120 million, including the previously announced loan financing agreement with Canopy Growth in the amount of $80.5 million. A portion of the proceeds received from Canopy Growth were used to fully pay off the outstanding principal and interest amounts under the Credit Facility with JW Asset Management.

About TerrAscend
TerrAscend provides quality products, brands, and services to the global cannabinoid market. As the first North American Operator (NAO), with scale operations in both Canada and the US, TerrAscend participates in the medical and legal adult use market across Canada and in several US states where cannabis has been legalized for therapeutic or adult use. TerrAscend was the first cannabis company with sales in the US, Canada, and Europe. TerrAscend operates a number of synergistic businesses, including The Apothecarium, an award-winning cannabis dispensary with several retail locations in California; Arise Bioscience Inc., a manufacturer and distributor of hemp-derived products; Ilera Healthcare, Pennsylvania’s premier medical marijuana cultivator, processor and dispenser; and Valhalla Confections, a manufacturer of premium cannabis-infused edibles. TerrAscend holds a cultivation permit in the State of New Jersey and is pending approval for a vertically integrated medical cannabis operation with the ability to operate up to 3 Alternative Treatment Centers. Additionally, TerrAscend holds a Medical Cannabis Processor License in the State of Utah. For more information, visit www.terrascend.com. 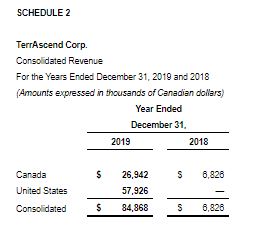 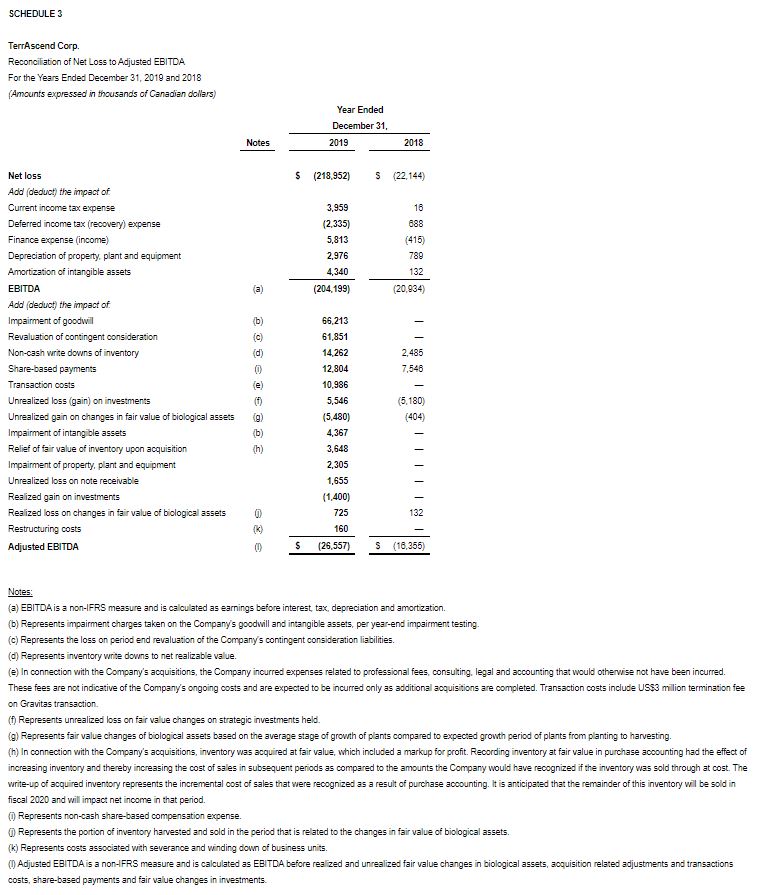