Aphria (TSX: APH) (OTC: APHQF) has filed a Form 40-F that reveals it is intending to list on the New York Stock Exchange: 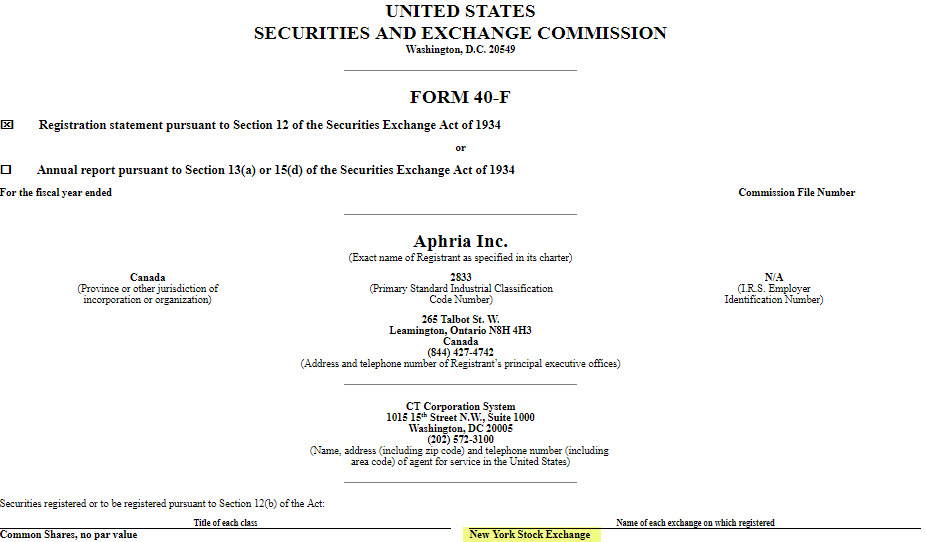 The company will join an exclusive group of Canadian cannabis producers that currently trades on a major U.S. exchange, including  Canopy Growth (TSX: WEED) (NYSE: CGC), and Cronos Group (TSX: CRON) (NASDAQ: CRON) and Tilray (NASDAQ: TLRY), which trade on the NASDAQ. Recently Aurora Cannabis (TSX: ACB) (OTC: ACBFF) disclosed that it will begin trading on the NYSE with the symbol “ACB” later this month.   Aleafia (TSXV: ALEF) (OTC: ALEAF) has filed its Form 40-F and intends to trade on the NASDAQ, while it is likely that CannTrust (TSX: TRST) (OTC: CNTTF) and HEXO Corp (TSX: HEXO) (OTC: HYYDF) will list on a major U.S. exchange as well.

Until Cronos Group listed on the NASDAQ earlier this year, no companies growing, processing or selling cannabis had done so with the exception of GW Pharma (NASDAQ: GWPH).

It’s not clear what trading symbol Aphria will use on the NYSE, but it won’t be “APH”, as Amphenol already uses that symbol.