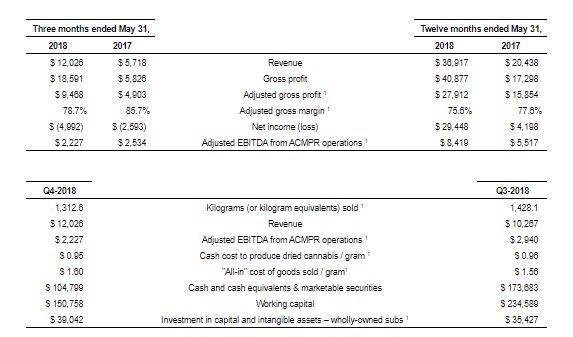 We had a healthy fourth quarter and a solid year with many achievements we are proud of. We are excited and ready to hit the ground running on the first day of legal adult-use. It won’t be without its challenges but we have a plan and the team in place to get it done. We continue to sign supply agreements with provinces and territories, and our Southern Glazer’s sales network partnership is unmatched, ensuring our brands and products are available and represented by retailers across the country.

Beyond that, we will continue to extend our industry-leading expertise and experience into global markets. We’ve had an exciting year adding more depth and experience to our senior leadership team that has helped expand our international operations and presence outside of Canada, US and Australia to an additional eight countries, and look forward to continued expansion within LATAM.

“Our continued growth and success is a direct result of the hard work and dedication of our employees and partners in delivering quality product and value to our patients, and establishing Aphria as the premier cannabis company in Canada and around the world,” concluded Neufeld.

The Company remains committed to the responsible use of our shareholders’ investment in Aphria, with a focus on profitable execution of our activities. The Company has consistently demonstrated the proven ability to generate positive EBITDA from its operating facilities. As the cannabis industry and the Company transitions from medical use to adult-use in Canada and to significant international exposure, the Company will continue to make targeted, measured and ROI proven investments in its growing portfolio of recreational brands, alternate uses of cannabis, including the transition of cannabis from a product to an ingredient, and international opportunities. However, in the short-term, investments could result in lower corporate adjusted EBITDA.

During the quarter, the Company bolstered its position as one of the industry’s lowest cost producers. For the second consecutive quarter, the Company reported Cash costs of $0.95, remaining below $1.00. As previously disclosed, the Company’s “All-in” costs of dried cannabis per gram1 (“All-in costs”) increased minorly from $1.56 to $1.60, costs consistent with the additional staff levels added in advance of production capacity increases in the quarter.

The Company believes in full financial reporting transparency to shareholders and will continue to report financial metrics with an appropriate base of grams, or kilograms where relevant, to ensure shareholders are capable of properly comparing metrics amongst industry participants. Further, when reporting non-IFRS measures, the Company will continue to provide detailed disclosure, and transparency tied to its released financial statements.

Revenue for the three months ended May 31, 2018 was $12,026, representing a 17% increase over the prior quarter’s revenue of $10,267. The increase in the quarter was driven primarily by reporting Broken Coast results for a full quarter, compared to one month in the prior quarter, increased sales to medical patients at Aphria, all offset by the Company’s previously announced decision to discontinue wholesales sales to other licensed producers, to provide increased inventory for the eventual pipeline fill for adult-use and international market opportunities over the next six to nine months. Cannabis oil sales, as a percentage of volume, decreased from 33.1% to 29.2% in the quarter, largely driven by the significantly lower percentage of volume sales of oil purchased by Broken Coast medical patients.

Net loss for the three months ended May 31, 2018 was $4,992 or $0.06 per share, as opposed to a net loss of $2,593 or $0.02 per share in the prior year. The decrease in net income for the quarter relates to $6.5 million in incremental share based compensation, $3.3 million of costs associated with Aphria International, $8.6 million in net losses on the Company’s investment portfolio, all offset by almost $13.0 million in incremental gross profit.

Net income for the year ended May 31, 2018 was $29,448 or $0.18 per share, as opposed to $4,198 or $0.04 in the prior year. The increase in net income for the year relates to fair value adjustments associated with biological assets and unrealized gains on the Company’s investment portfolio.

The Company invites you to join its analyst conference call on Wednesday, August 1, 2018 at 9:00 am EST to discuss its financial results for the quarter-ended and year ended May 31, 2018. An audio replay of this call will be available until September 1, 2018.

We Have A Good Thing Growing.

1 – In this press release, reference is made to adjusted gross profit, adjusted gross margin, adjusted EBITDA from ACMPR operations, kilogram
(or kilogram equivalents) sold, cash costs to produce dried cannabis per gram, “all-in” costs to produce dried cannabis per gram and investments
in capital and intangible assets – wholly-owned subs, which are not measures of financial performance under International Financial Reporting
Standards. Definitions for all terms above can be found in the Company’s May 31, 2018 Management’s Discussion and Analysis, filed on SEDAR.