41 companies currently qualify for inclusion, with 29 filing in U.S. dollars and 12 in the Canadian currency, which is the same as when we provided an update earlier this month. Auxly (TSX: XLY) (OTC: CBWTF) was added, while Organigram (TSX: OGI) (NASDAQ: OGI) was removed due to its revenue slipping below the minimum. 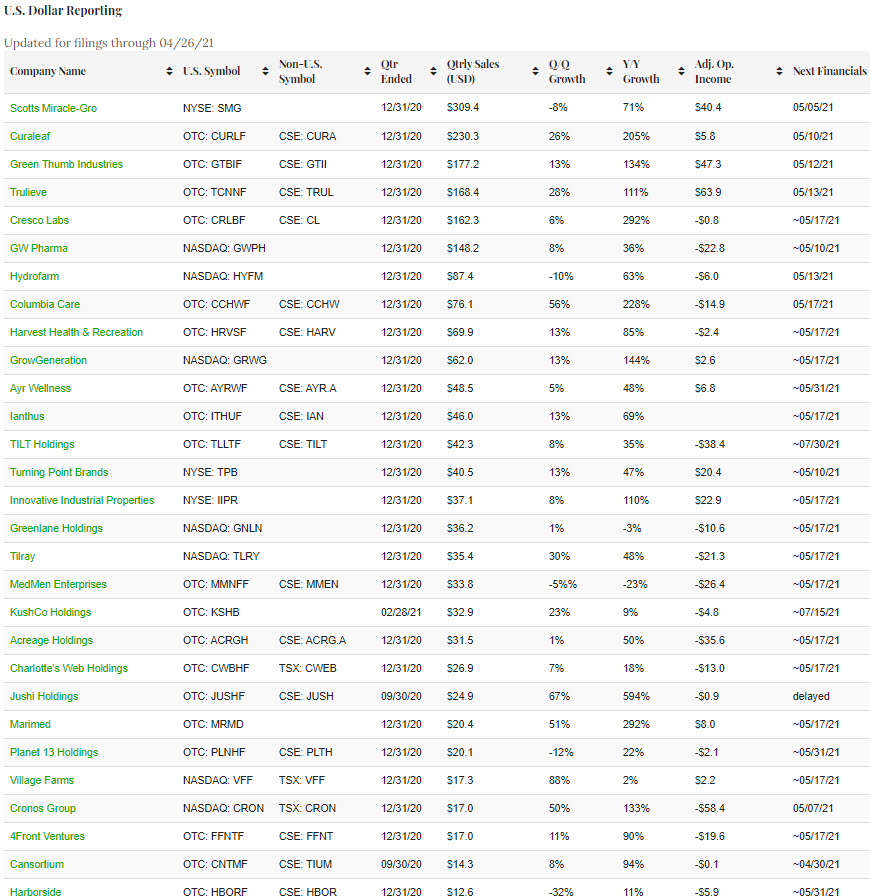 Get ready for a deluge of reports from some of the largest companies in the first part of May. With a larger universe of companies and with most of them now conforming to the SEC filing deadline, which is shorter than in Canada, it’s going to be quite busy the second week of May. Among the companies generating the highest levels of revenue that are expected to report in the first half of May are Scotts Miracle-Gro (NYSE: SMG), Curaleaf Holdings (CSE: CURA) (OTC: CURLF), Green Thumb Industries (CSE: GTII) (OTC: GTBIF), Trulieve (CSE: TRUL) (OTC: TCNNF), Cresco Labs (CSE: CL) (OTC: CRLBF), Hydrofarm (NASDAQ: HYFM) and Columbia Care (CSE: CCHW) (NEO: CCHW) (OTC: CCHWF).

According to Sentieo, Scotts’s Miracle-Gro overall Q2 revenue, the majority of which is its lawn and garden business, is expected to grow 25% to $1.7 billion, with EPS of $5.42 in the company’s peak quarter of the year seasonally. In its recent analyst day, the company suggested that its Hawthorne business would grow near the high-end of its previously suggested 20-30% growth rate for its fiscal year ending in September.

In April, three leading Canadian LPs, including Aphria (TSX: APHA) (NASDAQ: APHA), Auxly and Valens Company (TSX: VLNS) (OTC: VLNCF) reported as well as retailer Fire & Flower (TSX: FAF) (OTC: FFLWF). Aphria’s decline in its Q3 revenue was a surprise and due to weakness in its adult-use sales. Valens began its fiscal year with a big increase off of its Q4 results. Auxly attributed its strong Q4 growth to its success in its non-flower products, which represented 80% of revenue. Fire & Flower exceeded analyst expectations for both revenue, at C$43.2 million, as well as adjusted EBITDA, which was C$1.5 million as it ended its fiscal year. 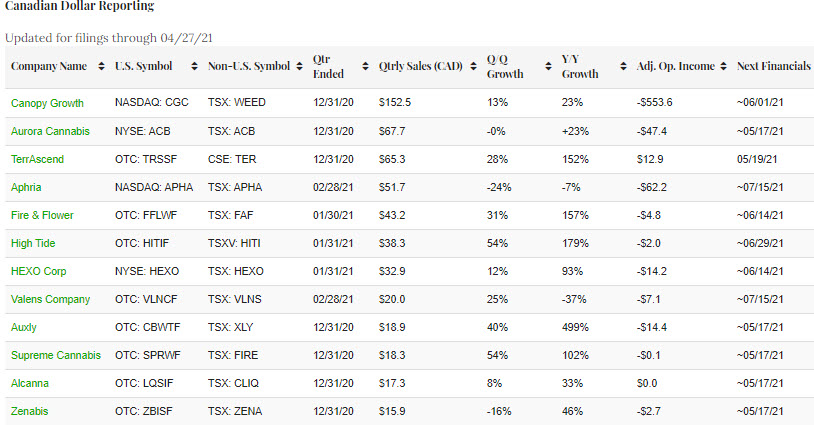 During May, Aurora Cannabis (TSX: ACB) (NYSE: ACB) and TerrAscend (CSE: TER) (OTC: TRSSF) are among the larger companies that will be reporting financials. According to Sentieo, Aurora Cannabis revenue in its fiscal Q3 is expected to increase 5% sequentially to C$71.3 million, which would represent a decline of about 5% from a year ago. TerrAscend, which will be changing its reporting from Canadian to American dollars in its Q1 report to reflect that the vast majority of its revenue is derived from its MSO operations, is expected to report revenue of US$65.3 million with an adjusted EBITDA of US$25.6 million.

For those interested in more information about companies reporting in May, we publish comprehensive earnings previews for subscribers at 420 Investor, including for Focus List members Aurora Cannabis, Columbia Care, Cresco Labs, Curaleaf, Green Thumb Industries, Scotts Miracle-Gro, TerrAscend and Trulieve.