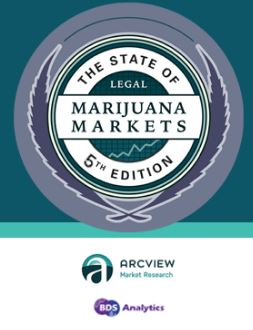 Just one year after announcing an alliance with New Frontier, Arcview Market Research revealed that it will now be working with BDS Analytics to create its 5th Edition of The State of Legal Marijuana Markets. Arcview issued a press release detailing its market forecast for 2021 for North American cannabis sales in excess of $20 billion, acknowledging the new partnership.

The new and revised market projections rely on a new proprietary bottom-up point of sale foundation with millions of individual consumer transactions from dispensary partners in the largest legal cannabis markets across the country created by BDS Analytics.

Tom Adams, who served as the Managing Director and Principal Analyst at BDS Analytics after joining the firm in June and now holds the title of Managing Director – Investment Research Division, will be the new Editor-in-Chief of Arcview Market Research.

Troy Dayton, Arcview’s CEO, had praised New Frontier’s “team of experienced researchers from other industries, its rigorous analytics and vetted data” when the partnership was announced a year ago. BDS Analytics, based in Boulder, partnered with the National Cannabis Industry Association last year, offering portions of its GreenEdge™ platform to its members free of charge.