Last Friday after the close, The Green Organic Dutchman  (TSX: TGOD) (OTC: TGODF) reported that strategic partner and investor Aurora Cannabis (TSX: ACB) (OTC: ACBFF) had opted to not exercise warrants that would have allowed it to boost its stake by 8% at a 10% discount to the stock price. The warrants were originally set to expire on September 2nd, but the two parties agreed to extend the expiration to October 12th.

Aurora and TGOD had struck a deal in early January, with Aurora agreeing to buy 33.33 million units at C$1.65, picking up common shares along with 16.67 warrants at C$3.00. Aurora also gained the right to purchase up to 20% of the company’s production from its two pending facilities in Ontario and Quebec. Beyond the 8% option that Aurora declined to exercise, the company could have bought additional shares that would have given it control of the company upon TGOD attaining certain milestones. After the purchase in January, Aurora invested in the TGOD IPO, picking up an additional 6.34 million shares at C$3.65 along with 3.17 million warrants at C$7.00.

Not only did Aurora choose not to invest further in TGOD, but it also moved to reduce its holdings. According to filings at www.sedi.ca, Aurora disposed of over 5 million shares last Wednesday and Thursday that were disclosed after the news that the company had let the option expire unexercised:

TGOD’s stock has been under pressure lately but still trades at a premium to the May IPO price of C$3.65: 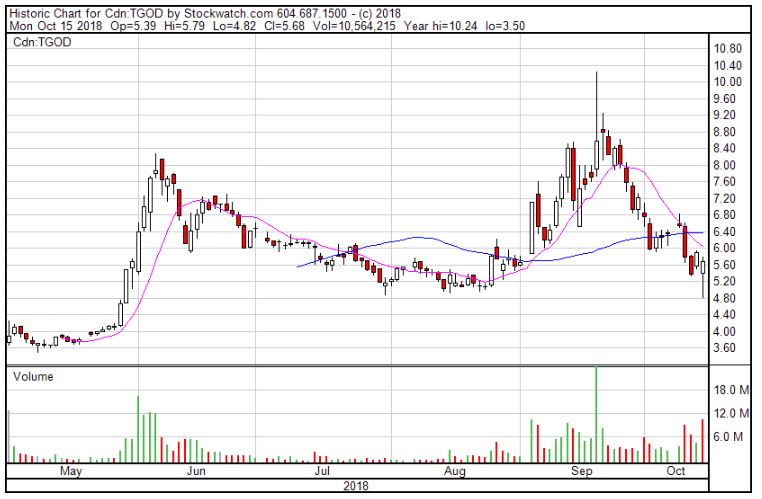