Over the past several years, Aurora has earned its place as a global leader in the cannabis industry. Despite short term distribution and regulatory headwinds in Canada that have temporarily impacted the industry, the long-term opportunity for Aurora in the global cannabis and cannabinoids market is immense. Aurora has, and will continue to focus on everything in our control. 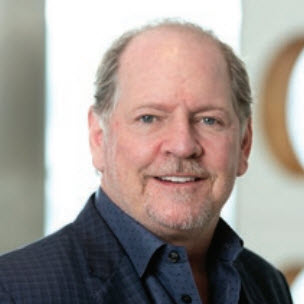 Mr. Booth added, “In order to capitalize on this global market, we recognize the need to be nimble and proactive. To enhance our financial flexibility and position us to take maximum advantage of future growth opportunities, we have also taken decisive steps to immediately strengthen our balance sheet. Specifically, these steps include: (1) the announcement of a formal plan to settle our 5.0% convertible debentures due March 2020, (2) a reduction in our capital investments over the next several quarters by over $190 million to better match near-term capacity expansion with anticipated demand, while maintaining our long-term demand outlook, and (3) raising over US$124 million in gross equity proceeds since the start of fiscal 2020 through our at-the-market (“ATM”) financing program.”

(Unless otherwise stated, comparisons are made between Fiscal Q1 2020 and Q4 2019 results and are in Canadian dollars)

Subsequent to the quarter end, the Company made several decisions designed to streamline its operations, provide financial flexibility and reduce financial leverage in response to a changing market and regulatory environment, while supporting our long-term growth: 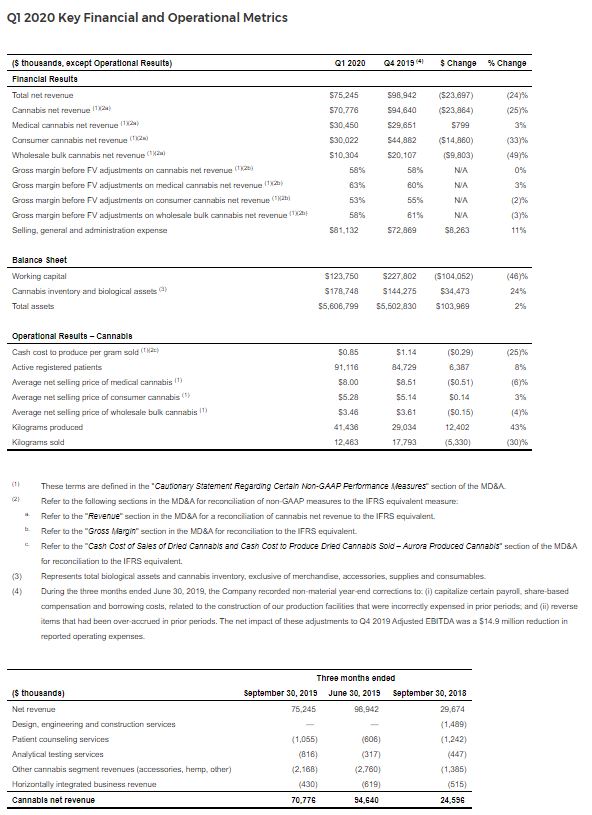 The table below outlines the breakdown of cannabis net revenue between our medical, consumer and wholesale bulk markets, as well as our dried cannabis and cannabis extracts for the three months ended September 30, 2019 and the comparative periods. 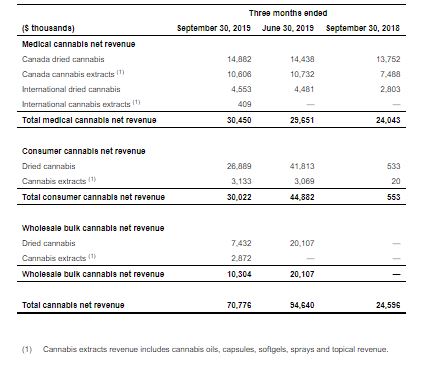 As a leader in highly automated, low cost production, Aurora is well positioned to align its operating assets to rapidly respond to evolving consumer preferences while pursuing potential white label wholesale opportunities and building a strong inventory of high-quality derivative products for launch later this year.

Gross margin on cannabis net revenue remained stable at 58% in Q1 2020, compared to 58% in the prior quarter.

During Q1 2020, Aurora produced 41,436 kilograms of cannabis as compared to 29,034 kilograms in the prior quarter. The 42.7% increase in production output was primarily due to continuing production scale up at the Company’s Aurora Sky facility. While Aurora Sky has delivered well above expectations from a capacity perspective, in responding to shifting consumer preferences the Company is likely to plant higher potency, lower yielding strains which are in higher demand in the recreational market. As such we do not expect near term production to reach levels achieved in Q1 2020, and the Company continues to operate at a 150,000 kg annual production capacity.

Excluding the impact of $10.6 million in out-of-period adjustments that were recognized in Q4 2019, Q1 2020 SG&A decreased by 3% to $81.1 million. The decline was driven by a decrease in fulfilment and shipping costs, and a decline in one-time expenses related to derivative product launches and regulatory fees during Q1 2020.

Adjusted EBITDA loss was $39.7 million in Q1 2020 compared to $26.6 million in Q4 2019, excluding the impact of the $14.9 million out-of-period adjustments recognized in the prior quarter. Developing a profitable and robust global cannabis company is extremely important to Aurora. While the Company strongly believes the global market opportunity for cannabis is robust, there is uncertainty in the timing of revenue ramp-up in our core markets, and we continue to invest in our global operations which may result in near term challenges to achieving positive adjusted EBITDA. However, the Company expects adjusted EBITDA to continue to improve in the future as we increase revenue through the sale of higher-margin extract products and increase gross margins through economies of scale, while investing in corporate capabilities with controlled SG&A growth.

The global medical cannabis and hemp derived cannabinoids markets represent a significant opportunity for Aurora. To support the Company’s prospects in these markets, Aurora continues to make necessary investments that will build long-term value for its shareholders while balancing growth with prudent financial management and capital allocation. This focus includes aligning Aurora’s planned cultivation assets and capital expenditures with global cannabis demand. With the Company’s operating cultivation assets outperforming nameplate capacity, Aurora is positioned to the meet near term global market demand and to pursue long term white label and contract manufacturing agreements with distribution partners in the Canadian and international markets.

Effective October 17, 2019, new regulations under the Cannabis Act came into effect which will allow for the sale of higher value, in-demand products such as vape pens, edibles, and other derivatives in the consumer market (“Cannabis 2.0”). The implementation of Cannabis 2.0 remains the most important market opportunity for the Company in Canada. Aurora is extremely well positioned and has prioritized its resources to prepare for a successful initial launch and supported an ongoing replenishment strategy to ensure consumers across Canada will have access to a diverse portfolio of high-quality derivative products they want to buy. Aurora expects to begin shipping these new product formats to provincial regulators starting late December 2019.

The other near-term focus and market opportunity for the Company is expanding its operating footprint in the United States. To ensure a successful entry, Aurora is evaluating a number of potential accretive alternatives with a focus on adding operating cash flows. The Company is committed to engage only in activities which are permissible under both state and federal laws.

Headquartered in Edmonton, Alberta, Canada with funded capacity in excess of 625,000 kg per annum and sales and operations in 25 countries across five continents, Aurora is one of the world’s largest and leading cannabis companies. Aurora is vertically integrated and horizontally diversified across every key segment of the value chain, from facility engineering and design to cannabis breeding and genetics research, cannabis and hemp production, derivatives, high value-add product development, home cultivation, wholesale and retail distribution.

Highly differentiated from its peers, Aurora has established a uniquely advanced, consistent and efficient production strategy, based on purpose-built facilities that integrate leading-edge technologies across all processes, defined by extensive automation and customization, resulting in the massive scale production of high-quality consistent product. Designed to be replicable and scalable globally, our production facilities are designed to produce cannabis at significant scale, with high quality, industry-leading yields, and low-per gram production costs. Each of Aurora’s facilities is built to meet European Union Good Manufacturing Practices (“EU GMP”) standards. Certification has been granted to Aurora’s first production facility in Mountain View County, the MedReleaf Markham facility, and its wholly owned European medical cannabis distributor Aurora Deutschland. All Aurora facilities are designed and built to the EU GMP standard.

Aurora’s Common Shares trade on the TSX and NYSE under the symbol “ACB” and is a constituent of the S&P/TSX Composite Index.