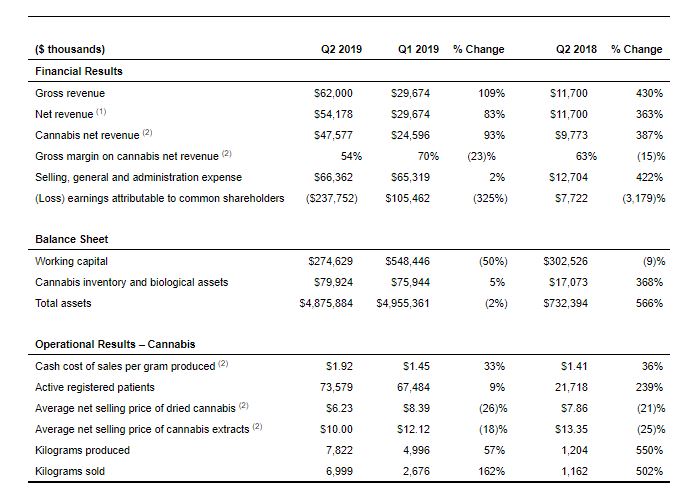 ¹Net revenue represents our total gross revenue exclusive of excise taxes levied by the Canada Revenue Agency (“CRA”) on the sale of medical and recreational cannabis products effective October 17, 2018.
²These terms and non-GAAP measures are defined or reconciled in Aurora’s Q2 2019 MD&A.

The most significant driver of Aurora’s revenue growth over the next twelve to eighteen months is the Company’s scale-up of high-quality production available for sale to the Canadian consumer market and the Canadian and international medical markets. Aurora is now operating at an annualized production rate of approximately 120,000 kgs, based on Health Canada approved planted rooms, and expects to reach in excess of 150,000 kgs by March 31, 2019. Management reiterates previous guidance that based on the Company’s current confirmed production results, Aurora will have approximately 25,000 kgs available for sale in Q4 (April to June 2019).

The Company anticipates that with Aurora Sky operating at full capacity, as well as continued reduction in operating costs, the cash cost to produce per gram will trend significantly lower. Management reiterates its expectation that the sustainable long-term operating cost at its Sky Class facilities will be well below $1 per gram.

Ongoing disciplined cost management is expected to result in SG&A costs growing modestly as compared to revenue growth over the remainder of the fiscal year.

Longer term, the Company expects that the launch of new higher value-added derivative product lines in relation to anticipated changes in Health Canada regulations, as well as the introduction of derivative products to international markets, will contribute to further revenue growth and margin expansion.

Aurora continues to execute strongly across all of its market segments, as demonstrated by the 83% revenue growth over last quarter and the significant increase in confirmed production results. Our brands continue to resonate extremely well in the consumer market, our patient numbers continue to increase steadily, and we have maintained our market leadership in Germany and other key international markets. We are experiencing exceptional demand for our Canadian medical and consumer products, as well as sustained strong demand internationally. 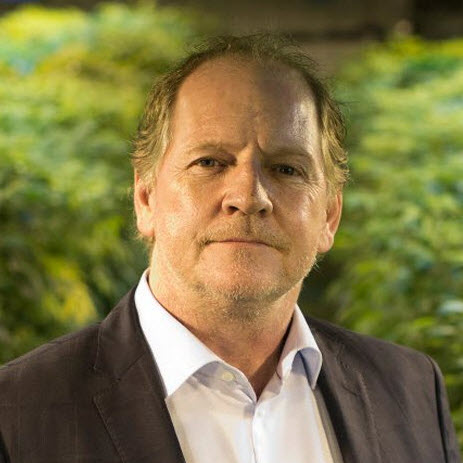 With our Aurora Sky and MedReleaf Bradford facilities ramping up production as anticipated and our other licensed facilities operating at full capacity, we are reiterating our earlier guidance of achieving sustained EBITDA positive results from the second calendar quarter of this year (our fiscal Q4).

Glen Ibbott, CFO of Aurora added, “We are also very pleased with our recent placement of US$345 million in convertible notes. These convertible notes were subscribed by high-quality US, Canadian, and international institutions and offer Aurora the flexibility and optionality to settle the entire principal amount of the notes in the future for cash, shares, or any combination thereof. This funding sufficiently supports the global opportunity for us to continue our commitment to growth in the legal, regulated medical and consumer cannabis systems across the globe. This is a unique time and position as we maintain a high cadence of increasing product supply and international market expansion.”

Mr. Booth concluded, “With our strong performance in the Canadian medical and consumer markets, our early mover advantage in a growing list of important international markets, together with our leadership in high-quality, CBD-rich hemp production, Aurora is strategically positioned across the entire cannabis industry value chain to further extend our rapid growth.”

As the global cannabis market continues to mature, Aurora has secured a distinct first-mover advantage by attaining valuable import and export agreements with markets that have a high barrier to entry, reinforcing the Company’s commitment to serving the global cannabis industry. New supply agreements this quarter have expanded the Company’s sales and operations to 23 countries.

During the quarter, the Company maintained its focus on product development and continued to execute on its strategy to generate a broad portfolio of high-margin, targeted medical and consumer products.

The Company has continued to execute on its aggressive growth strategy to build a strong business that incorporates all aspects of the cannabis value chain from greenhouse construction and cultivation to plant science research and consumer branding. During Q2 2019, Aurora has strengthened the scale of its operations, expanded its market reach, and diversified its expertise across the value chain through a number of highly strategic acquisitions and investments. 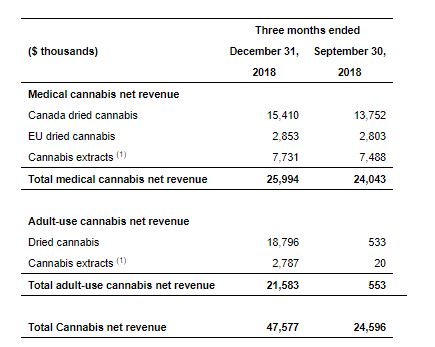 Headquartered in Edmonton, Alberta, Canada with funded capacity in excess of 500,000 kg per annum and sales and operations in 23 countries across five continents, Aurora is one of the world’s largest and leading cannabis companies. Aurora is vertically integrated and horizontally diversified across every key segment of the value chain, from facility engineering and design to cannabis breeding and genetics research, cannabis and hemp production, derivatives, high value-add product development, home cultivation, wholesale and retail distribution.

Highly differentiated from its peers, Aurora has established a uniquely advanced, consistent and efficient production strategy, based on purpose-built facilities that integrate leading-edge technologies across all processes, defined by extensive automation and customization, resulting in the massive scale production of high quality product at low cost. Intended to be replicable and scalable globally, our production facilities are designed to produce cannabis of significant scale, with high quality, industry-leading yields, and low per gram production costs. Each of Aurora’s facilities is built to meet EU GMP standards, and its first production facility, the recently acquired MedReleaf Markham facility, and its wholly owned European medical cannabis distributor Aurora Deutschland, have achieved this level of certification.