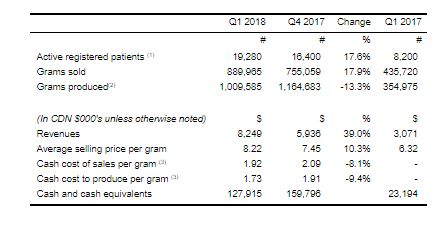 (1) As of the date hereof, the Company has over 20,000 active registered patients.
(2) Grams produced in the first quarter 2018 decreased due lower yielding strains being harvested in the period compared to higher-yielding strains in prior periods. Additionally, the Mountain View facility has reached optimal production capacity in the quarter.
(3) Cash cost of sales per gram and cash cost to produce per gram are non-IFRS financial measures that do not have a standardized meaning under IFRS and may not be comparable to other companies. See definitions at the end of this document.

Developments subsequent to the quarter

At Aurora Sky, we’re building what by mid-2018 will be the world’s largest capacity production facility, and we’re doing it at an amazing pace. We’ve made smart acquisitions, established ourselves as a partner of choice for strategic alliances, and expanded our product offering to customers. I’m absolutely delighted with the A-Team’s performance.

Being exceptionally well capitalized, our balance sheet provides the fuel needed to maintain a very high pace for footprint and product offering expansion. The agility and execution track record of our team translate into strong confidence in our ability to create significant further shareholder value going forward as we aggressively pursue domestic, international and product line growth.

A comprehensive discussion of Aurora’s financials and operations are provided in the Company’s Management Discussion & Analysis and Financial Statements to be filed with SEDAR today and will be published on www.sedar.com. 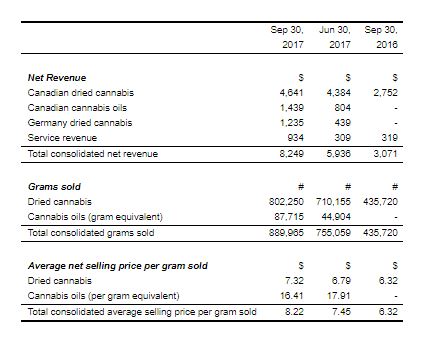 Revenues for the first quarter of fiscal 2018 were $8.2 million, up 168.6% from the same quarter in the prior year and up 39.0% from the previous quarter (Q4 2017). Revenue growth was achieved across all of the Company’s product lines and territories, driven predominantly by strong growth in Canadian cannabis oil sales, sales in Germany, and an increase in the average price per gram of product sold. The average price of product sold increased by 10.3% from $7.45 to $8.22 per gram, attributable mainly to strong increases in cannabis oils sold and sales through Pedanios in Germany.

Included in cost of sales for the three months ended September 30, 2017 were the unrealized gains on changes in fair value of biological assets of $4.6 million, inventory expensed of $2.0 million, and production costs of $2.1 million.

The increase in production costs and inventory expensed to cost of sales during the three months ended September 30, 2017 was largely attributable to increases in production and production yields during the period. The Company produced 1,009,585 grams of cannabis in the first quarter 2017 compared to 354,975 grams produced in the same period 2016, an increase of 184% or 654,610 grams. The cultivation of lower yielding but high demand strains during the quarter resulted in a slightly lower grams of product harvested as compared to Q4 2017 (1,164,683 grams).

Gross profit for the period under review increased to $8.8 million, as compared to $0.1 million for the three months ended September 30, 2016, attributable to the gain on the effect of changes in fair value of biological assets in addition to an increase of $5.2 million in revenues, as the number of active registered patients increased from 8,200 at September 30, 2016 to 19,280 at September 30, 2017. In addition, the Company generated $1.2 million in revenues through the sale of medical Cannabis by Pedanios in Germany.

Gross profit increased by 51% as compared to the previous quarter, attributable to a 43% increase in the gain on the effect of changes in fair value of biological assets and a 39% increase in revenues, offset partially by a 22% increase in production costs and inventory expensed to cost of sales as a result of scaling up of production.

General and administration costs increased by $1.9 million to $3.0 million for the quarter as compared to Q1 2017, attributable primarily to increases in corporate and general administrative activities as the Company scaled up its business operations in Canada and Germany, as well as other costs incurred related to ongoing negotiations for additional financings and investment opportunities. In the prior period, the Company began to expand operations with the acquisition of CanvasRx and closed equity and debt financings.

Sales and marketing costs were $3.7 million in Q1 2018, relatively stable compared to Q4 2017, and up $2.1 million as compared to Q1 2017, attributable mainly to increased service fees paid in relation to CanvasRx, and higher selling and client care expenses related to a substantial increase in registered patients and resulting business volume.

Net income before taxes of $4.7 million was recorded, as compared to a net loss before taxes of $6.3 million for the same quarter in the prior year. The increase was due predominantly due to higher revenues, an unrealized gain on the change in fair value of biological assets, as well as an unrealized gain on the $2.0 million Radient Technologies debenture Aurora invested in as part of its strategic collaboration.

Unrealized gains on marketable securities primarily resulted in in the Company recording a comprehensive net income of $14.5 million.

Aurora strengthened its balance sheet and liquidity position during the first quarter of 2018 with $1.5 million in new financings as follows:

Net cash and cash equivalents on hand decreased from $159.8 million as at June 30, 2017, to $127.9 million as at September 30, 2017, due mainly by net cash used for operations of $5.0 million, investments and capital expenditures of $28.4 million, and adjusted by $0.2 million from the effect of foreign exchange on cash flows, offset partially by cash flows of $1.3 million from financing activities.

The Company anticipates that it has sufficient funds to cover future operating cash flows, to complete the construction of its Aurora Sky facility and to execute its growth strategy for domestic and international expansion based on the current capital resources available. 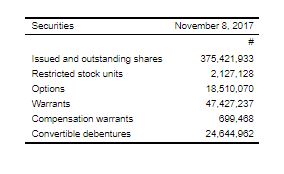 While production capacity at our Mountain View facility in Cremona is nearly fully optimized, we anticipate further expansion from the first calendar quarter of 2018 onwards with first harvest at Aurora Vie, followed in subsequent quarters by harvest from the first completed bays at Aurora Sky. Until such time, revenue growth will largely be a function of increased shipments to our European subsidiary, Pedanios, which will start contributing from Q2 onwards, growth of cannabis oil production and sales, increased product availability through strategic wholesale supply relationships, and consolidation of our recent acquisitions BC Northern Lights and Urban Cultivator.

Aurora’s business strategy is to continue accelerating its penetration of the Canadian medical cannabis market, leverage its Health Canada sales license for derivative products (cannabis oils), commence cultivation at its Aurora Vie facility in Quebec, and complete the Aurora Sky facility in Alberta for additional production capacity. Upgrades are also being undertaken to the Company’s first facility in Cremona, Alberta, to further enhance production.

In preparation for the anticipated mid-2018 Canadian federal legalization of adult consumer use of cannabis, the Company is building organizational and production capacity to capture a share of the adult use market.

Innovation and integration of technology are key components in Aurora’s growth strategy. Going forward, Aurora will continue to leverage new technologies, aimed at:

The Company is also focusing on delivering further product differentiation, through Aurora’s intended strategic investment in Hempco, its partnership with Namaste Technologies, and the acquisition of homegrow and urban garden companies BC Northern Lights and Urban Cultivator.

The Company has included the following non-IFRS performance measures in this press release:

In addition, the Company holds approximately 9.6% of the issued shares (12.9% on a fully-diluted basis) in leading extraction technology company Radient Technologies Inc., based in Edmonton, and is in the process of completing an investment in Edmonton-based Hempco Food and Fiber for an ownership stake of up to 50.1%. Furthermore, Aurora is the cornerstone investor with a 19.9% stake in Cann Group Limited, the first Australian company licensed to conduct research on and cultivate medical cannabis. Aurora also owns Pedanios, a leading wholesale importer, exporter, and distributor of medical cannabis in the European Union, based in Germany. The Company offers further differentiation through its acquisition of BC Northern Lights Ltd. and Urban Cultivator Inc., industry leaders, respectively, in the production and sale of proprietary systems for the safe, efficient and high-yield indoor cultivation of cannabis, and in state-of-the-art indoor gardening appliances for the cultivation of organic microgreens, vegetables and herbs in home and professional kitchens. Aurora’s common shares trade on the TSX under the symbol “ACB”. 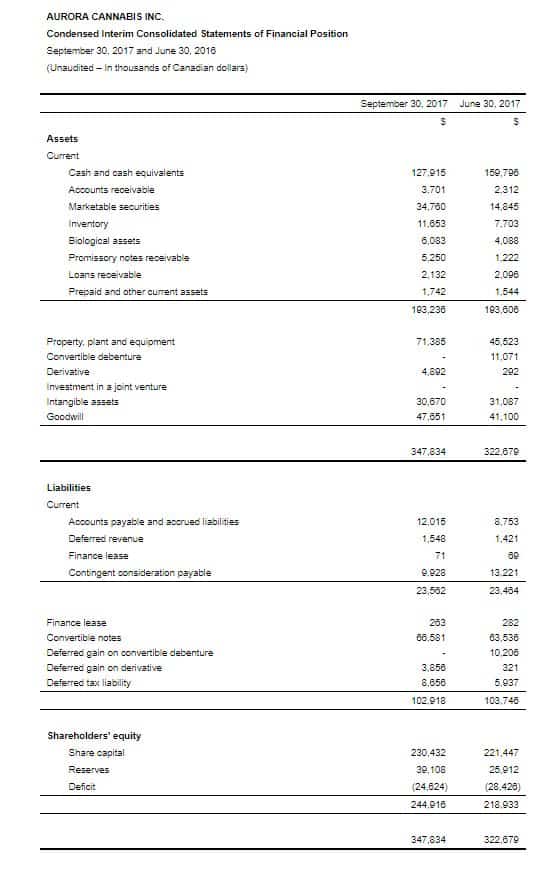 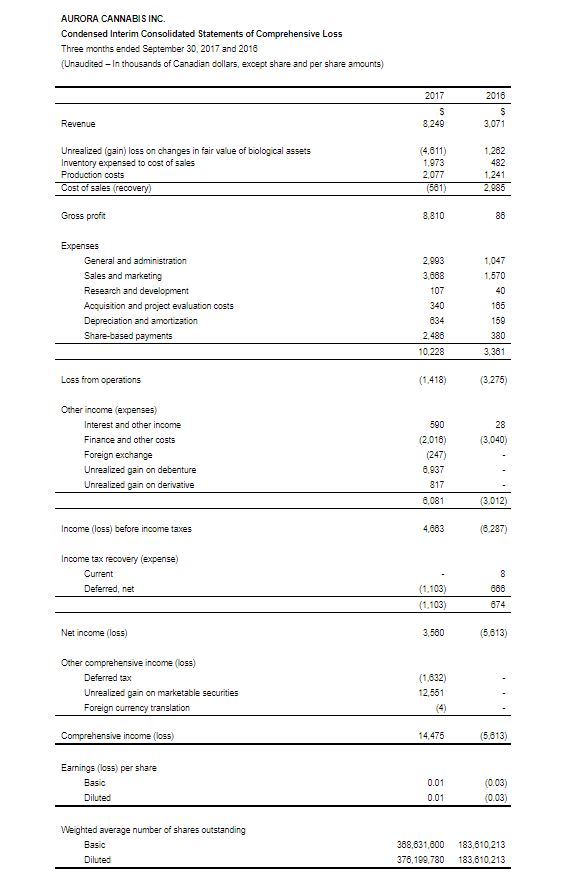 Diving Deep Into the Third Wave of Cannabis Investing