Revenues of $3.9 million, as compared to $0 (nil) for Q2 2016. Q2 2017 revenues reflect 26.5% sequential growth over Q1 2017. Current sales pace exceeds $1.5 million per month. The Company continues to execute well on all aspects of its growth strategy through the construction of a state-of-the-art 800,000 square foot production facility, as well as continued investments in technology, innovation, partnerships, customer service, and sales and marketing.

¹As of the date hereof, the Company has approximately 12,800 active registered patients

Developments subsequent to the quarter

The Aurora team continues to exceed its very aggressive strategic goals set out and approved by its board of directors.

“We are serving our rapidly growing base of active registered patients with some of the best cannabis on the market, and we continue to enrich the customer experience with innovations such as our hugely popular mobile app. We are also building a truly exceptional new 800,000 square foot state-of-the-art production facility, which we believe differentiates us and positions us exceptionally well to capitalize on the numerous opportunities created both by the rapidly growing medical cannabis market and the adult consumer market, once legalization is implemented. Additionally, initiatives such as our collaboration with Radient Technologies Inc. to research and implement superior extraction techniques, are indicative of how Aurora continues to be at the forefront of development in the sector. With one of the strongest cash positions in the industry, we are extremely well capitalized to execute on all our strategic growth plans, including the construction of our new Aurora Sky facility.”

Aurora commenced selling medical cannabis products on January 5, 2016. Revenues generated to date reflect what management believes is the fastest growth rate of active registered patients in the industry as the Company scales up to full production capacity at its existing facility in Mountain View County, Alberta.

Gross margin was $4.4 million for the three months ended December 31, 2016. During the prior period, the Company did not generate any revenue from operations as the Company had not commenced sales of medical cannabis. However, the Company had been building up its inventory and recorded a gain on the changes in fair value of its biological assets of $2.2 million.

General and administration costs increased by $0.8 million for the three months ended December 31, 2016. The overall increase was largely attributable to legal fees in relation to financing activities and due diligence conducted during the quarter, as well as the completion of the acquisition of CanvasRx.

Sales and marketing expenses for Q2 2017 increased by $2.1 million compared to the same period in the prior year, due primarily to the Company commencing its commercial operations and sales of medical cannabis January 2016 and generated expense related to the roll-out of its commercial initiatives.

The Company recorded a net loss of $2.7 million for the quarter, as compared to a $0.6 million net profit for the same period in the prior year and a $2.9 million improvement from a $5.6 million loss for Q1 2017. The net loss includes non-cash share based payments totaling $2.5 million. The net profit for the prior year’s second quarter was attributable mainly to a $2.2 million unrealized gain on changes in fair value of biological assets. As compared to the prior year, the net loss recorded for the period under review was due predominantly to a $5.2 million (including share-based payments) increase in operational expenses, including aforementioned share-based payments.

Working capital as of December 31, 2016 was $60.1 million, as compared to a deficiency of $2.7 million as at June 30, 2016. The $62.8 million increase in working capital was attributable primarily to an increase in cash and cash equivalents of $55.6 million, offset partially by a decrease in short term loans of $4.4 million.

The increase in cash and cash equivalents resulted mainly from net cash generated from financings of $69.9 million, offset partially by net cash used for operations of $6.0 million, as well as cash used for investments of $8.3 million.

Subsequent to December 31, 2016, the Company announced a brokered private placement for up to $75 million, as well as raised $5.5 million from the exercise of warrants, stock options and compensation options/warrants.

Details of the capital initiatives described above can be found in the Company’s filings on www.sedar.com 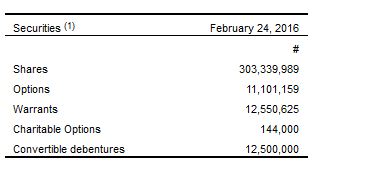 Aurora’s business strategy is to continue accelerating its penetration of the Canadian cannabis market, leverage its Health Canada sales license for derivative products (cannabis oils) and launch cannabis oils sales, transition to profitability in the short-term, and complete a major facility expansion for additional production capacity. When the federal government passes legislation legalizing the consumer use of cannabis, the Company anticipates participating in the non-medical consumer market, and will envision further production capacity expansion to meet future market demand for cannabis products.