TORONTO, May 16, 2022 /PRNewswire/ – Auxly Cannabis Group Inc. (TSX: XLY) (OTCQX: CBWTF) (“Auxly” or the “Company”) today released its financial results for the three months ended March 31, 2022. These filings and additional information regarding Auxly are available for review on SEDAR at www.sedar.com. 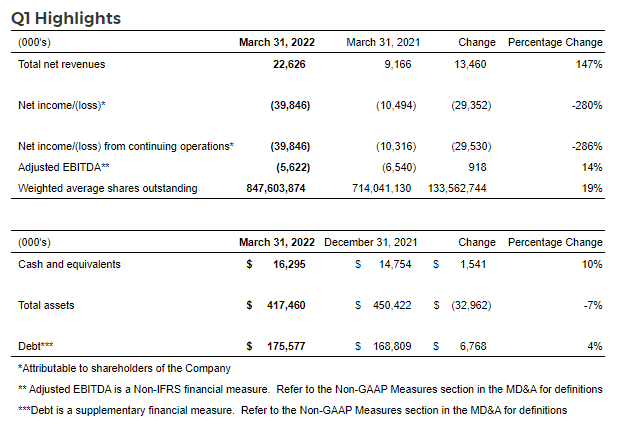 Though this quarter presented some ongoing supply chain and operational challenges preventing us from meeting consumer demands for our branded cannabis products, we believe we have taken the necessary steps to correct these issues for the coming quarters, allowing us to increase fill rates and continue with our exciting new product launches throughout the year. 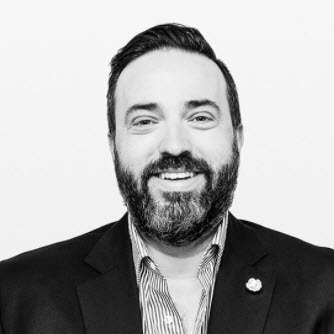 We continue to lead the market in cannabis 2.0 products and remain focused on building to leadership in dried flower and pre-rolls and improving our business to achieve our goal of reaching adjusted EBITDA profitability. 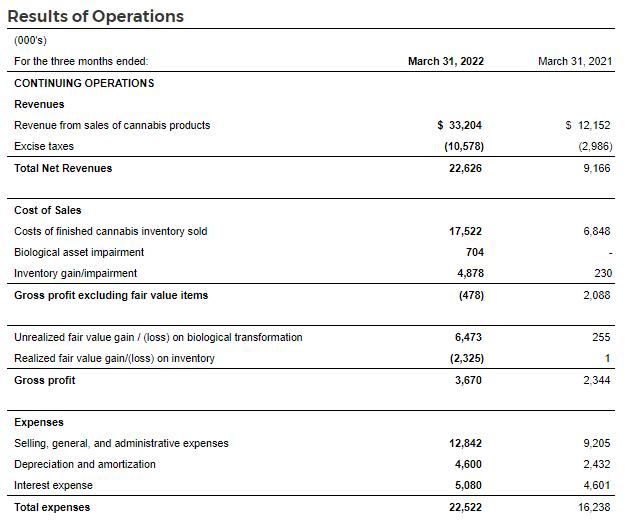 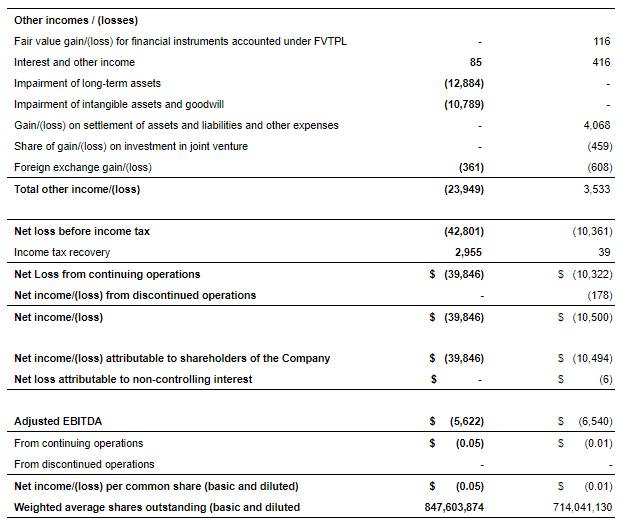 For the three months ended March 31, 2022, net revenues were $22.6 million as compared to $9.2 million during the same period in 2021, an improvement of 147%. Revenue in the first quarter of 2022 was comprised of approximately 61% in Cannabis 2.0 Product sales, with the remainder from Cannabis 1.0 Product sales. Net revenues improved as a result of the Company’s expansion into Cannabis 1.0 Products and continued leadership in Cannabis 2.0 Products. Consistent with prior periods, as the Company does not participate in the Quebec market, approximately 85% of cannabis sales during the first quarter of 2022originated from sales to British Columbia, Alberta and Ontario.

Auxly realized a gross profit of $3.7 million resulting in a 16% Gross Profit Margin1 for the quarter ended March 31, 2022, compared to $2.3 million (26%) during the same period in 2021. Gross profits were impacted by the biological assets and inventory impairments of $5.0 million associated with the closure of the Auxly Annapolis and Auxly Annapolis OG facilities as announced on February 7, 2022. Cost of Finished Cannabis Inventory Sold Margin1 was 23%, 2% lower than the same period of 2021, however 3% greater than the fourth quarter of 2021, inclusive of the impact of Auxly Leamington.

Biological and inventory impairments of $0.7 million and $4.9 million respectively were attributable to the closure of the Auxly Annapolis and Auxly Annapolis OG facilities.

Wages and benefits were $5.7 million during the first quarter of 2022, approximately $1.5 million higher than the same period of 2021, primarily from workforce additions to support Cannabis 1.0 Product sales and in support of higher revenues, and the addition of the Auxly Leamington workforce of approximately $0.5 million.

Office and administrative expenses were $3.6 million during the current quarter, increasing by $0.5 million compared to the same period in 2021. The increased expenditures primarily relate to the addition of Auxly Leamington of approximately $0.7 million.

Auxly’s professional fees were $0.4 million during the first quarter of 2022, which was consistent with 2021. Professional fees incurred during the period primarily related to accounting fees, regulatory matters, reporting issuer fees, and legal fees associated with certain corporate activities.

Share-based compensation was $0.2 million for the three months ended March 31, 2022, which was consistent with the same period in 2021. The expense is a function of the number of option grants, the weighted average aging of the grants and the share price at the time of grant.

Selling expenses were $2.9 million for the three months ended March 31, 2022, an increase of $1.6 million over the same period in 2021, as a result of cannabis sales activities comprised of brokerage fees earned by Kindred, Health Canada fees related to higher revenues, and increased marketing initiatives for Cannabis Products.

Depreciation and amortization expenses were $4.6 million for the period ended March 31, 2022, $2.2 million greater than the same period of 2021. The increase in expense during the current period is primarily related to additional capital expenditures and inclusion of Auxly Leamington representing approximately $0.7 million.

Interest expenses were $5.1 million in the three months ended March 31, 2022, an increase of $0.5 million over the same period in 2021 primarily as a result of the inclusion of Auxly Leamington, which accounted for approximately $0.9 million. Interest expense includes accretion on the convertible debentures and interest paid in kind on the $123 million Imperial Brands Debenture. Interest payable in cash was approximately $1.4 million for the current quarter.

Total Other Incomes and Losses

Total other incomes and losses for the quarter were a $23.9 million loss as compared to a gain of $3.5 million during the same period in 2021.

The impairment of long-term assets of $12.9 million and intangible assets and goodwill of $10.8 million respectively in the first quarter of 2022 relates to the closure of the Auxly Annapolis and Auxly Annapolis OG facilities where the carrying value exceeds the fair value less cost to sell.

The share of loss on investment in joint venture of $0.5 million represents the Company’s proportionate share of Auxly Leamington’s earnings prior to its acquisition in November 2021, which results are presently consolidated into the Company’s financial statements.

Auxly is exposed to foreign exchange fluctuations from the U.S. dollar to CAD dollar exchange rate primarily related to inventory, capital purchases and Inverell net assets. During the period ended March 31, 2022, the Company reported a foreign exchange loss of $0.4 million as compared to a loss of $0.6 million during the same period of 2021.

Net losses attributable to shareholders of the Company were $39.8 million for the three months ended March 31, 2022, representing a net loss of $0.05 per share on a basic and diluted basis. The loss of $29.4 million relative to the same period in 2021 was primarily related to the net impact of approximately $25.7 million related to the closure of the Auxly Annapolis and Auxly Annapolis OG facilities during the period and a gain on the settlement of assets and liabilities and other expenses of $4 million in 2021.

On May 27, 2021, the Company announced that it had reached an agreement to sell KGK to Myconic Capital Corp. (now Wellbeing Digital Sciences Inc.) (“Wellbeing”), and on June 2, 2021, completed the sale of KGK to Wellbeing. As a result of the sale, results from operations and cash flows from KGK have been presented as discontinued operations, as applicable, on a retrospective basis.

In 2022, Auxly remains committed to building on its success as a Canadian market leader. The Company plans to drive organic growth through continued innovation, increased brand traction, and ubiquitous distribution, while prioritizing operational efficiencies and profitability. The Company’s high-level objectives for 2022 are:

The Company is pleased with its first quarter results, with seasonality having had less of an impact on revenue as compared to the same period in 2021. However, it did encounter operational challenges throughout the quarter, such as lower winter yields at Auxly Leamington and hardware and packaging shortages due to supply chain disruptions.  The Company believes that those challenges are largely behind it, and is very encouraged by yield and overall product quality improvements that it has seen at Auxly Leamington, which it believes will better equip Auxly to meet the demand for its flower and pre-roll products.

The Company has and will continue to put its consumers first by addressing their evolving needs and preferences through its industry leading, insight-driven innovation pipeline. During the first quarter of 2022, Auxly successfully launched 10 of the anticipated 60 new SKUs planned to be launched throughout the year, to strong early results and consumer acclaim. Auxly continues to prioritize investing in innovations for key growth categories, while maintaining its standards for producing the high-quality products that are contributing to its growing consumer awareness and brand equity.

Finally, the Company remains focused on cost control and margin enhancement through continued process improvements and investments in automation.  While its first quarter SG&A now includes a full quarter of Auxly Leamington expenses for the first time, the Company was still able to maintain flat SG&A compared to the previous quarter and also continue to make improvements to Adjusted EBITDA.  The Company remains confident in its second quarter sales outlook and in its ability to achieve Adjusted EBITDA profitability in 2022.

Please see the Company’s MD&A dated March 30, 2022, under “Non-GAAP Measures” for a further description of the following financial and supplementary financial measures.

These are non-GAAP measures used in the cannabis industry and by the Company to assess operating performance removing the impacts and volatility of non-cash and other adjustments. The definition may differ by issuer. The Adjusted EBITDA reconciliation is as follows: 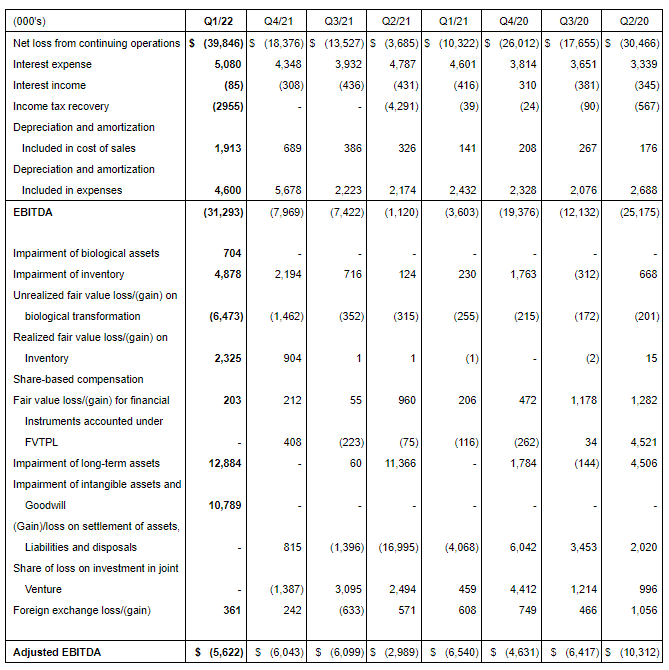 ON BEHALF OF THE BOARD

Auxly is a leading Canadian cannabis company dedicated to bringing innovative, effective, and high-quality cannabis products to the wellness and adult-use markets. Auxly’s experienced team of industry first-movers and enterprising visionaries have secured a diversified supply of raw cannabis, strong clinical, scientific and operating capabilities and leading research and development infrastructure in order to create trusted products and brands in an expanding global market.