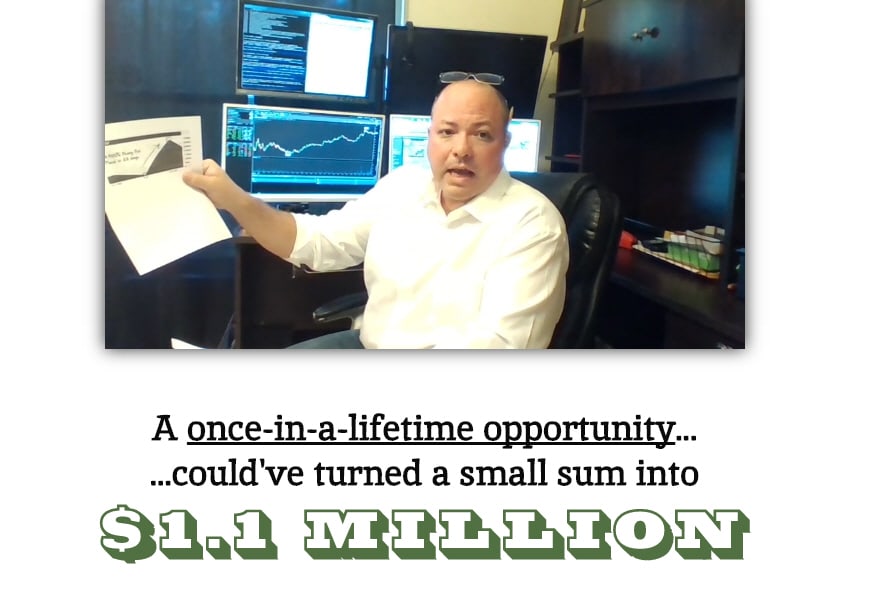 We have been monitoring the over-the-top marketing efforts of Agora Financial over the past several months as it has been promoting get-rich-quick schemes for traders in cannabis penny stocks. The most recent pitch for a new service called “Penny Pot Alert” is perhaps the most offensive campaign to date. You can listen to a very long pitch or read the written one.

Agora Financial Editor Ray Blanco introduces the topic, discussing how he has “cracked the code” to discover “the secret of monthly marijuana millionaires.” The entire premise is that he and his supercomputer can help identify “penny pot flashes” in advance. The narrative begins with some examples of huge gains in the past, the first of which is for Hemp, Inc. (OTC: HEMP): 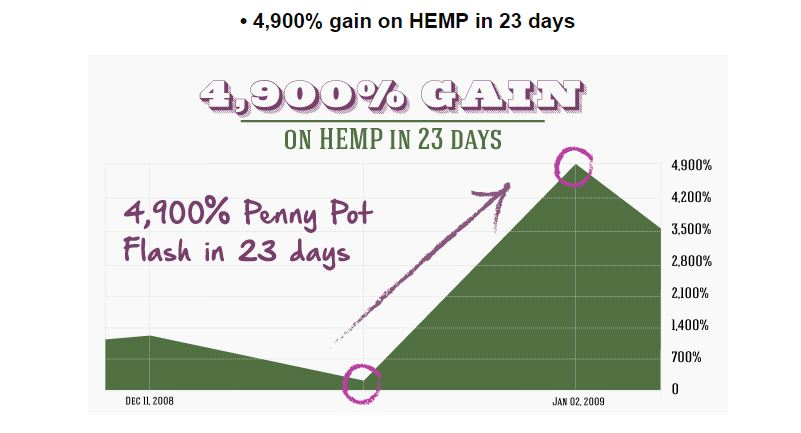 There is a huge problem with this example, as HEMP didn’t begin trading publicly as that company until 2011, though the example goes back to 2008. Further into the pitch, he makes the exact same error discussing Supreme Pharmaceuticals (CSE: SL) (OTC: SPRWF) as he explains how “4 simple moves could have made you a marijuana millionaire in just 33 days”:

On Tuesday, Dec. 17, 2013, you could have picked up over 100,000 shares of Supreme Pharmaceuticals, a federally licensed medical marijuana producer, for just $500.

But that’s their loss, they couldn’t recognize this “Penny Pot Flash” brewing behind the scenes…

Supreme didn’t become a federally licensed medical marijuana producer (in Canada) until early 2016. In fact, in 2013, the time-frame for Ray Blanco’s example, it wasn’t even pursuing the cannabis market, which it entered in mid-2014. These prices not only are incorrect but were also not available for the 100K shares in the example. Quite simply, this is a false example.

Another example cited, Mentor Capital (OTC: MNTR), was not possible as well:

Over 10 times the initial price.

This hypothetical creation of $1.1mm on an investment of only $500 over the course of five weeks is built on a false base, with two of the four transactions not possible or just plain incorrect. It also required perfectly timed trades. Most importantly, though, the trades all took place at a time that produced truly irrational price action that is not likely to ever be met again. In early 2014, there was an incredible surge in demand for cannabis penny stocks but only a limited supply. Today, that is no longer the case, with hundreds of names trading.

The stock traded at just 31 cents.

But only 4 days and one Penny Pot Flash later, the stock soared to $252…

A couple of things here. First, ZDPY wasn’t a cannabis stock back then, not even close. Second, the stock didn’t actually go up 80,669%. Instead, it did a 1 for 300 reverse stock split! Each share was worth only 1/300th of its previous fractional ownership of the company. This explains almost 30,000% of those mythical gains. I seriously doubt the volume was there to take $711K and turn it into over $6.6mm, as Ray Blanco cites in his example.

And this happened in less than 24 hours…

That could change your life quick, couldn’t it?

That’s the power of these Penny Pot Flashes.

Yes, imagine that! Unfortunately, that’s all one can do, as Blanco erred yet again! This is a completely wrong observation, as RMHB didn’t do much of anything on May 26, 2016 but rather had a bad quote on May 25 (source Yahoo):

Blanco and Agora Financial are charging $3000 for lifetime membership to this service designed to spew out millionaires ($99 per year maintenance charge after the first year). He claims that he is limiting this non-refundable service to only 250 people, meaning the service has a gross potential of $750k. This begs the question of why give away the golden goose? If Blanco’s supercomputer and system in which he has allegedly invested $250K can really turn a few hundred dollars into millions, why bother with a service that limits his gains to just $750K?

The answer is simple: Blanco is selling dreams. He even downplays it as his pitch nears an end, suggesting maybe his readers will perhaps make “only $10,000” on their $3000 subscription and a small investment.  Agora Financial should be ashamed of itself for its false advertising and aggressive marketing practices. Of course, it’s not the first time. I wrote previously about how Stansberry Research, another newsletter from Agora Financial, botched a cannabis pitch.

The bottom-line is that Ray Blanco and his publisher, Agora Financial, have created the false illusion of the opportunity in cannabis penny stocks by using inaccurate or impossible examples, omitting things like reverse splits, not considering the fact that the company wasn’t a cannabis company at the time, not taking into account the lack of trading at the time of the example or just plain getting it wrong.