After sequential declines in June, most of the markets that cannabis data analytics firm BDSA covers saw advances during July, a month with one extra day. Tough comparisons from a year ago, when sales surged during the pandemic, resulted in relatively weak annual growth in most markets, with some even declining. In this review, we will look at the markets one-by-one, beginning with the more mature Western markets and then concluding with the newer Eastern markets.

BDSA provides coverage for Arizona, California, Colorado, Nevada and Oregon. In July, growth ranged from -14% in Colorado to 27% in Arizona compared to a year ago.

Arizona transitioned to adult-use in late January, but this is the fourth month that BDSA has included adult-use sales. Total cannabis sales grew 27% to $119.8 million, with adult-use representing $55.5 million, up 2% from June. Medical cannabis sales fell 32% from a year ago to $64 million. Sequentially, overall growth increased 1.7%, with medical flat and adult-use increasing 4%. Growth was strong across all categories, but the highest growth by far was in pre-rolls, which gained 175%. 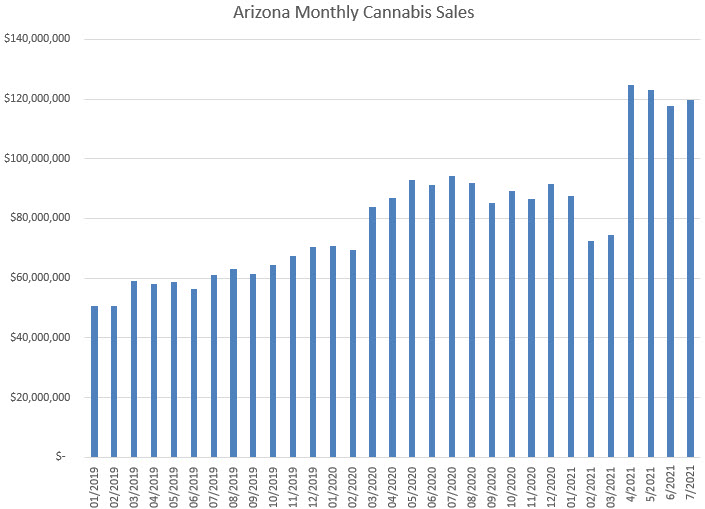 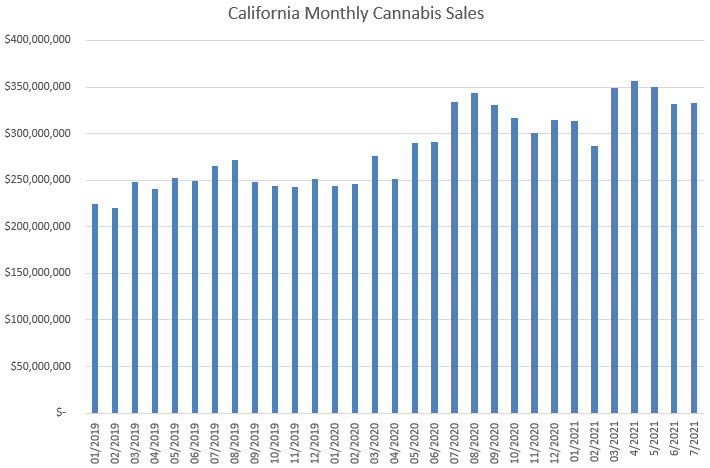 The mature market of Colorado, which has shown vigorous growth over the past year, declined 14% compared to a year ago, increasing 6.6% from June to $195.6 million. Flower sales fell almost 30% from a year ago, while pre-rolls expanded 14%. Concentrates and ingestibles were little changed from year-ago levels. 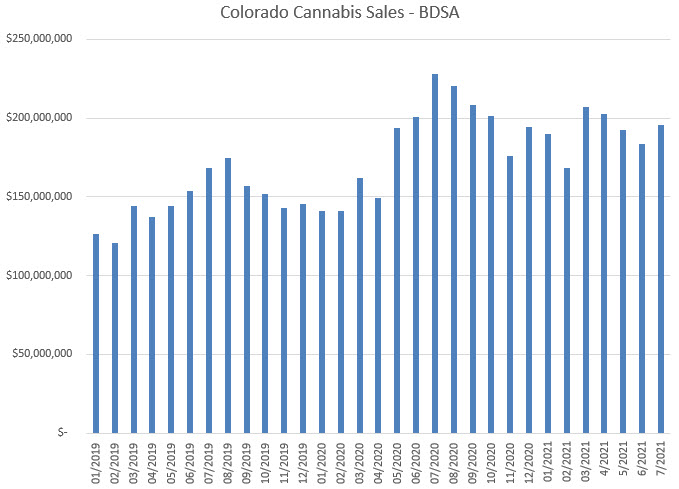 With the full reopening of Las Vegas behind it, Nevada’s July sales were surprisingly weak, advancing just 2% sequentially to $81.4 million, down 0.7% from a year ago. Flower fell 8%, while other categories advanced by 6-13% compared to a year ago. 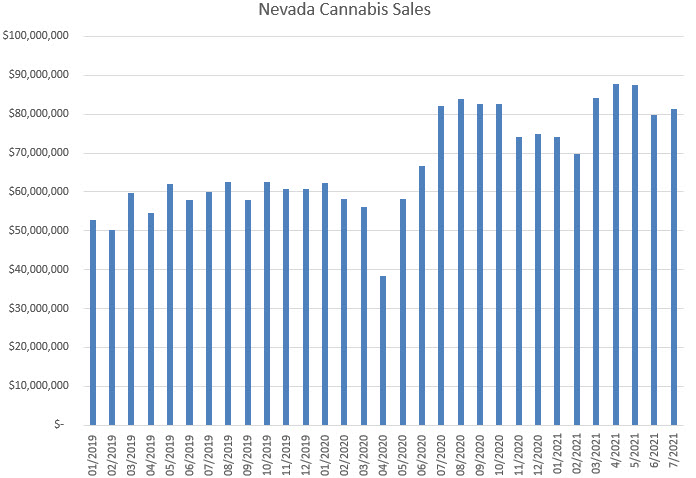 Oregon, another mature market that had explosive growth following the pandemic, declined year-over-year by 2.6% to $103.1 million, up 4% sequentially. Pre-rolls expanded by 16%, while concentrates grew 7%. Flower sales declined by 11%, while ingestibles fell by 6%. 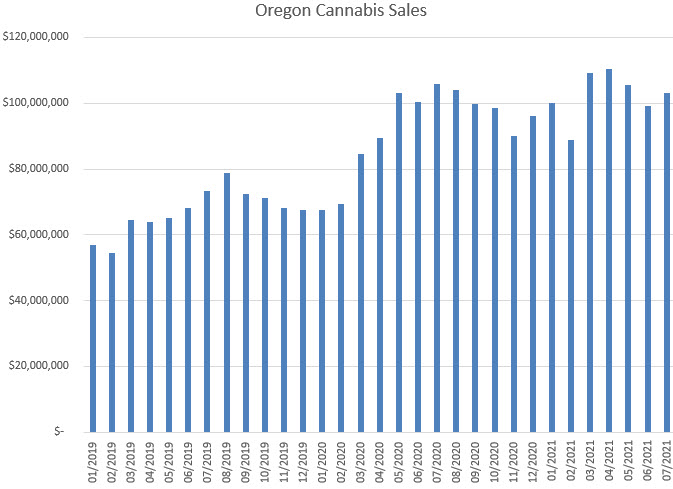 In the newer markets, the annual rate of growth continued to slow. Note that BDSA has begun providing data for Florida, Michigan and Pennsylvania as of January. Florida sales decreased 3% sequentially from a record $155.7 million to $151.5 million, while Pennsylvania’s bounced back from two monthly declines to a record $110.3 million, up 7% from June . Michigan, which we previously detailed, saw overall sales jump 15% from June to $171 million, up 56% from a year ago. BDSA, which includes accessories, reported a lower level of sales for July at $162.9 million.

Illinois combined adult-use and medical sales rose 4% in July, including accessories, to $153.2 million, which was up 62.6% from a year ago. Flower lagged other categories, increasing 55%, with pre-rolls at 86%. Concentrates expanded 67%, while ingestibles grew 56%. Adult-use sales, according to data from the state, increased 91% in August to $122 million. 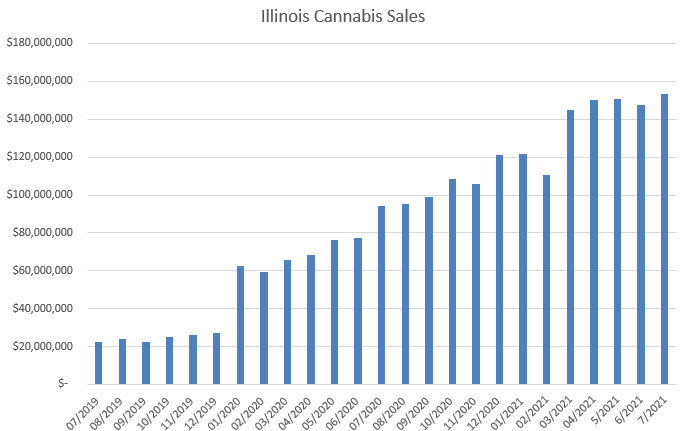 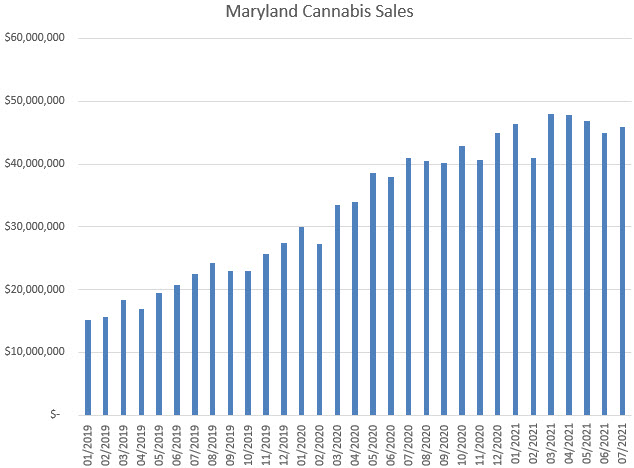 Massachusetts sales grew 63% from a year ago to a record $149.6 million, up 15% sequentially. Flower was the weakest category, growing 33%, while pre-rolls expanded 144%. Ingestibles and concentrates grew 97% and 65%, respectively. 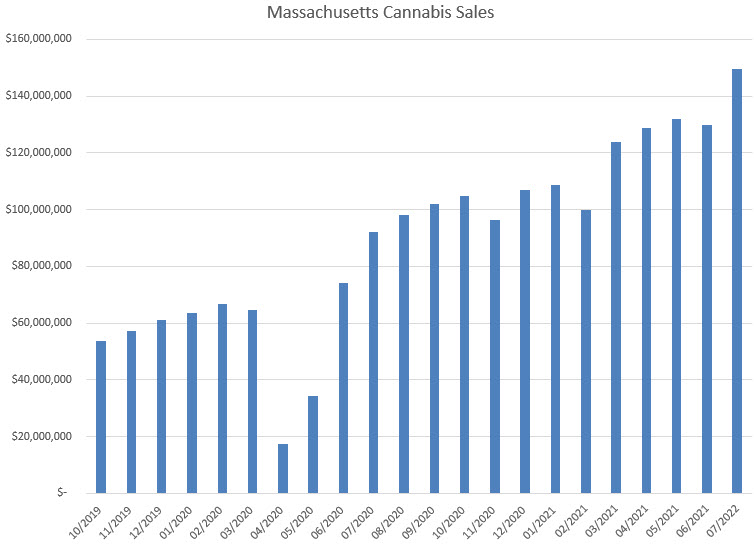