Health Canada released monthly data today on its medical cannabis program. Until this release, all of the data had been quarterly. At the end of June, there were 201,398 active clients, representing 168% growth from a year ago and 20% growth from the prior quarter. While this is very strong growth, it reflects a slowdown from the 29% growth in the prior quarter ending in March and the 32% growth in the quarter ending in December. The 20% sequential quarterly growth was the lowest since March 2015. 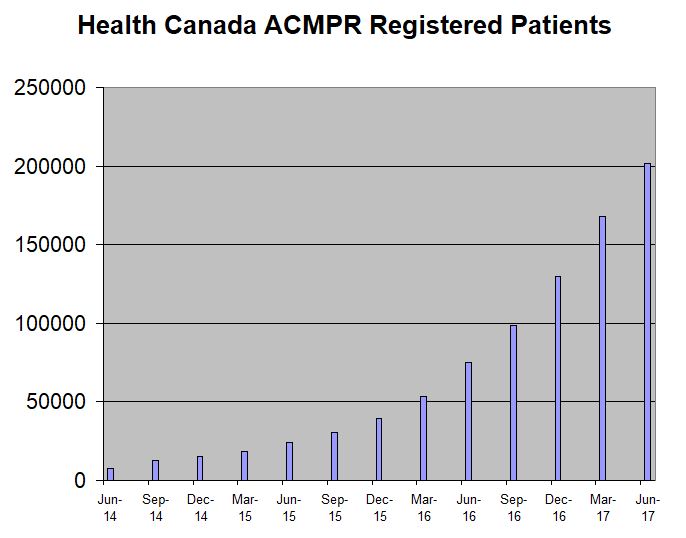 For the first time, Health Canada reported data by province of residence, including client registrations with LPs or for personal or designated production (6880, including 6374 personal producers and 506 designated growers). Health Canada also reported 2786 health care practitioners who provided a medical document to a patient during June.

The data revealed that the LPs have done very well in Alberta and Ontario but have not achieved much penetration into British Columbia or Quebec. In total, 79.6% of all LP patients at the end of June resided in Alberta or Ontario, which together represent 50% of the Canadian population, while just 6.8% lived in BC or Quebec, which together represent 36% of the Canadian population. Several smaller provinces make up the bulk of the remainder. 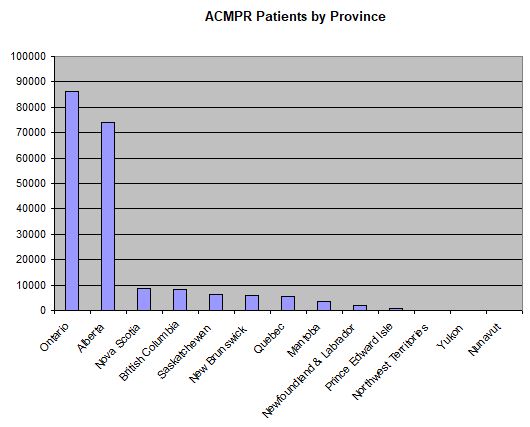 It’s not surprising that BC shuns the LPs given the abundance of dispensaries that operate in the grey and black markets. The low penetration in Quebec may be due to the requirement that all patients must join a registry. 32 of the 58 licenses issued to date are for facilities in Ontario, while only 1 has been issued in Quebec.