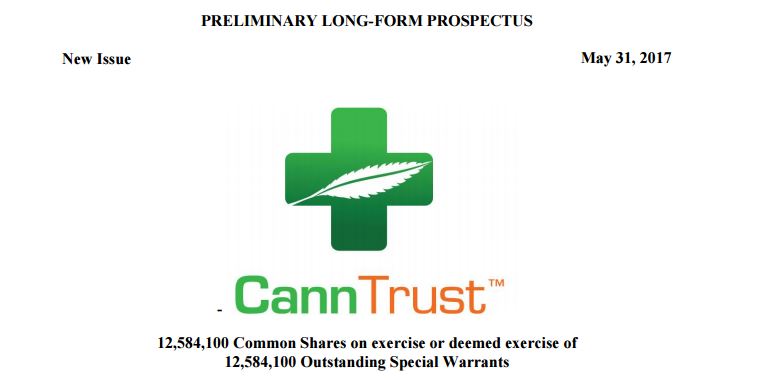 CannTrust Holdings, the parent of Canadian licensed producer CannTrust, has filed a preliminary prospectus detailing its offering of 12.5841mm Special Warrants at $2 per warrant, for $25.2mm in gross proceeds. The securities were issued in February, with Bloom Burton Securities acting as placement agent for 9.9065mm warrants and the balance sold concurrently by the company. The securities will be redeemed for common shares either after February 16, 2018 or earlier if the shares are approved for listing on a recognized exchange. The company last raised capital in December at $1.30 per share, selling 3.4mm shares.

The prospectus provides a lot of information not previously available about the company, which operates a 40K sq. ft. facility in Vaughan, Ontario with potential annual capacity of 2.5mm grams. At present, it is authorized by Health Canada to produce 2.3mm grams of dried flower and 2000 kg of cannabis oils. CannTrust, through its wholly-owned subsidiary Elmcliffe Investments, acquired a greenhouse facility in Fenwick, Ontario in March for $7.5mm. The company expects to invest an additional $18mm initially into the Phase 1 development and construction.

CannTrust reported 2016 sales of $4.382mm, with an operating loss of $1.557mm. In Q1, it generated sales of $3.033mm with an operating profit of $1.295mm as the company benefitted from a shift in mix from dried flower to oils. The Q1 sales place CannTrust among the top LPs in terms of revenue. The company ended Q1 with total assets of $44.03mm and shareholder’s equity of $37.9mm.

CannTrust Holdings, which employs 90 as of April 30th, also owns 50% of Cannabis Coffee & Tea Pod Company, a JV with Club Coffee, L.P. The companies have received a patent with respect to single-serve containers for use in brewing a cannabis-based beverage and have licensed the I.P. to Lighthouse Strategies for use in Arizona, California, Colorado, Nevada, Oregon and Washington. According to the company, “BrewBudz™ is a U.S. patented unit dose pod formulation allowing the administration of cannabis using single-serve brewing pods for use in Keurig, Nespresso, and Tassimo type brewers.”

CannTrust Gets Protection from Creditors and Class-Action Plaintiffs