With Canadian licensed producers under intense selling pressure over the past several weeks, insiders stepped up at three licensed producers, making large purchases over the past week or so on the open market. In general, as measured by the Canadian Cannabis LP Index, stocks have been under pressure since peaking in January, with the index declining to as low as 800 on April 4th, down 44% from its closing high set of 1438.87 on January 9th: 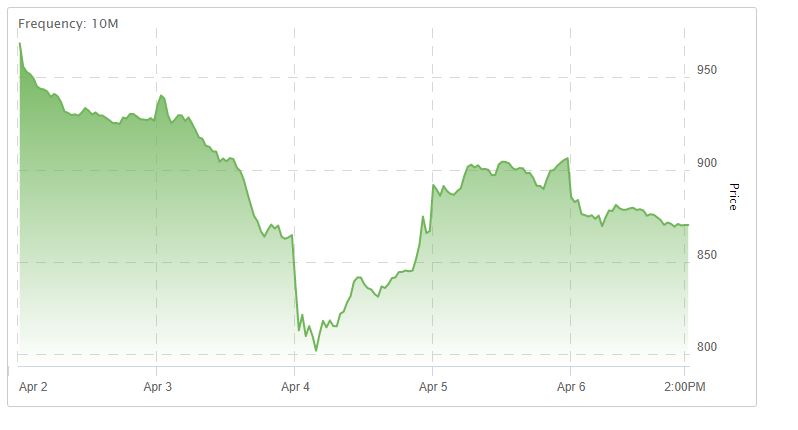 Two executives at Aurora Cannabis (TSX: ACB)(OTC: ACBFF) made purchases on March 28th, according to Canadian Insider. Chief Corporate Officer Cam Battley purchased 27,685 shares at C$9.04, while Ronan Levy, VP, Business and Corporate Affairs, bought 27,000 shares at 9.19. Levy had recently sold 50,000 shares at C$11.56, while Battley had sold 100,000 shares in late November at $8.46. Battley told New Cannabis Ventures that he is optimistic about the company’s future and felt the decline in price afforded him an opportunity to increase his stake, which is now 94,039 shares. ACB shares peaked at C$15.20 earlier this year.

Canadian Insider reported two buys in Cronos Group (TSXV: CRON) (NASDAQ: CRON) of 200K shares by CEO Michael Gorenstein and Director Jason Adler on April 4th at $US5.27, near the lows of the day and dramatically below the recent C$100 million bought deal at C$9.60. According to Gorenstein, the entity that acquired the shares was Gotham Green Fund, with which he and Adler are affiliated. CRON shares peaked at C$14.83 earlier this year.