After what seems like an unacceptably long delay, Health Canada, which oversees the Canadian medical cannabis program, ACMPR, reported data for the quarter ending 06/30/16 on Friday. The number of patients enrolled in the program grew 40.1% from the prior quarter to 75,166.  This represented growth of 214% from a year ago and an acceleration from the 35.2% sequential growth reported in the prior quarter.  The quarter represented the largest single patient addition since the inception of the program on 4/1/14 and further demonstrated that program continues to see rapid enrollment. 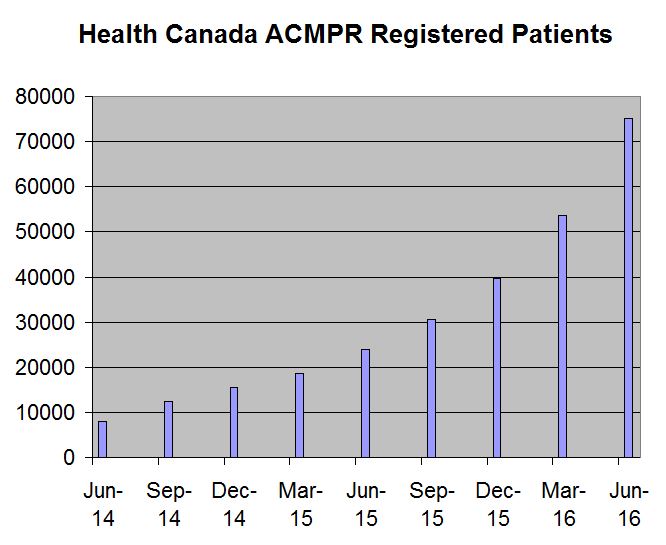 Enrollment today is likely more than 100K, even with a slowing of the growth rate. Health Canada had suggested that by 2024 the patient enrollment could reach 425K, but this number, which is 1.2% of the population, is likely too conservative.  In the first two years, the program added over 53K patients, with growth of 190% in the second year.  If the growth slows to 150% this year (despite the acceleration in the first quarter), 100% in the following year, 50% in the year-ending March 2019 and 25% in the year ending in March 2020, enrollment would be  over 500K and still below the 2% or so penetration rates seen in places like Colorado and Israel. With a lower tax-rate presumably for medical cannabis than legal non-medical cannabis, the growth rates could continue at rates higher than this assumption.

Data shared by Health Canada points to slightly lower per capita consumption, reported at 0.91 grams per day for the quarter ending 06/30 (based on order shipment size), which fell from 1.03 in the quarter ending 03/31 and 1.12 in the quarter ending 12/31.  Licensed Producers (LPs) continue to produce at a higher rate than consumption, pushing inventories slightly higher. During the quarter, LPs sold 4.037mm grams of dried cannabis, up 31% from the prior quarter, but produced 5.014mm grams, with inventory increasing 10.2% from 10.695mm grams to 11.788mm grams.  Oils, which were introduced in late 2015, showed torrid growth in sales at 1.5mm grams, up 157% from the prior quarter. Inventory in oils remained somewhat tight at 2.038mm grams.

For a more contemporaneous view of the near-term dynamics, Canopy Growth (TSX: CGC)  (OTC: TWMJF) and Mettrum (TSXV: MT) (OTC: MQTRF), two of the leading publicly-traded LPs in terms of sales, will be reporting their FY17 second quarter ending 09/30 results in November.