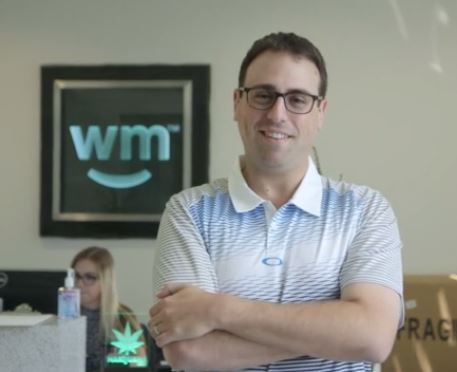 Justin Hartfield isn’t like you and me. Instead of turning Hartfield into a couch potato, marijuana has turned him into a serial entrepreneur. Hartfield says more than 95% of America’s delivery services and dispensaries list on Weedmaps, paying anywhere from $295 to thousands of dollars per month to appear on the site.  Through a holding company called Ghost Group, Hartfield also owns two companies that make point-of-sale software used by cannabis dispensaries in the United States and in Spain. In the coming months, Weedmaps will launch an online store for vendors to display cannabis products and to sell ancillary marijuana products such as T-shirts and baseball caps.  Hartfield declined to reveal the company’s finances, but last year he told reporters that revenues were $30 million. Weedmaps has only grown since then.

Hartfield is 31 and boyish with black glasses, close-cropped dark hair and an easy smile. He could be a management consultant or a CPA if he weren’t sitting in his office in a black leather armchair, wearing khaki shorts and bright turquoise flip-flops. But California is the hub of America’s marijuana industry, and Weedmaps, with its base in Irvine, a suburb of Los Angeles, is one of the industry’s most influential players. Don’t let the flip-flops fool you.