A few weeks ago, we expressed concern about a sharp deceleration in cannabis sales during November. After reviewing data from BDSA for December in five mature western markets and 3 newer eastern markets, we conclude that the slowdown in November was not meaningful.

BDSA provides coverage for Arizona, California, Colorado, Nevada and Oregon. In December, growth ranged from 23% in Nevada to 42% in Oregon compared to a year ago. These were all higher than the year-over-year growth rates last month.

During December, Arizona medical cannabis sales totaled $91.6 million, which was up 6% from November and 30% from a year ago. Flower, the largest part of the market at 50%, grew by 29%. Concentrates grew 39%, while pre-rolls, a small part of the market, grew 62%. 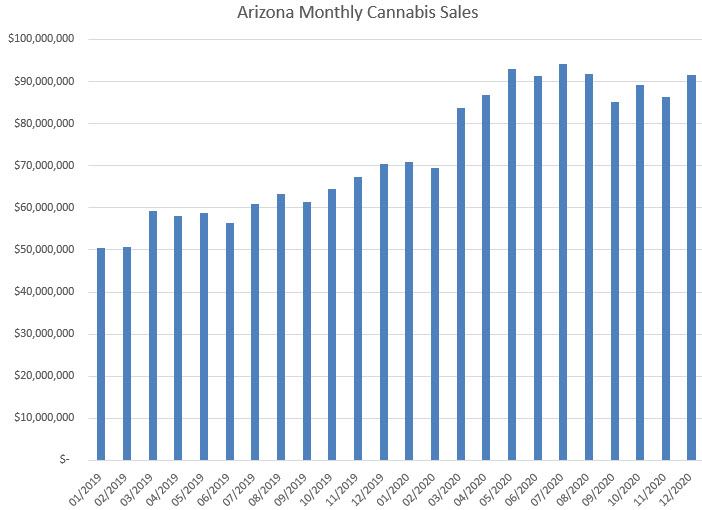 Sales in California expanded 5% sequentially and 25% from a year ago to $314.2 million during December. Flower continues to be the fastest growing category, increasing 41% from a year ago and representing 39% of the market. 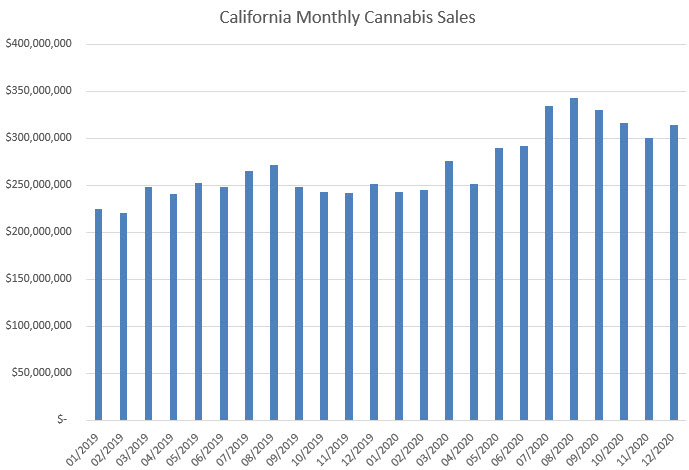 The most mature adult-use market, Colorado, continues to grow strongly. In December, sales increased 34% from a year ago and 3% sequentially to $194.2 million. Flower, at 43% of the market, grew 40% from a year ago. 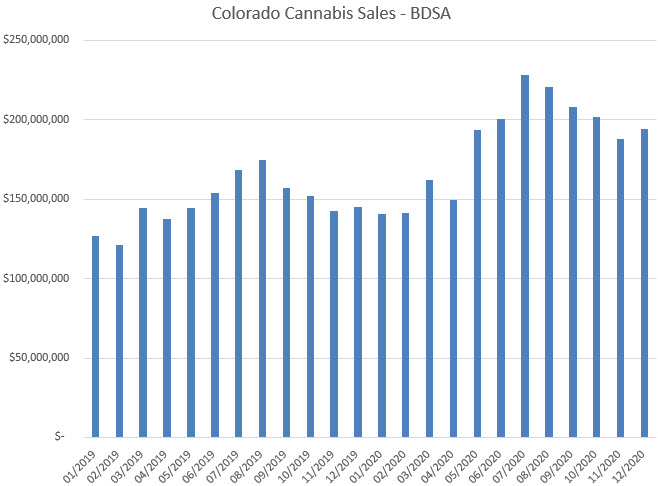 The downturn in tourism appears to be weighing on Nevada, which grew just 1% sequentially and 23% compared to a year ago to $74.8 million. Flower, which represented 50% of the market, grew 43% from a year ago. Pre-rolls and edibles declined. 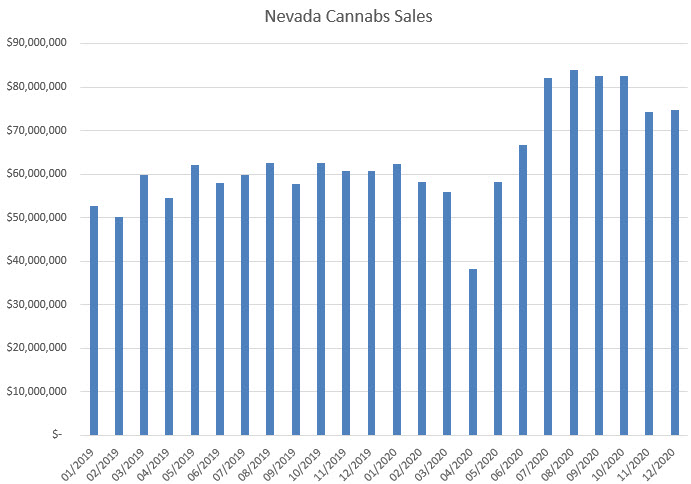 Sales in Oregon spiked higher, with the year-over-year growth rate well above recent months at 42%. During the prior four months, growth had ranged from 32% to 39%, while during May, June and July it ranged from 45% to 58%. At $96 million, cannabis sales increased 7% sequentially. Flower, which was 44% of the market, grew in line with overall sales, but concentrates and pre-rolls grew faster, at 54% and 46% respectively. 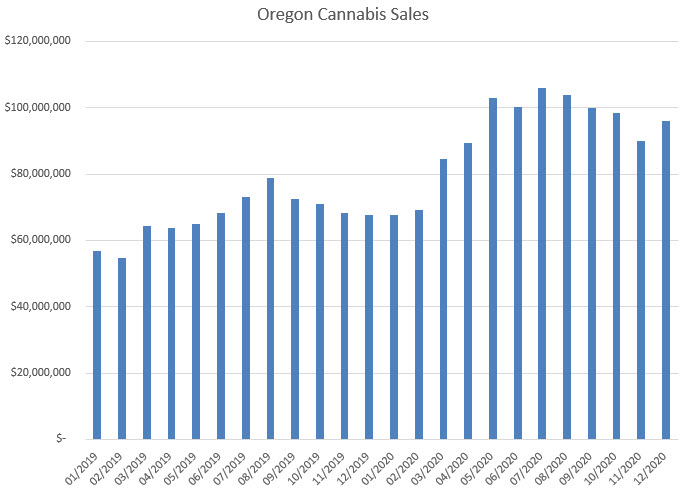 In the newer markets, the rate of growth also accelerated from November. In these states, sequential rates can be important to monitor as well, and they ranged from 10% growth in December compared to November for Maryland to 15% for Illinois. Note that we wrote about January data for Illinois based on the state’s data yesterday, observing that sales were flat in January compared to December. BDSA provides more comprehensive data than the state, breaking into product types.

December completed the end of the first full year of adult-use sales in Illinois, with overall cannabis sales rising 343% compared to a year-ago, before adult-use sales commenced. Sales grew 15% sequentially to $121.3 million. Interestingly, flower and concentrates are about equal in size at 34% and 33% respectively. Ingestibles, which were 18% of the market, grew 404% from a year ago. 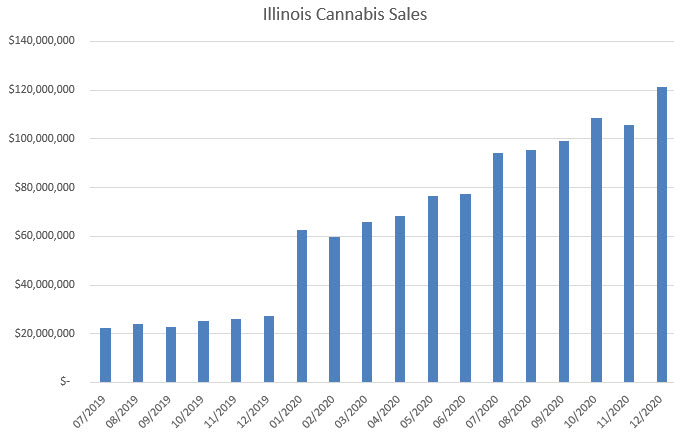 December represented record sales for Maryland’s medical cannabis program as well, which reached $44.9 million, up 63% from a year ago and 10% from November. Flower, which was 48% of the market, grew 72%. 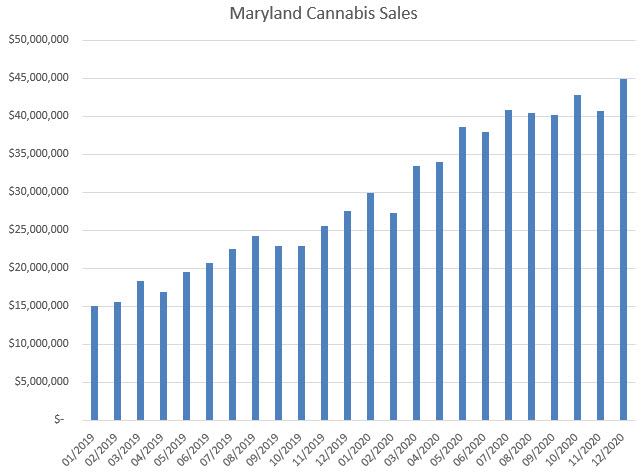 Sales in the combined adult-use and medical markets of Massachusetts also set a record in December, rising 11% from November and 75% from a year ago to $106.9 million. This market remains stunted by a lack of stores. Flower was the largest category at 41%, and it grew at only 30%. Growth was driven by concentrates, which grew 410% and represented 27% of the market. 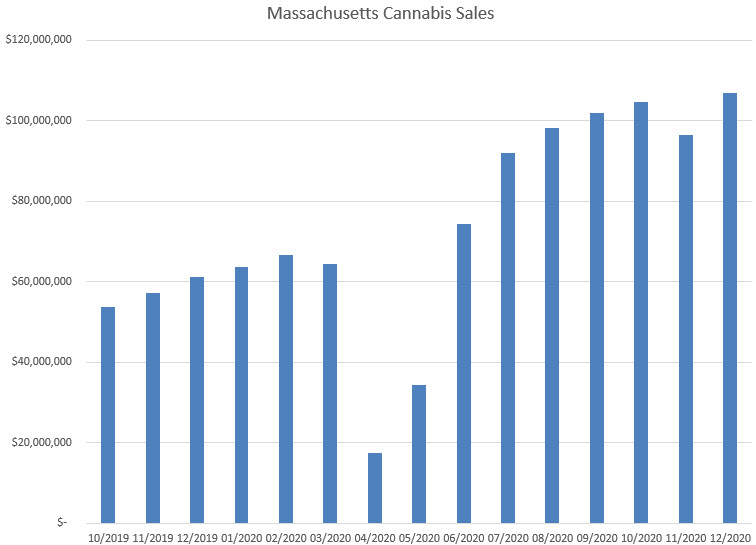 For readers interested in a deeper look at cannabis markets across these eight states and more, including segmentation by additional product categories, brand and item detail, longer history, and segmentation by product attributes, learn how the BDSA GreenEdge Platform can provide you with unlimited access to the most accurate and actionable data and analysis.