The stabilization of the growth in cannabis sales during November after tough comparisons in recent months was again evident in December across markets covered by cannabis data analytics firm BDSA. Even taking into account the extra day compared to the prior month, several markets exhibited strong growth, especially those in the East, which tend to be dominated by MSOs. Flower sales in almost all markets grew substantially slower than other categories.  In this review, we will look at the markets one-by-one, beginning with the more mature western markets and then concluding with the newer eastern markets.

BDSA provides coverage for the relatively mature markets of Arizona, California, Colorado, Nevada and Oregon. In November, growth ranged from -14% in Nevada to 27% in Arizona compared to a year ago.

Arizona transitioned to adult-use in late January last year, but this is the ninth month that BDSA has included adult-use sales. Total cannabis sales grew 26.7% from a year ago and 6% sequentially to $116 million. Medical fell 40% from a year ago but rose 5% from November to $55.1 million. Adult-use sales of $60.9 million increased 7% sequentially. Flower grew 7% from a year ago after having declined 1% in November, while pre-rolls were the leading category at +167%. Ingestibles grew 44%, and concentrates expanded 32%. 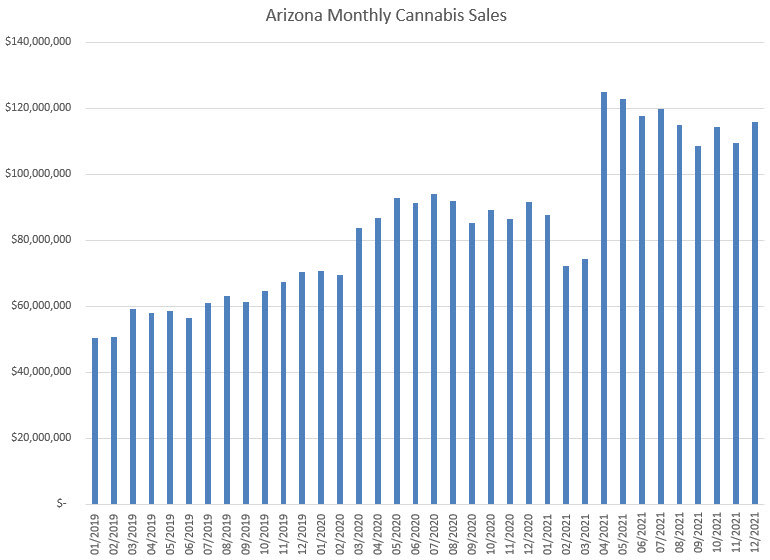 Sales of $304 million increased 5% from November but declined 3% from a year ago, a substantially slower pace than the steep declines from August to October and similar to the 4% decline in November. Flower fell 17% from a year ago, the same rate as in November, while other categories expanded. Concentrates grew 1%, ingestibles expanded 6% and pre-rolls increased 23% compared to a year ago. 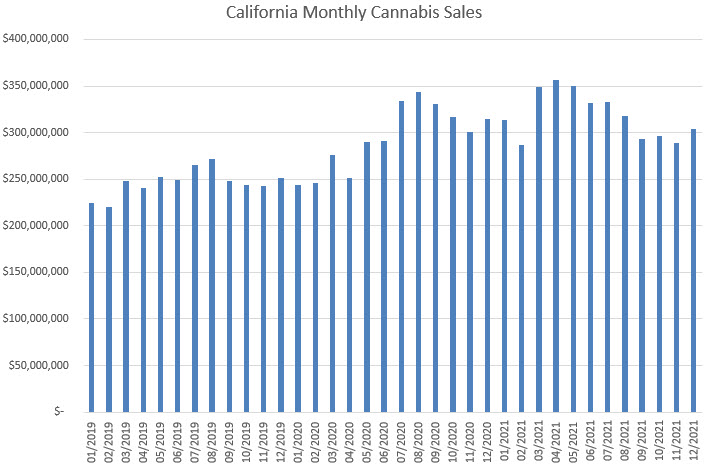 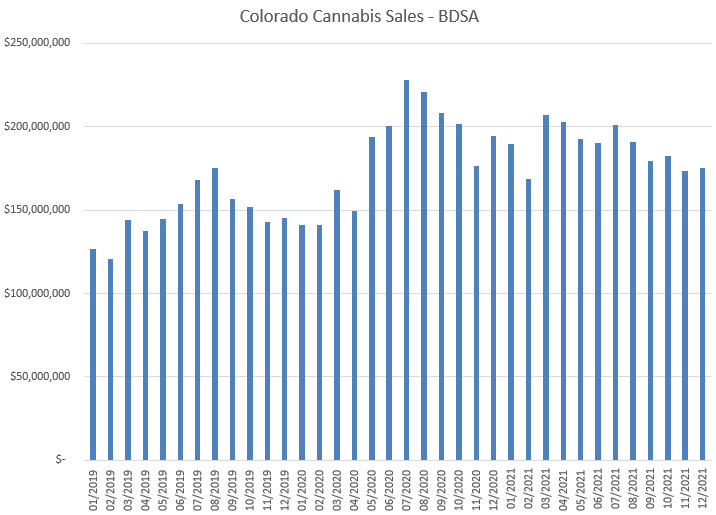 The pandemic continues to challenge the Nevada market, which, at $64.2 million, fell 14% from a year ago and 3% from November. Flower fell 21%, slightly better than the 23% decline in November, while ingestibles were the best category, growing less than 1%. Pre-rolls fell 12%, while concentrates declined 5% compared to a year ago. 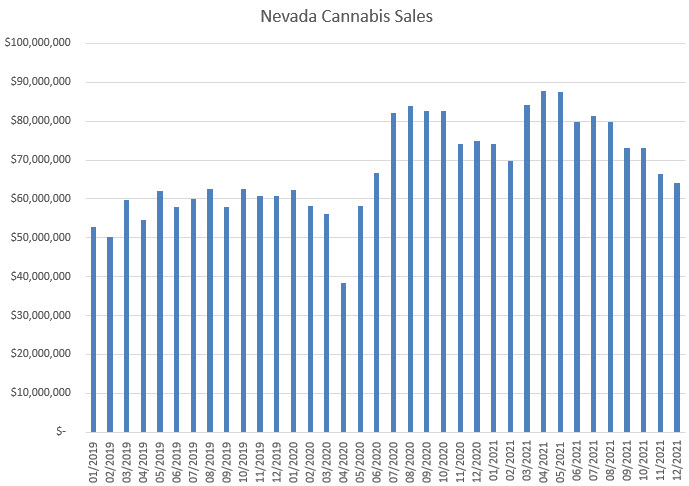 The annual rate of decline expanded in Oregon to 8% as sales increased 3% from November to $88.3 million. Flower declined 16% compared to 14% in November, with pre-rolls expanding by 4%. Ingestibles grew 2%, while concentrates fell 4% compared to a year ago. 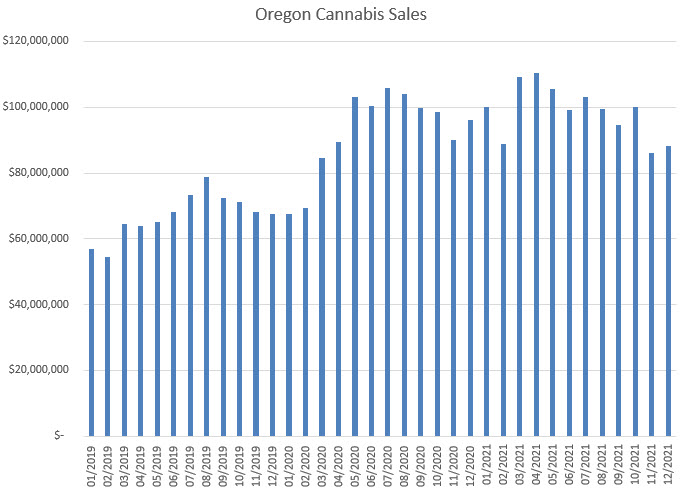 In the newer markets, the annual rate of growth picked up in two of the three markets for which BDSA provides data. Note that BDSA has begun providing data for Florida, Michigan and Pennsylvania as of January 2021. Florida sales soared 14.7% sequentially to $163.8 million, while Pennsylvania rose 7.7% from November to $108.0 million. The strong growth in December is important to the publicly-traded stocks that dominate those markets. Still, both markets experienced small sequential declines from Q3 in Q4, with Florida declining 1.1% and Pennsylvania dropping 2.3%. Michigan, which we previously detailed, saw overall sales increase 10% from November to $168 million, up 66% from a year ago. BDSA, which includes accessories, reported sales for November at $167.67 million, up 9% sequentially. 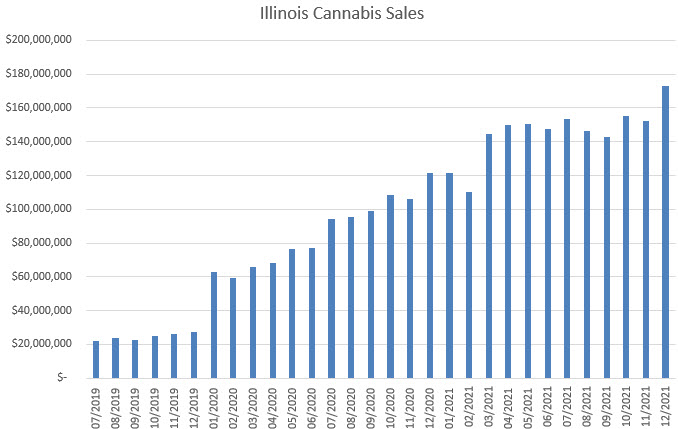 The relatively small Maryland market continues to struggle to grow, with sales of $46.4 million increasing just 3% from a year ago and 6% sequentially. Flower increased 6%, trailing only ingestibles, which increased 16%. Concentrates expanded by 4%, with pre-rolls growing 5%. 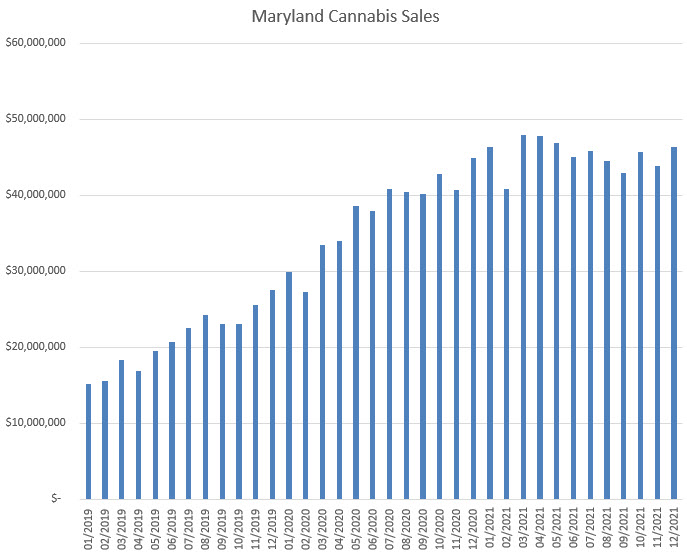 The Massachusetts market was one of the strongest as it set a record in December, with sales of $158 million growing 12% sequentially and 48% from a year ago, the best annual growth since August. Flower sales expanded by 33%, up from 28% in November, while other categories grew 45-71%. 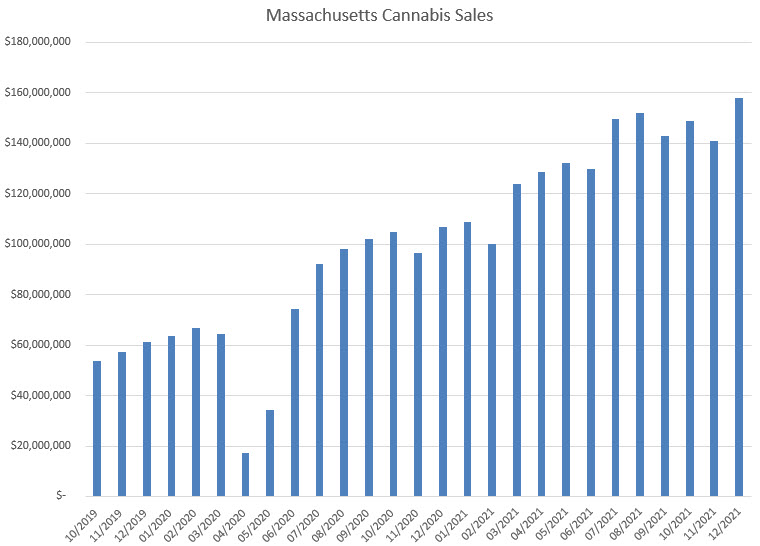