With some easy comparisons in some cases to a year ago and three extra days compared to February, cannabis growth surged in 8 of the 10 markets that BDSA covers in March. In this review, we will look at the markets one-by-one, beginning with the more mature Western markets and then concluding with the newer Eastern markets.

BDSA provides coverage for Arizona, California, Colorado, Nevada and Oregon. In March, growth ranged from -3% in Arizona (medical-only) to 50% in Nevada compared to a year ago.

Arizona transitioned to adult-use in late January, and BDSA is projecting only medical sales, which rose 3% from February to $74.3 million and fell 11% from a year ago. Flower sales fell 8%, while pre-rolls increased 14%. Concentrates declined 11%, and ingestibles plunged by 25%. 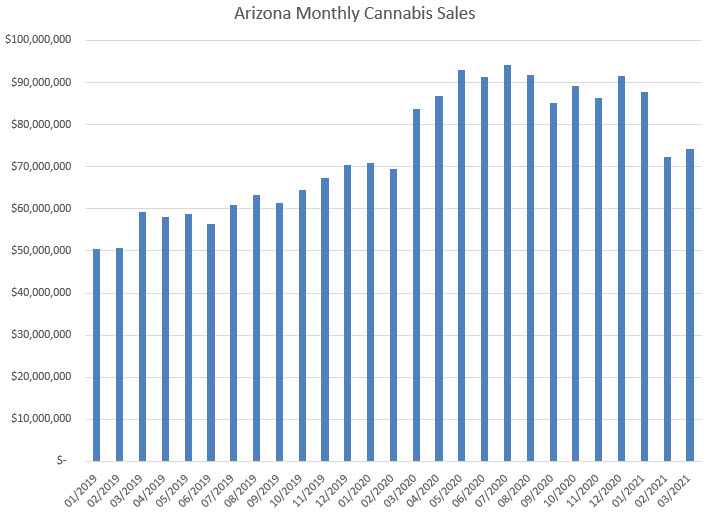 California set a record, with sales of $349 million growing 22% sequentially and 27% from a year ago. In February, annual growth had slowed to 17%, partially impacted by the comparison to a year ago, which had an extra day. Flower grew 32%, while pre-rolls surged 54%. Concentrates increased 21%, and ingestibles expanded by 11% compared to a year ago. 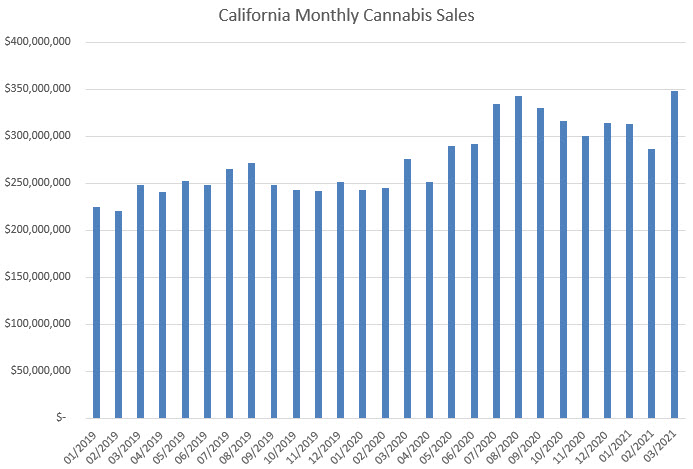 Sales increased 19% sequentially and 22% from a year ago to reach $199 million. Flower sales grew 16%, with pre-rolls gaining 42%. Concentrates expanded by 29% and ingestibles gained 28%. 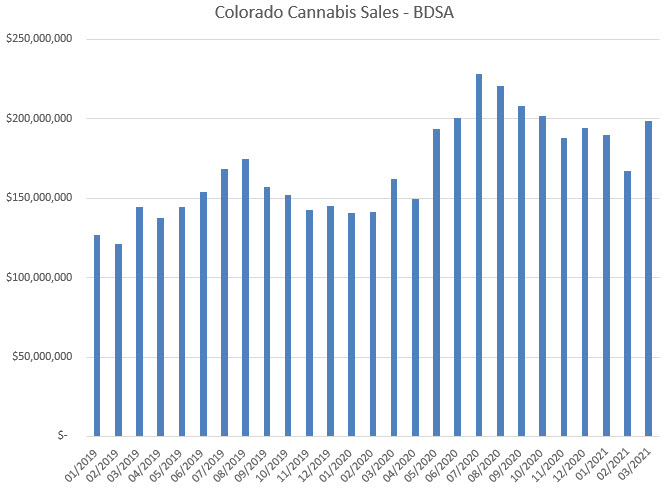 Nevada also posted record sales, with growth of 50% compared to a year ago, when tourists had abandoned Las Vegas. Sequentially, sales grew 21% to $84 million. Flower grew 56%, with pre-rolls gaining 20%. Concentrates grew 57%, and ingestibles expanded by 46%. 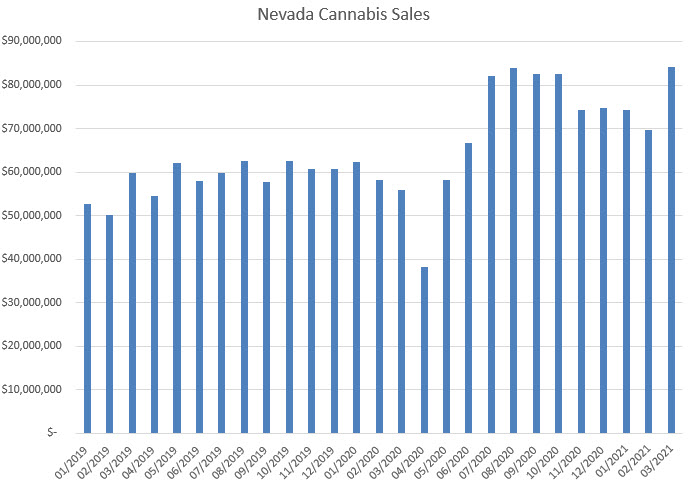 With sales reaching a record $109 million, year-over-year growth exceeded 29%, up 23% from February.  Flower grew 26%, with pre-rolls growing 52%. Concentrates expanded by 38%, and ingestibles increased 14%. 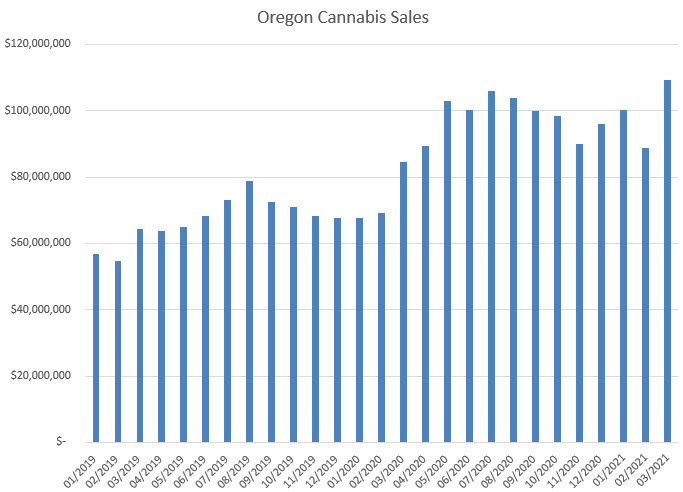 In the newer markets, the annual rate of growth picked up in two of the three markets after having declined during February in all three. Note that we wrote about March data for Illinois based on the state’s data a month ago. BDSA provides more comprehensive data than the state, breaking into product types. The state hasn’t yet released the medical sales, but April adult-use sales grew 5% sequentially and expanded 209% from a year ago. Note that BDSA has begun providing data for Florida and Michigan. 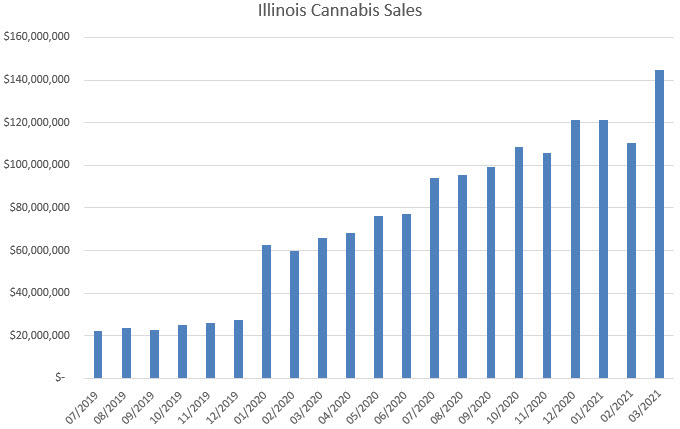 Maryland was the only state to see annual growth slow, with sales of $48 million, it’s highest month to date, expanding 17% sequentially and 43% compared to a year ago. In February, the state had seen sales grow by 50%. Flower grew 53%, while pre-rolls grew 30%. Concentrates increased 45%, and ingestibles grew by 49%. 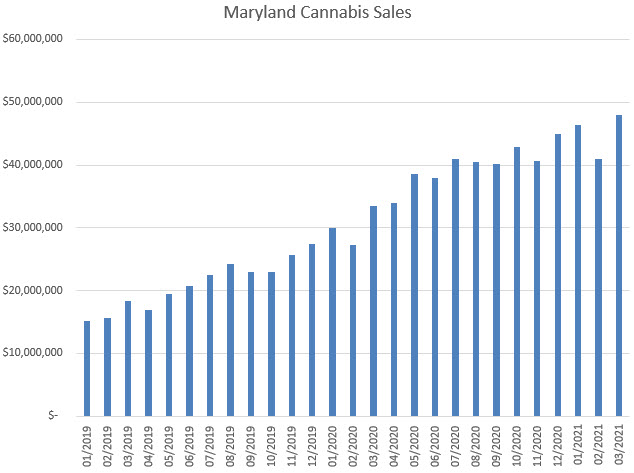 Sales soared to a record $124 million, up 24% sequentially and 92% from a year ago, a month in which adult-use sales were halted during the last week. flower grew 82%, while pre-rolls gained 121%. Concentrates expanded 88%, and ingestibles grew 104%. 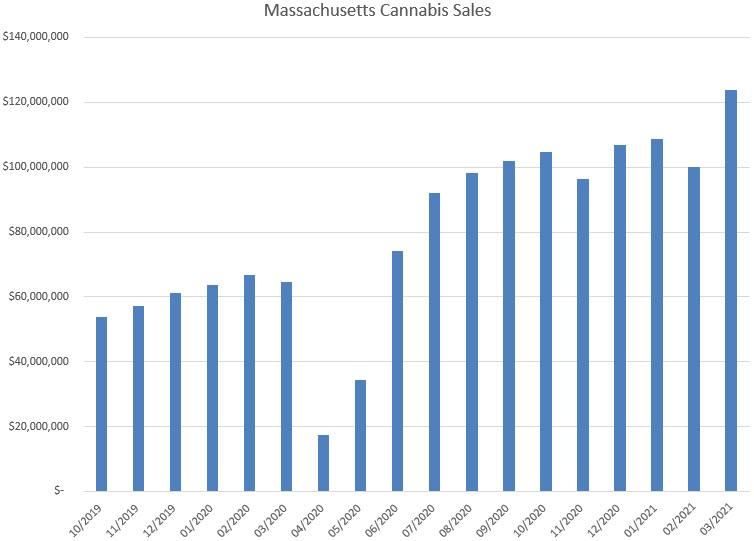