After a very sharp bounce in December from November, cannabis sales experienced large sequential declines in January across markets covered by cannabis data analytics firm BDSA. The year-over-year growth rates were generally weak, with ongoing pressure from declining flower sales. In this review, we will look at the markets one-by-one, beginning with the more mature western markets and then concluding with the newer eastern markets.

BDSA provides coverage for the relatively mature markets of Arizona, California, Colorado, Nevada and Oregon. In January, growth ranged from -21% in Nevada to 19% in Arizona compared to a year ago. 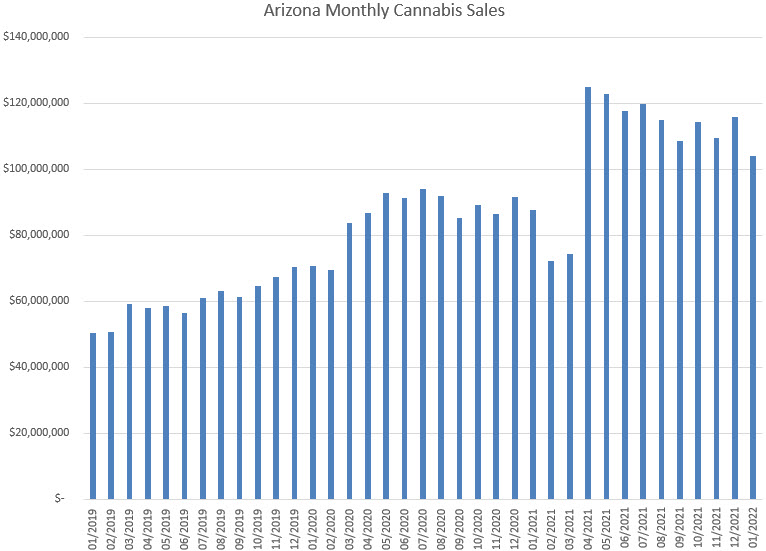 January sales of $275 million contracted by nearly 10% from December and by over 12% from a year ago in California. This was the lowest year-over-year growth since the program began. Flower sales fell by 23%, and concentrates declined by 9% compared to a year ago. Ingestibles fell by 5%, while pre-rolls expanded by 12%. 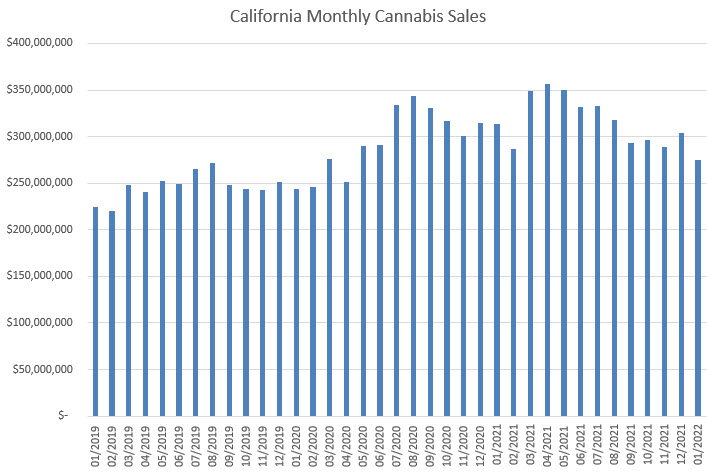 Cannabis sales dropped 4% from December in Colorado to $168 million, down 11% from a year ago. The decline was not as steep as the period from July through September. Flower sales fell nearly 18% from a year ago, with ingestibles, concentrates and pre-rolls all down about 6%. 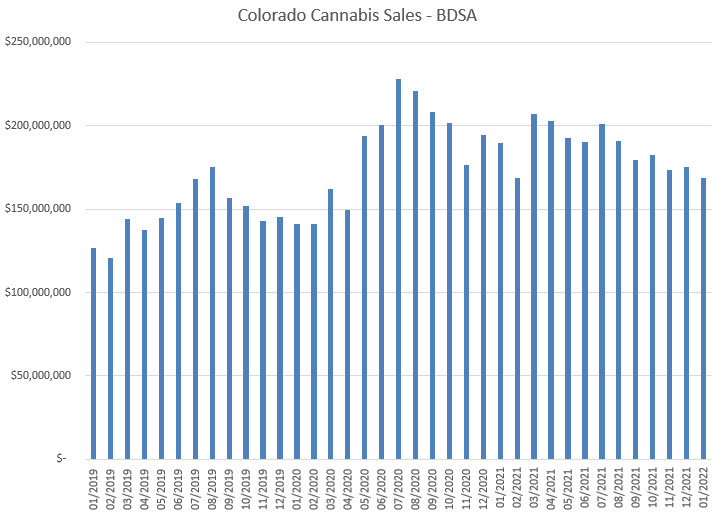 The Nevada market remains very weak due to the pandemic, with sales of $59 million declining 8% from December and 21% from a year ago. Flower fell by nearly 30%, with concentrates the strongest category at -8% compared to a year ago. 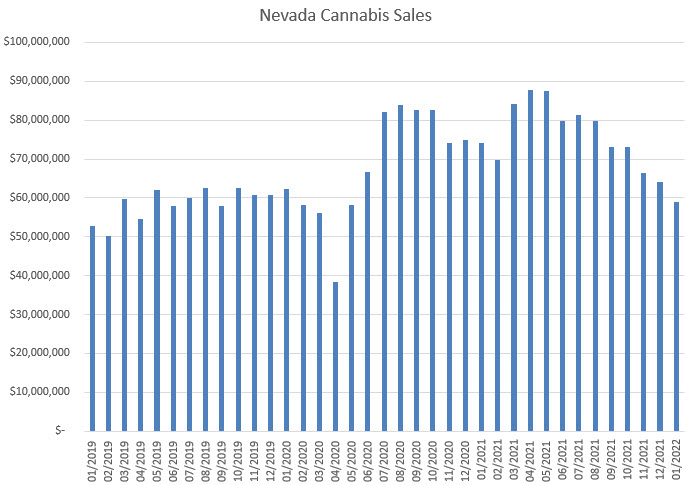 The 17% decline from a year ago to $88 million was the first double-digit decline that Oregon has experienced in recent years. Sequentially, sales fell 5%. Flower was down 26% from a year ago, with other categories down 3-10%.

In the newer markets, the annual rate of growth picked fell in the three markets for which BDSA has been providing data. Note that BDSA has begun providing data for Florida, Michigan and Pennsylvania as of January 2021, so the year-over-year growth was available for the first time this month. Florida sales fell 7% sequentially to $153 million, up 23% from a year ago. Pennsylvania fell 13% from December to $94 million. This represented just 6% growth from a year ago. Michigan, which we previously detailed, saw overall sales decrease 9% from December to $153 million, up 41% from a year ago. BDSA, which includes accessories, estimated sales for January at $151 million, down 10% sequentially. 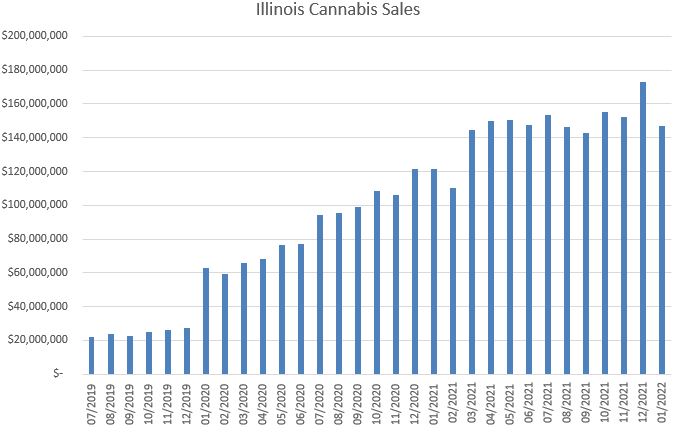 The Maryland medical cannabis market endured its first year-over-year decline, with sales of $44 million falling 5% from December and a year ago. Flower fell 6%. Ingestibles was the only category to experience growth, rising 5%. 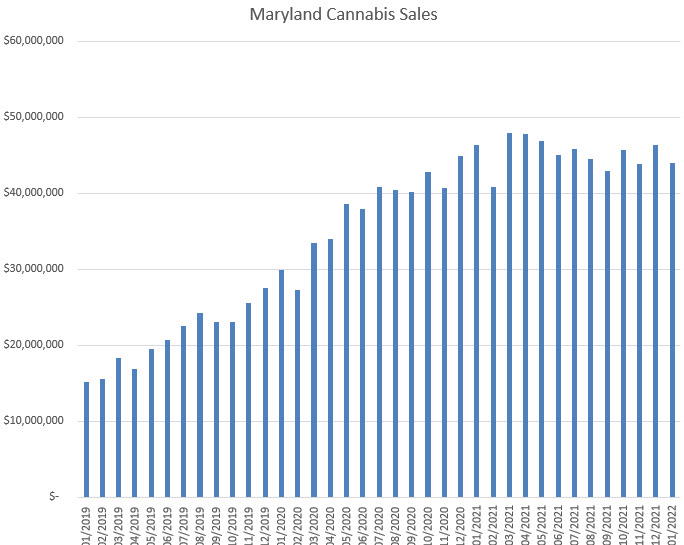 After setting a record in December, sales fell 14% to $136 million, 25% higher than a year ago. Flower increased only 12%, while ingestibles and pre-rolls grew in excess of 40%. Concentrates increased 28%. 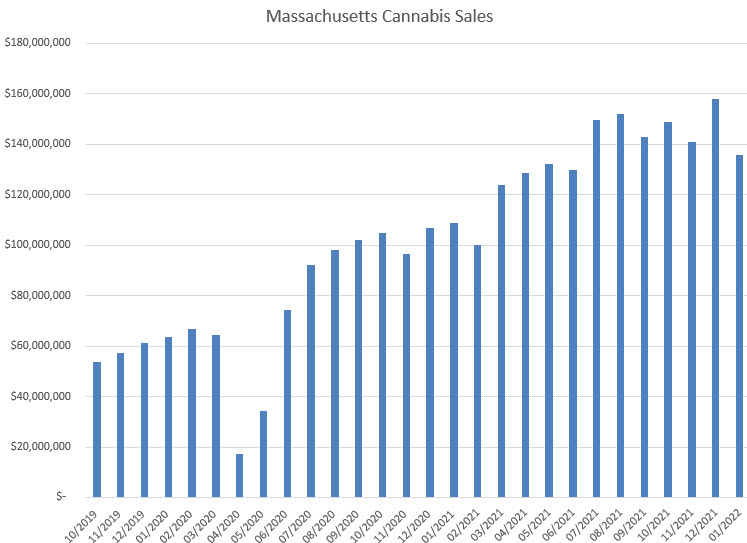