A Detailed Look at Cannabis Sales in California, Oregon, Arizona, Colorado and Nevada

During May, the ninth month after the onset of the vaping crisis and the third month of the pandemic impacting the market, sales across the five markets totaled $735.4 million, up 14% from April’s $644.9 million. March had spiked to $666.0 million from $579.9 million in February as customers purchased cannabis ahead of store closures and concerns about limitations on access. Overall sales growth from a year ago among the five Western markets ranged from-6% in Nevada to as high as 87% in Oregon. Arizona continued its strong growth, rising 58%, while Colorado accelerated to 32%. California saw solid growth, increasing 15%. Growth in concentrates, which represented 25-35% of sales by market, has continued to improve in recent months but remains below the 26-38% share of sales in August before the vaping crisis hit.

Here is a closer look at each market, as detailed by BDSA:

Flower sales accounted for nearly 49 percent of overall revenue for the month with $45.4 million in sales, growing six percent from April. Pre-rolled Joints, which are tracked as a separate category, accounted for just under four percent of revenue with $3.4 million in sales. Compared to the previous May, Flower sales increased by 64 percent and Pre-rolled Joints increased by 70 percent. 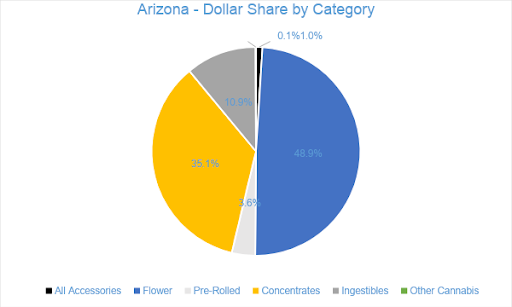 Concentrate sales accounted for about 35 percent of overall revenues with sales totaling $32.6 million in May, growing by eight percent from the trailing month. Vape products, the largest segment of the Concentrates category, generated $20.3 million in sales, accounting for 62 percent of the Arizona Concentrates market and 22 percent of sales across all categories. Compared to May 2019, sales of Dabbable Concentrates grew by 86 percent, while Vape sales grew by 42 percent.

The Ingestibles category accounted for 11 percent of sales in May with $10.1 million in revenue. Compared to May 2019 and April 2020, sales in the category grew by 48 and by seven percent, respectively. In May, the $9.4 million in sales from Edibles generated nearly 93 percent of Ingestibles sales overall, while Sublinguals made up the remaining seven percent. Compared to the previous May, Edibles sales increased by 62 percent and Sublingual sales decreased by 31 percent.

BDSA sales reporting for the month of May reflects the state market of 683 licensed dispensary locations and 201 delivery operators.

May, 2020 marked a high-point in sales for California’s regulated cannabis market, setting a new single-month record with $290.1 million in sales and representing 15 percent growth both from the trailing month and compared to May, 2019. Despite difficulties presented by the Covid-19 pandemic, both price and volume increased in line with consumer demand across nearly all product categories.

Year to date, sales in California have reached $1.3 billion, a ten percent increase compared to the same period in 2019.

Sales from Flower generated $115.4 million in May 2020, accounting for nearly 40 percent of overall revenues. Compared to the trailing month and May 2019, Flower sales grew by 18 percent and 38 percent, respectively. Pre-rolled Joints, which are tracked as a separate category, accounted for more nearly ten percent of overall May revenues with $28.4 million in sales. Sales of pre-rolled joints increased 27 percent compared to May 2019.

Concentrates were the second-largest revenue category in May 2020, reaching $87.8 million in sales and accounting for over 30 percent of total revenue. Compared to the trailing month and May 2019, sales increased by 12 percent and declined three percent, respectively. The $67.2 million in Vape sales accounted for 77 percent of the Concentrates category and 23 percent of the month’s overall sales revenue.

May 2020 was a milestone for Colorado’s regulated cannabis market. The $191.1 million in reported sales represent 28 percent growth from the trailing month and eclipsed sales from the prior May by 32 percent. The previous record month for Colorado was August 2019 with sales reaching $175.5 million. Year-to-date through May, combined channel sales have reached $785.5 million, increasing by 16 percent from the same period last year.

Sales growth in May benefitted nearly all major product categories with both volume and price increases, indicating higher demand. Exceptions were observed across the Concentrate and Vape categories in the medical channel as dispensaries offered bigger discounts to medical patients.

The $55.6 million in Concentrate sales during May 2020 represented a 15 percent increase from the previous year and 26 percent growth from the trailing month. The category accounted for 29 percent of revenue for the month. Vape products, the largest segment within the Concentrates category, reached $24.9 million in May sales, increasing 33 percent compared to April. The Vape category accounted almost 45 percent of Concentrates’ revenue and 13 percent of overall sales for the month.

In May 2020, sales from Ingestibles generated $26 million, a 15 percent increase from May 2019. Compared to the trailing month, sales in the category grew by more than 30 percent. Edibles generated $24.5 million in monthly sales revenue, contributing over 94 percent to the Ingestibles category and 13 percent of total revenue for the month. Sublinguals made up the remaining six percent of Ingestibles sales, totaling at $1.5 million for the month.

On May 9th 2020, Nevada dispensaries were permitted to resume in-store sales, though curbside pickup and delivery continued to be available and encouraged. The reopening of in-store sales resulted in a significant uptick in commerce as combined sales for both adult-use and medical dispensaries reached $58.2 million, growing by 52 percent from the trailing month. Sales remain six percent lower compared to May 2019. In addition to the reopening of in-store transactions, lower product pricing also contributed to the strong sales month. Year-to-date through May, sales in the market have reached $273.2 million, declining two percent compared to the same period last year.

Flower sales accounted for nearly 52 percent of overall May 2020 sales. Sales in the category reached $30.1 million for the month, growing 54 percent from April. Pre-rolled Joints, tracked separately from Flower, accounted for more than nine percent of May sales with $5.5 million in revenue. Compared to May 2019, Flower and Pre-rolled Joints sales have increased by 19 percent and decreased by 38 percent, respectively.

Concentrate sales in May reached $14.3 million, accounting for about 25 percent of overall revenue for the month. Compared to the previous May, category sales declined by ten percent. Compared to the trailing month, category sales grew by 56 percent. Vape products, the largest segment in the Concentrates category, generated $10.6 million for the month, contributing nearly 74 percent to Concentrates revenue and 18 percent to total monthly sales. In May, vape sales were 17 percent lower than in May of the previous year.

After years of setbacks, Oregon’s regulated cannabis market has achieved a steady, successful pace. Over the past nine months, Oregon dispensary sales have experienced consistent, double-digit year-over-year growth. The upward trajectory reached an all-time high this past May, despite the presence of the Covid-19 pandemic, with sales setting a new single month record for the state.

Sales of Flower generated $49.4 million in May 2020, accounting for 48 percent of overall revenues. Compared to the trailing month, Flower sales increased by 16 percent. Compared to May 2019, sales jumped by 121 percent. Pre-rolled Joints, which are tracked as a separate category, accounted for eight percent of overall revenues with $8.4 million in sales.

For readers looking for a deeper look at cannabis markets across these five states and more, including segmentation by additional product categories, brand and item detail, longer history, and segmentation by product attributes, learn how the BDSA GreenEdge Platform can provide you with unlimited access to the most accurate and actionable data and analysis.