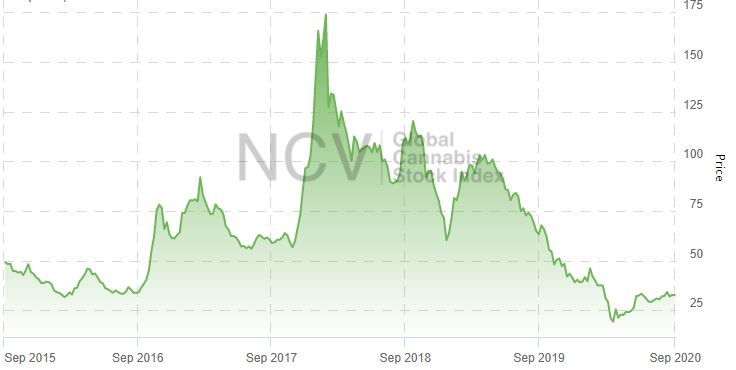 The strongest 4 names in August increased by at least 19%:

GrowGeneration, which sold $48 million of stock in a public offering at $5.60 in late June, soared to an all-time high of$22.88 before closing the month at $15.955. The company beat analyst forecasts for Q2 and provided strong guidance for the balance of the year and 2022. The stock, which trade over $1 billion in value on its most active day, nearly its market cap, was aided by two analyst initiations during the month and an appearance on Jim Cramer’s Mad Money. The weakness late in the month was spurred by a short-report from Hindenburg Research as well as disclosure of large sales of stock by insiders. GrowGen is up 293% in 2020. Trulieve also beat analyst forecasts and upped guidance, pushing the stock to close up 93% year-to-date. Rumors of a potential merger with another leading MSO appear to have boosted the stock as well.

Planet 13, one of the strongest performers in July, tacked on additional gains during August and is up 79% this year thus far. The company reported its Q2 financials after the close on August 31st . Planet 13 has been impacted by the reduction in Las Vegas tourism, but it has quickly adapted its business to serve locals. The company priced its second recent equity offering in late August. Cresco Labs, also one of the top performers in July, reported a stronger-than-expected Q2 in terms of revenue and adjusted EBITDA, supported by continued strength in Pennsylvania and Illinois, where it has been opening additional dispensaries. The company reported sequential growth in excess of 30% in all of its markets except Massachusetts, which was impacted by mandated closure for adult-use sales. Cresco is down 1% year-to-date.

The 4 weakest names fell by more than 21% in August:

Sundial moved to an all-time low following an aggressive equity offering and a public disclosure that it is seeking strategic alternatives. Its stock is down 89% in 2020. 22nd Century Group, which is down 46% year-to-date, is more leveraged to tobacco than cannabis, where it is focused on technologies to alter cannabinoid levels. cbdMD, one of last month’s strongest performers, gave up gains despite a strong financial report for its fiscal Q3. The stock is up 9% year-to-date. Power REIT also seemed to be suffering from profit-taking, as it remains up 126% this year.