Cannabis stocks recovered nearly all of the losses from June during July, with the Global Cannabis Stock Index increasing 9.0% to 32.07: 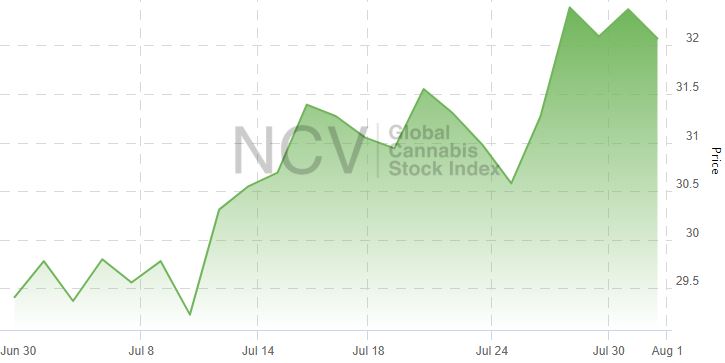 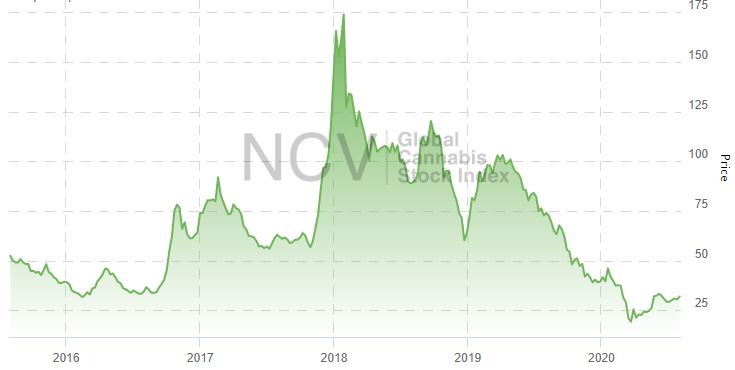 The strongest 4 names in July increased by at least 38%:

Planet 13 and cbdMD were the two best performers in June as well, with both moving well into the green year-to-date during July. Planet 13 has gained more than 43% in 2020. During July, it extended its self-manufactured production and also announced a deal to acquire an additional cultivation and production facility in Las Vegas. cbdMD is up 46% in 2020, and there was little material news during July, when it substantially outperformed other CBD marketers. Curaleaf, which is up almost 34% this year, closed the Grassroots Cannabis acquisition during the month and also completed an upsized private placement of its stock. Cresco Labs, which has outperformed the index in 2020 but is still down 17%, opened its largest retail store to date in Illinois, located close to the Wisconsin border in South Beloit.

The 4 weakest names fell by more than 21% in July:

Mydecine, which was previously New Age Farm, then New Age Brands and, most recently, NewLeaf Brands, ran up prior to July, when it qualified to join the index after pivoting into psychedelics. The company, which has maintained its CBD business, generated only C$4575 in revenue in Q1, ending the quarter with a cash balance of less than C$8K. Sundial Growers, like several of the larger LPs, was under pressure during the month, but it provided no news updates. In June, it sold a non-cannabis asset and restructured its credit agreements. Sundial has dropped more than 80% in 2020 and more than 95% since its $13 IPO a year ago. Akerna had performed well in the first half of the year but sold off sharply in July. Early in the month, it replaced its CTO. It also closed the acquisition of Ample Organics and exercised its option to acquire the balance of solo sciences. The stock, while down 22.5% in 2020, has slightly outperformed the index. Organigram’s fiscal Q3 report disappointed investors as revenue slipped and the company wrote down inventory and the value of some of its production facility. The stock is down nearly 50% in 2020.