Our medical cannabis sales increased dramatically during the quarter, with increasing contribution from oils. We are pleased that our GMP manufacturing process, which includes extensive quality controls, as well as the fact that our process does not involve pesticides, is increasingly being recognized by patients and healthcare professionals. 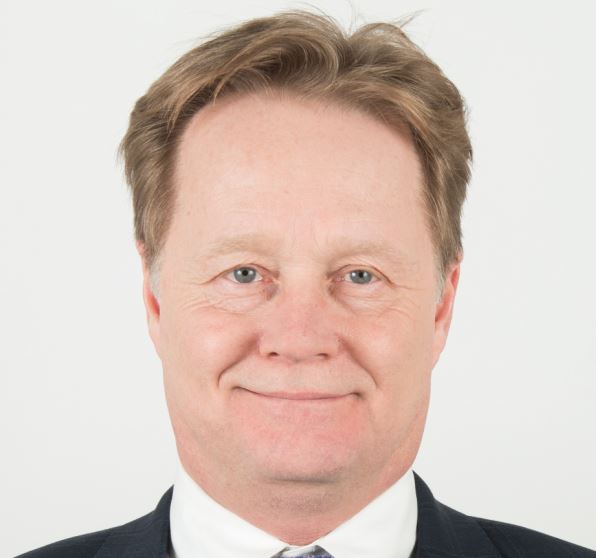 Brent Zettl, President and CEO of the Company

We continue to pursue new market channels, including distribution domestically through pharmacies and internationally through collaborations with foreign healthcare companies.

For the three months ended January 31, 2017, sales and marketing expense of $0.8 million was relatively unchanged period over period.

For the three months ended January 31, 2017, loss on derivative instruments was $2.4 million (Q1 2016 – $nil). The increase is attributable to increased value attributed to the embedded derivative liability relating to a conversion to equity option contained within the convertible debentures. During the quarter, $11.3 million of convertible debentures (principal balance) were converted to equity. This option expired at the end of the first quarter of 2017.

The agreement includes the licensing of six patents related to cannabinoid and opioid delivery for pain management. In addition to specified initial payments, the Company will pay a royalty of 5% of gross sales of products using the licensed delivery technology.

Letter of Intent with PharmaChoice

On March 2, 2017, the Company signed a letter of intent with PharmaChoice, a member-owned cooperative that represents more than 700 independent pharmacy owners across Canada, to collaborate on pharmacist education and the distribution, sale and marketing of medical cannabis products. The parties intend that CanniMed will be responsible for producing and delivering accredited pharmacy education programs to PharmaChoice pharmacists and pharmacy technicians across Canada.

In addition, CanniMed and PharmaChoice intend to enter a definitive agreement for distribution of medical cannabis through PharmaChoice pharmacists in Canada upon completion of the first provincial legislation change that allows such distribution.

The Company is discussing similar agreements pertaining to both education and distribution with other pharmacy chains. The PharmaChoice model is a useful model for these ongoing discussions.

Corporate Financing Activities During the Quarter

On December 29, 2016, CanniMed completed an initial public offering (“IPO”) and on January 30, 2017 the underwriters’ overallotment option (“OAO”) was exercised, resulting in total gross proceeds of $69.0 million to the Company. A total of 5,750,000 common shares of CanniMed were issued at $12.00 per share, pursuant to the IPO and the exercise of the OAO. Common shares of CanniMed began trading on the Toronto Stock Exchange on December 29, 2016 under the ticker symbol CMED.

During December 2016 and January 2017, the holders of a total of $11.3 million of convertible debentures (principal balance) exercised their conversion rights, resulting in the issuance of 2,057,060 common shares of CanniMed. Due to non-conversion, $0.2 million of debentures remain with a term of five years and interest rate of 12 percent.

The Company utilizes non-IFRS financial measures as supplemental indicators of operating performance and financial position. These non-IFRS financial measures are used internally by the Company for comparing actual results from one period to another. The Company believes that, in addition to conventional measures prepared in accordance with IFRS, certain investors use this information to evaluate the Company’s performance and ability to generate cash flow. Accordingly, such information is intended to provide additional information and should not be considered in isolation or as a substitute for measures of performance prepared in accordance with IFRS.

The Company uses EBITDA and Adjusted EBITDA as a supplemental financial measure of its operational performance. Management believes EBITDA to be an important measure of its capacity to generate cash flow from operations as it excludes the effects of items which primarily reflect the impact of long-term investment and decisions and finance strategies, rather than the performance of the Company’s day-to-day operations. The Company measures EBITDA as net earnings (loss) from continuing operations plus income taxes expense (recovery), interest expense and depreciation and amortization. Adjusted EBITDA removes non-cash expenses such as loss on derivative instruments, share-based compensation and non-cash expenses within cost of sales. 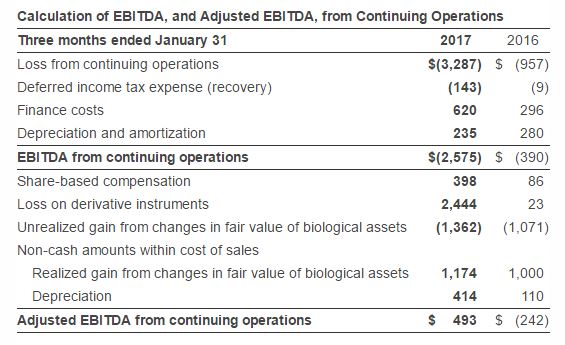 CanniMed Ltd., through its subsidiaries, was the first producer to be licensed under the Marihuana for Medical Purposes Regulations, the predecessor to the current Access to Cannabis for Medical Purposes Regulations. It was the sole supplier to Health Canada under the former medical marijuana system for 13 years, and has been producing safe and consistent medical marijuana for thousands of Canadian patients, with no incident of product diversion or recalls.

1 Adjusted EBITDA is a non-IFRS measure with no standard definition under IFRS. See the “Non-IFRS financial performance measures and reconciliations” section of this news release and in the Company’s MD&A.

Editor’s note: We have amended this press release to incorporate information in a follow-up press release issued by the company to reflect an error in the selling price, originally reported at $10.81 per gram: http://www.businesswire.com/news/home/20170317005329/en/CanniMed-Therapeutics-Corrects-Previously-Released-Q1-Average