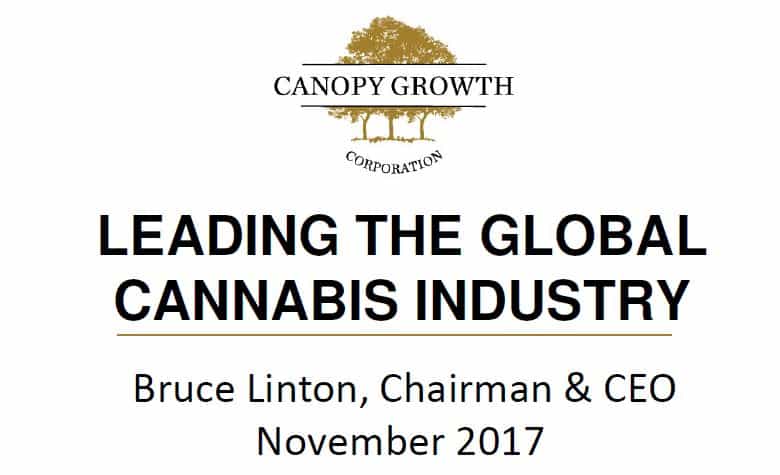 New Cannabis Ventures hosted a webinar with Canopy Growth (TSX: WEED) (OTC: TWMJF) CEO Bruce Linton, who discussed the company’s global cannabis platform, its branding strategy, the evolution of its core products, his outlook on legalization in Canada and Canopy’s domestic expansion and his view of cannabis as an ingredient. He also elaborated on the recent strategic investment from Constellation Brands (NYSE: STZ), which he viewed as less about the capital raised than the cultural fit and opportunities of the partnership. Readers can download the slides from Linton’s presentation.

During the Q&A, Linton addressed a number of questions, including several on distribution, international opportunities, capital raising and challenges for the sector despite federal legality for medicinal purposes in Canada and how shareholders benefit from Canopy Health and Canopy Rivers. One of the most interesting points he made is that he believes that just as it has become important to have a physical presence across the provinces in Canada, he expects that the export market will not be significant. Rather, companies will need to invest in local production globally.  Linton also alluded to possibly more strategic deals ahead in the pharmaceutical and tobacco industries.

To contact the company for more information, fill out the contact form on Canopy’s investor dashboard at New Cannabis Ventures or email invest@canopygrowth.com.