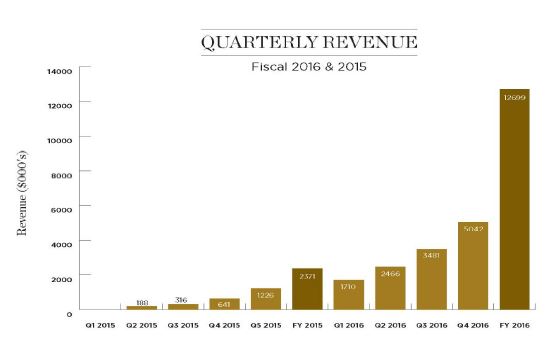 Fiscal 2016 was another year of dramatic change and growth in our business.

Added Linton “With the prospect of a legal recreational marijuana market in Canada on the horizon and many exciting international business opportunities, we are committed to building on our strong start. We will continue to make prudent investments in our business to increase our market share, diversify our product offering, grow our production capacity in Canada, vertically integrate up the value chain of permissible products and drive international growth.” 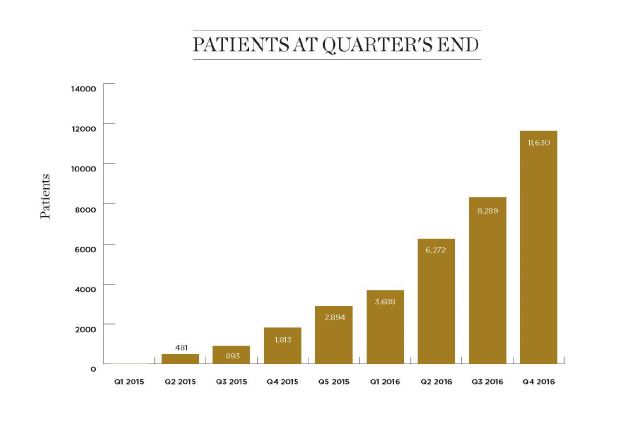 Approximately 1,700 kilograms and kilogram equivalents were sold in the fiscal year ended March 31, 2016, representing a greater than 400% increase over the prior fiscal year. 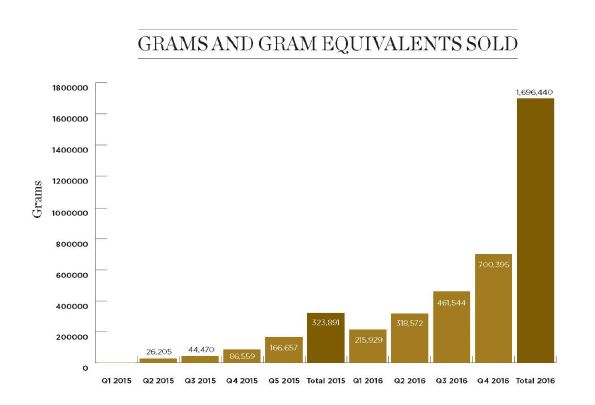 The gross margin, including the unrealized gain on changes in fair value of biological assets, in accordance with IFRS, was $2.7 million, or 53% of sales, for the three-month period ended March 31, 2016. In the comparison period last year, the gross margin on the same basis was $2.4 million or 197% of sales.

The increase in sales and marketing expenses in the three and twelve month periods ending March 31, 2016 over the comparison periods was invested in refreshing Bedrocan Canada post-acquisition, launching Tweed’s customer engagement locations and continuing to position the Tweed brand in preparation for a non-medical market.

General and Administrative (“G&A”) expenses were $2.6 million in the three-month period ended March 31, 2016 compared to $1.5 million in the same period last year.

The increase in G&A expenses over the comparison periods last year reflects the Company’s growth from the early start-up of last year, building commercial capacity and capability as a public company and meeting compliance requirements with Health Canada.

At March 31, 2016, the Company’s cash, comprised of cash and cash equivalents totalled $15.4 million, representing a decrease of $9.0 million from March 31, 2015. The decrease is attributable to $12.4 million used to fund operations, investments in facility enhancements totalling $13.1 million, and $2.1 million used to repay a loan, partially offset by net proceeds from financings, including the “bought deal” common share offering in the third quarter of fiscal year 2016 and the exercise of warrants and options, together totalling $20.6 million. Investments in facility enhancements include the build out of our Tweed Farms facility and improvements at our Tweed facility, in part required for the production of cannabis oil extracts and refinements to production processes.

On April 15, 2016, the Company announced that it had closed its previously announced short-form prospectus offering, on a bought deal basis, including the exercise in full of the underwriters’ over-allotment option. A total of 5,002,500 common shares in the capital of the Company were sold at a price of $2.30 per share, for aggregate gross proceeds of $11,505,750 (the “Offering”). The Offering was underwritten by a syndicate of underwriters led by Dundee Securities Ltd and including GMP Securities L.P.

Canopy Growth announced a partnership with AusCann Group Holdings Ltd. (“AusCann”), an early leader in the nascent Australian medical cannabis industry, in which Canopy Growth will offer the expertise of Tweed and Tweed Farms in a number of areas including production, quality assurance and operations, and provide strategic advisory services to AusCann in exchange for an initial 15% ownership stake in AusCann, as well as future options. AusCann and Canopy Growth will also aim to work together in Australian and international markets in a preferential but non-exclusive arrangement.

On June 8, 2016, the Company announced it had received conditional approval from the Toronto Stock Exchange (TSX) to list its common shares once it had satisfied certain conditions. Canopy Growth will be the first cannabis producer to list on Canada’s most prestigious securities exchange. CGC expects to meet all conditions of approval and commence trading on the TSX in the second quarter of fiscal year 2017, the three-month period ending September 30, 2016.

Canopy Growth will host a conference call and audio webcast with Bruce Linton, CEO and Tim Saunders, CFO at 8:30 AM Eastern Time, June 27, 2016. 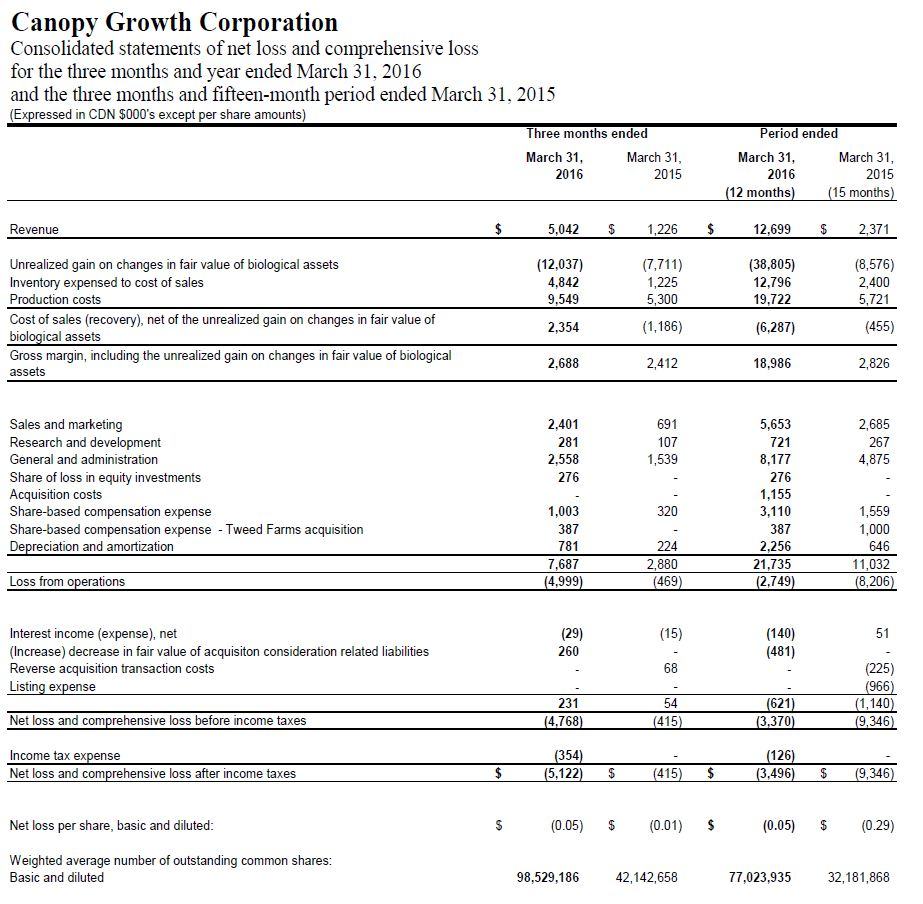 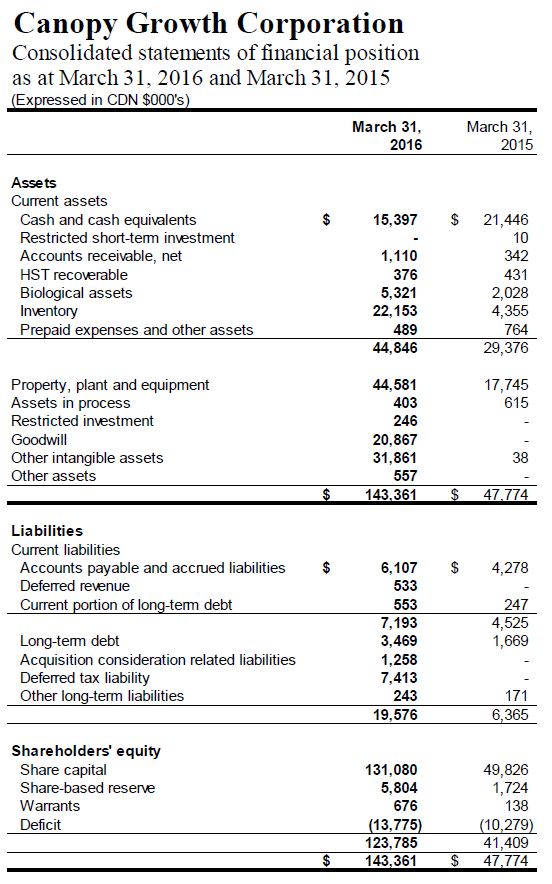 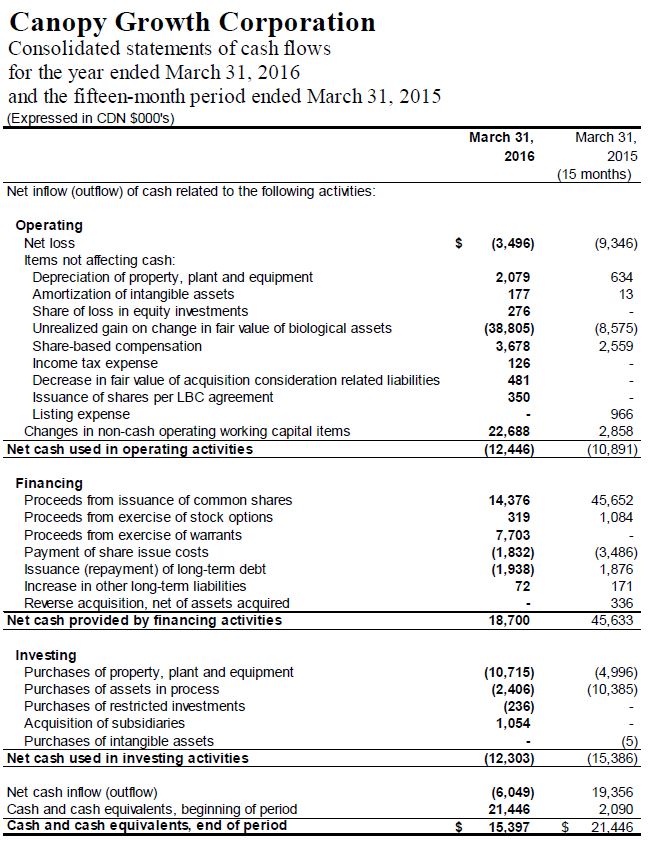 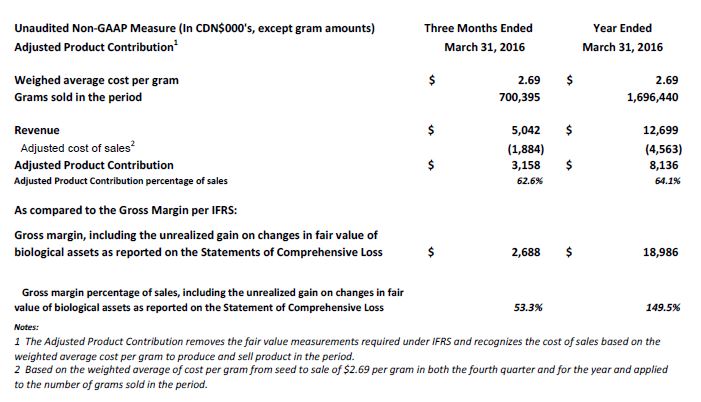