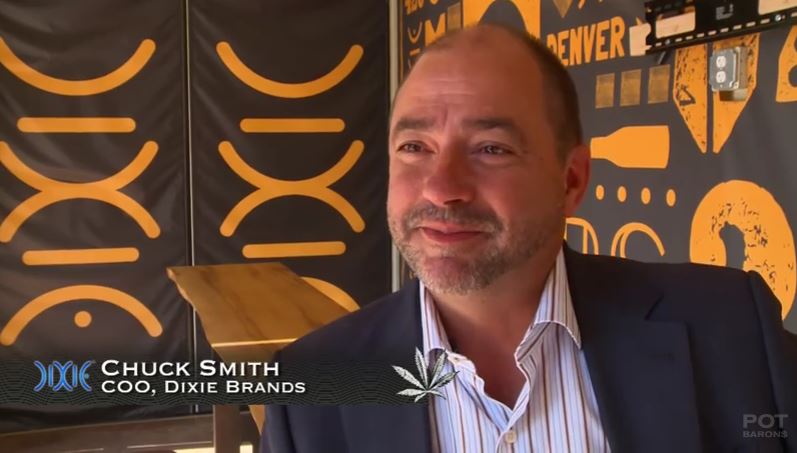 Seth Adler, who has been conducting extensive interviews with the leaders of the cannabis industry for over a year now on his Cannabis Economy podcasts, recently shared his dialogue with Chuck Smith, the COO of Dixie Brands. Almost everyone knows his equal partner, Tripp Keber, who serves as CEO and who Smith describes as the “front of the house” and “rainmaker”, but most are not that familiar with Smith, who has stayed out of the limelight (with the exception of his appearance on Pot Barons).

A great part of the interview involves Smith’s background growing up in Baltimore, his attendance at University of Maryland, where he migrated from his interest in becoming a veterinarian to his degree in accounting followed by an immediate journey to Nashville to get his MBA from Vanderbilt. Smith’s first job out of college was acting as CFO of a small women’s clothing retailer in Chicago, which he eventually ran before selling it. He then worked for a software company and migrated towards real estate.

Smith partnered with Keber in a real estate company prior to their involvement with Dixie, introduced by his friend and partner who unilaterally brought in Keber to help them with business development. Keber and Smith ended up buying the controlling partner out and have been “50/50 partners” in all business since then. Smith discussed how his own views as Dixie have evolved, as he originally thought it would be a quick exit. He enjoys the social mission of the company to end prohibition and help address medical issues as well as creating products to replace alcohol consumption. Smith spends a lot of his time working with state regulators to improve laws and speaks eloquently about not making programs too restrictive, as patients suffer fewer choices and end up turning to the black market.

By the end of June, Dixie will be in six states, all in the West, including Colorado, Arizona, California, Oregon, Nevada and Washington. He said that over the next few months, the company will be planning its East Coast strategy.  He ruled out New York due to the restrictive nature of the program, but he spoke about the potential of Florida despite its limitations on THC concentrations. He didn’t name any states, but the company’s best prospects are some of the smaller states with more liberal programs. Dixie is also moving forward with CBD products in Australia through its JV, and it hopes to see continued progress there.

Listen to the interview