Conference Call with Investors and Analysts to be Held on December 17, 2018

CHICAGO–(BUSINESS WIRE)–Cresco Labs, Inc. (CSE:CL) (“Cresco” or “the Company”) one of the largest vertically integrated multistate cannabis operators in the United States, today released its financial results for the third quarter and nine months ended September 30, 2018. All financial information presented in this release is in U.S. dollars, unless otherwise noted.

Subsequent to the end of third quarter 2018, the Company completed a business combination with Randsburg International Gold Corp. upon which its subordinate voting shares were approved for listing on the Canadian Securities Exchange (“CSE”) under the symbol “CL.” Cresco’s shares began trading on the CSE on Monday, December 3, 2018. The Company is in the process of receiving approval by FINRA to list on the OTC market in the U.S. and is currently trading under the symbol “CRLBF.” Concurrent with its public listing on the CSE, Cresco launched its new investors website at investors.crescolabs.com.

1 Revenue presented in the text herein is calculated net of excise taxes.
2 Pro forma revenue and adjusted EBITDA information reflect consolidated results of less than majority owned affiliates.
3 See “Non-IFRS Financial Measures” at the end of this press release for more information regarding Cresco Labs’ use of non-IFRS financial measures.

“As one of the early cannabis companies to establish a national geographic footprint with substantial population reach and production capacity, Cresco is leading the way in normalizing and professionalizing our industry,” said Charles Bachtell, Co-founder and CEO of Cresco Labs. “As a multi-state operator (“MSO”), we have repeatedly proven our ability to get access to markets, get operational, get product to markets, and get disproportionate market share. Early on in our formation, we realized that cannabis is a natural fit within consumer-packaged goods (“CPG”) – an industry that requires consistency, reliability and availability. We therefore developed a unique and sophisticated ‘house of brands’ that addresses each major market segment and covers all price points. In essence, we developed a disciplined business blueprint that enables our rapid entry into regulated markets, where operator obligations are stringent, where our products can be accessible to customers, and where we can capture leading market share right from the start.

Through our differentiated business approach, we have already proven that our capital starts working immediately to the benefit of our shareholders, regulators, legislators and consumers.

Now, with increased access to the capital markets through our public listing, we can take our expansion strategy to the next level. We believe that Cresco has built the foundation needed to generate strong growth and attractive shareholder returns in the years ahead.

As of September 30, 2018, the Company had total assets of $149.5 million, including cash and cash equivalents of $93.9 million, which does not reflect the full amount of proceeds from financing activities completed subsequent to the end of the quarter. Long-term liabilities totaled $2.0 million. At September 30, 2018, the Company had a working capital position of $105.3 million.

Subsequent to the end of the third quarter of 2018, the Company increased its liquidity through additional capital raises:

A core principle of the Company is to build a team of subject matter experts to propel Cresco’s growth in every vertical of the business. Recent hires include:

In addition to the above key hires, Cresco has recruited experts across every industry from companies including Stericycle, Abbvie, Abbott, Cushman & Wakefield, Pandora and BMO Financial Group.

The Company will hold a conference call and webcast to discuss its business and financial results next Monday, December 17, 2018 at 5 p.m. Eastern Time (4 p.m. Central Time). The conference call may be accessed via Cresco Labs’ investors website at investors.crescolabs.com or by dialing 866-688-4235 (409-216-0711 for international callers) and entering conference ID 5047018. Archived access to the webcast will be available for one year on Cresco’s investors website.

The Company’s unaudited consolidated interim financial statements and accompanying notes for the third quarter 2018 are available under the Company’s profile on SEDAR at www.sedar.com and on Cresco’s investors website at investors.crescolabs.com.

Cresco Labs, based in Chicago, is a leading U.S. cannabis company with experienced management, access to capital and a demonstrated growth strategy. As a differentiated grower, processor and retailer of premium cannabis operating in seven states, the company focuses on entering highly regulated markets with outsized demand potential and high barriers to entry. Its impressive speed-to-market gives Cresco a distinct competitive advantage as it replicates its model to expand its national footprint. Cresco’s proven ability to execute is complemented by a cutting-edge brand strategy spearheaded by several of the brightest minds in consumer marketing in the nation. Cresco’s products are tailored to all major consumer segments: everyday cannabis, medicinally focused, connoisseur grade, and chef inspired edibles by James Beard Award-winning pastry chef Mindy Segal. Learn more about Cresco Labs at crescolabs.com. 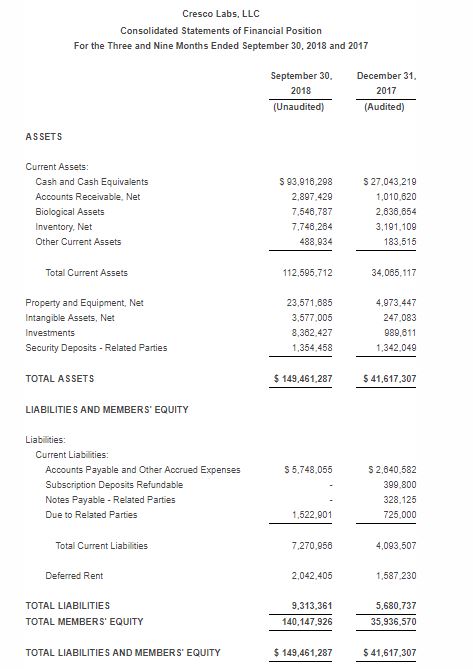 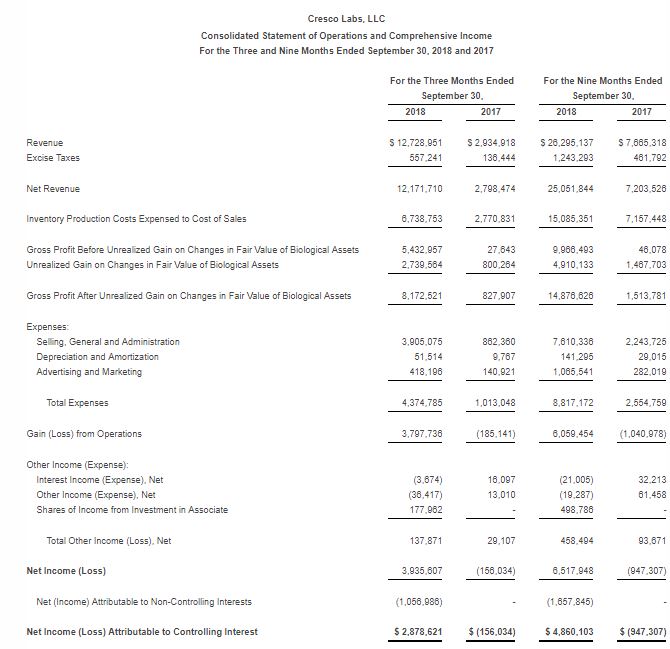 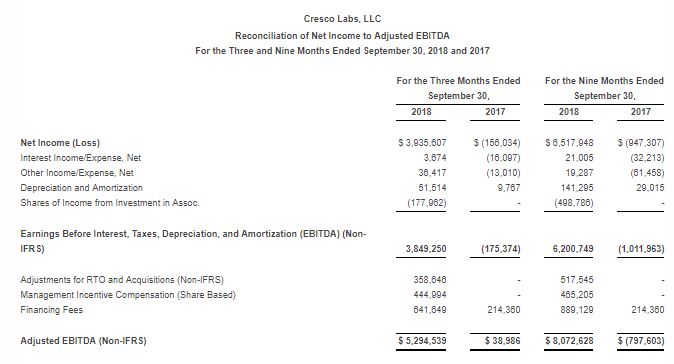 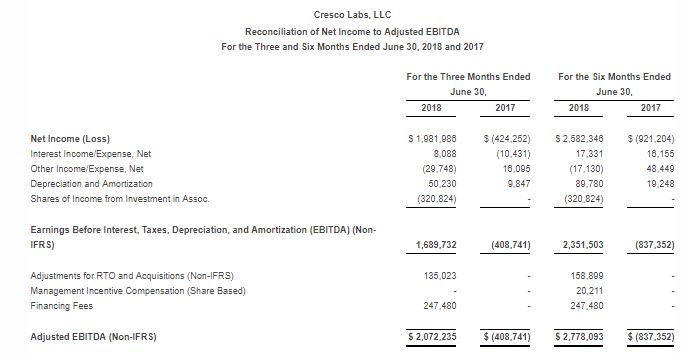 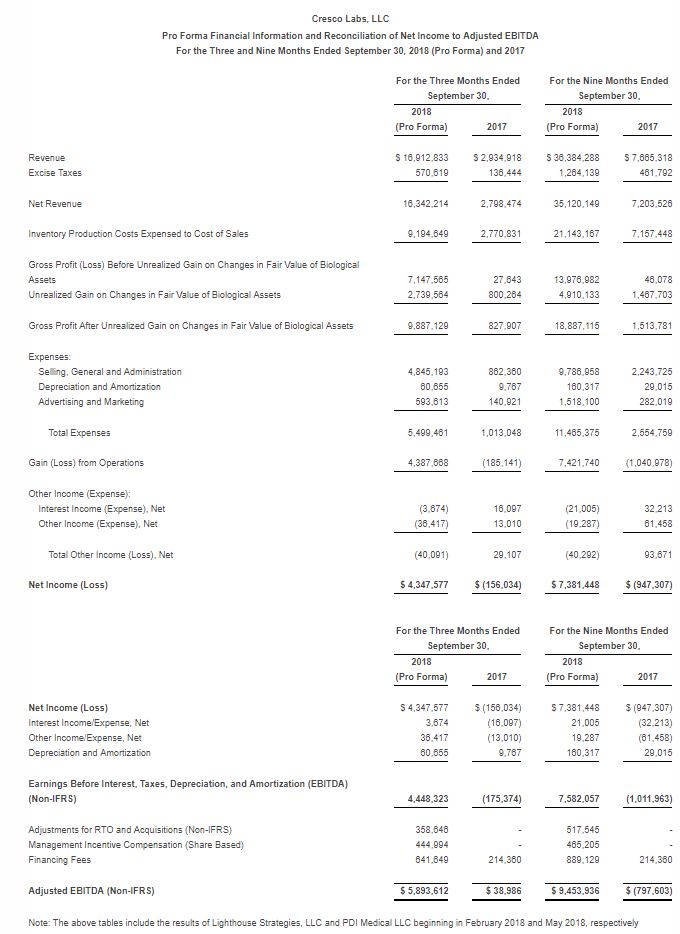 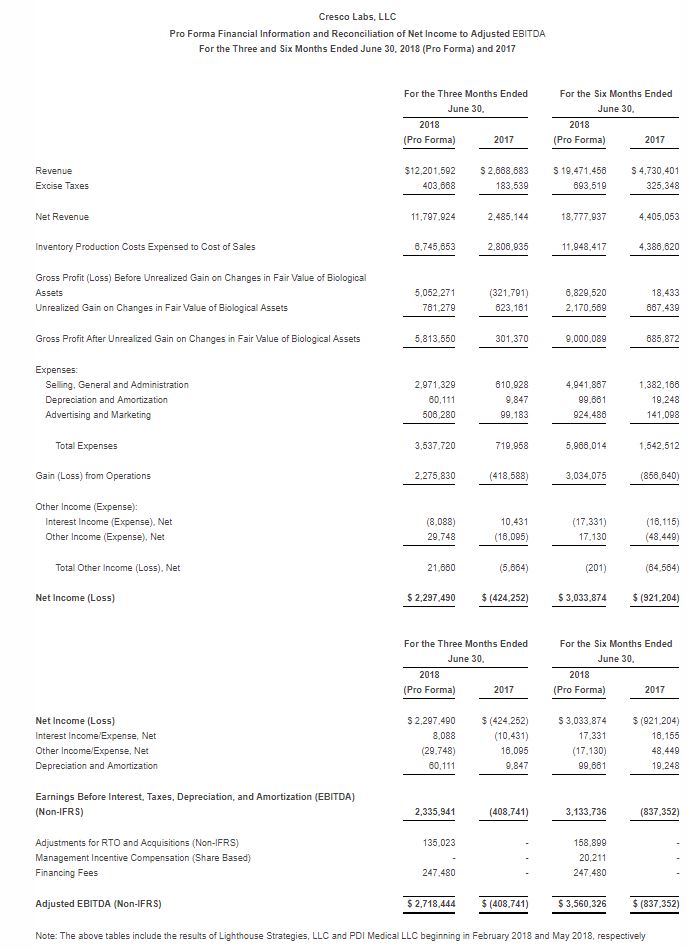