Confirming reports from unnamed sources published last night, Chuck Rosenberg, the Acting Administrator of the Drug Enforcement Agency (DEA), issued a harshly worded 186-page rejection of a request by former Governors Lincoln Chafee of Rhode Island and Christine Gregoire of Washington in 2011 to reschedule cannabis, suggesting no substantial evidence that cannabis should be removed from Schedule I. The rejection actually took place in July, slightly later than the DEA had indicated earlier this year. Much of the rejection was input from the Food and Drug Administration (FDA).

SUMMARY: By letter dated July 19, 2016 the Drug Enforcement Administration (DEA) denied a petition to initiate rulemaking proceedings to reschedule marijuana. Because the DEA believes that this matter is of particular interest to members of the public, the agency is publishing below the letter sent to the petitioner which denied the petition, along with the supporting documentation that was attached to the letter.

Click to view: DEA Denial of Petition to Initiate Proceedings to Reschedule Marijuana

In addition to the decision on rescheduling,  USDA, DEA, DOJ; FDA and HHS jointly issued a “Statement of Principles on Industrial Hemp”, clarifying that Section 7606 of the Farm Act of 2014 that permits pilot programs for the growth of domestic hemp continues to restrict hemp-related activities.

The principles state that industrial hemp may be grown only in accordance with a pilot program, that States must provide registration and certification, production is limited to research, industrial hemp includes Cannabis Sativa L (THC limited to no more than 0.3% of dry weight), products can be sold only in-state (and no plants or seeds transported across state lines) and several others.  While there has been no enforcement action taken yet, these principles appear to represent a big threat to the activities of several companies that have been citing the Farm Act of 2014 as permitting commercial activities.

SUMMARY: The U.S. Department of Agriculture, in consultation with the U.S. Drug Enforcement Administration and the U.S. Food and Drug Administration, has developed a Statement of Principles on Industrial Hemp to inform the public how Federal law applies to activities associated with industrial hemp that is grown and cultivated in accordance with Section 7606 of the Agricultural Act of 2014. 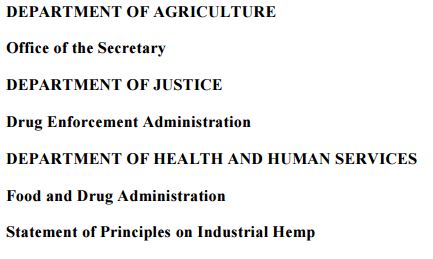