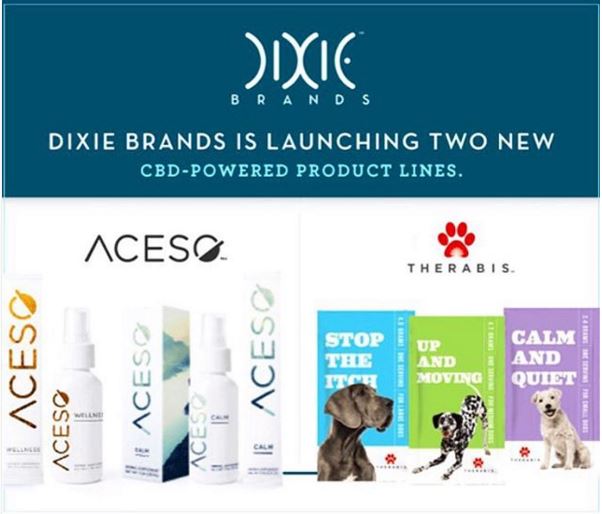 Colorado-based premium marijuana infused products maker Dixie Brands has been busy lately, announcing new products as well as expansion plans in several states and Australia for its core business, but it has also extended its brand into two different areas.  In August, it announced the launch of Aceso, which uses industrial hemp as an input to obtain CBD and other cannabinoids and terpenes for health and wellness products, and Therabis, which does the same except targeting companion animals. Chief Marketing Officer Joe Hodas discussed these developments in September, and now the company has officially launched both lines of products.

Aceso, which is named after the Greek goddess of healing, manufactures its products in Denver and can ship them to all 50 states and to most countries.  The company uses industrial hemp grown in Europe. The company lab tests all of the hemp extracts and batch tests its products. The products contain between 5ng and 7.5mg per serving. Products include:

New York veterinarian Stephen Katz teamed up with Dixie Brands to create Therabis, which is now marketing three different formulations for dogs initially.  Each product targets the size of the dog and is available in either 5 or 30 servings.  The products contain CBD and are sprinkled onto the pet’s food.

Both companies are offering free shipping through 11/30.