This quarter marked a significant period of transformation for Emblem as we strategically aligned the business around our core strengths. This began with the signing of one of the largest business to business cannabis supply agreements, increasing our aggregate annual product supply run rate to approximately 30,000 kilograms beginning in mid-2019.

“During the quarter, we began to realize the significant revenue impact of our Symbl brand within the adult-use market as we fulfilled 100% of our provincial commitments, while maintaining product availability for our growing number of registered patients.”

Highlights for the Third Quarter of 2018

Highlights Subsequent to the Third Quarter of 2018 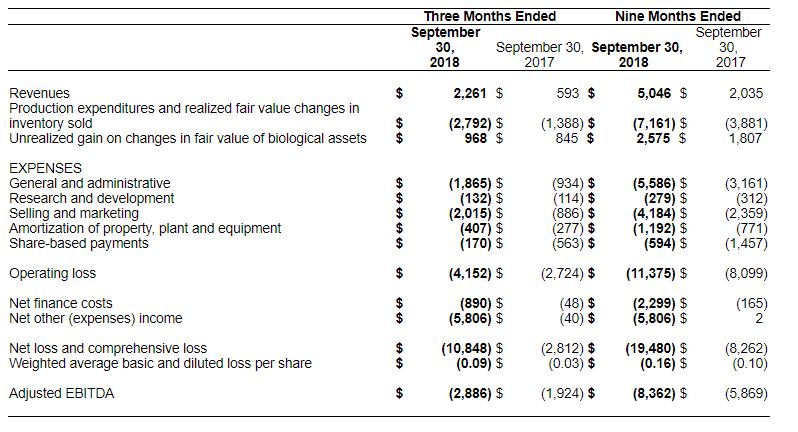 During the three and nine months ended September 30, 2018, total revenues of the Company increased by 281% and 148%, respectively, from the prior year’s comparable periods.  The increase in revenues was a result of the commencement of oil sales during December 2017 and the launch of the adult-use recreational market in the third quarter of 2018.

During the three months ended September 30, 2018, the Company sold dried flower and oil products to the AGLC and OCS for total revenues of $766,000.

“Our significant quarter over quarter revenue increase was driven by the legalization of adult-use cannabis and our supply agreements in the provinces of Ontario and Alberta. We are now pursuing Canada-wide distribution, and subsequent to the third quarter, secured sales approvals in Saskatchewan and B.C.,” said Mr. Dean. “In addition, feedback from patients continues to reinforce that Emblem is a trusted brand of medical cannabis that puts patients’ needs first. Medical innovation, supply and support will continue to be our first and foremost priority, as evidenced by the recent appointment of our new division president, Wayne Kreppner, who brings immense R&D experience to our leadership team. Our commitment to product development and innovation was demonstrated with the recent launch of Atmosphere oral dose-metered sprays.”

General and administrative expenses increased primarily due to the continued build-out of the Company’s management team, as well as higher business development, legal and consulting fees incurred in connection with various strategic initiatives with respect to supply management, cultivation expansion, product development and distribution. Higher selling and marketing costs were due to brand development, brand awareness, and media campaigns in connection with the launch of the Company’s new adult-use brand Symbl, in preparation for the Cannabis Act coming into force.

Emblem is a fully integrated cannabis company focused on driving shareholder value through product innovation, brand relevance, and access to patient and consumer channels. Through its wholly-owned subsidiary Emblem Cannabis Corporation, Emblem is licensed to cultivate, process, and sell cannabis and cannabis derivatives in Canada under the Cannabis Act. Emblem’s state-of-the-art indoor cannabis cultivation facility and Product Innovation Centre is located in Paris, Ontario. Emblem Cannabis Corporation is also the parent company of GrowWise, one of Canada’s leading cannabis education services. Emblem trades under the ticker symbol EMC on the TSX Venture Exchange and EMMBF on the OTCQX Best Market.