The Wall Street Journal broke big news for the global alcohol and cannabis industries today, detailing an investment by Constellation Brands (NYSE: STZ) into Canadian licensed cannabis producer Canopy Growth (TSX: WEED) (OTC: TWMJF). Constellation will acquire 9.9% of Canopy Growth for C$245mm, which at the current exchange rate is equal to about US$191mm. It also has an option to increase the stake to 20%.

The exact terms of what is the first major cross-industry investment will be disclosed in a press release before the market opens tomorrow, but Canopy Growth CEO Bruce Linton stated that it was at a premium to the close of C$12.79 on Friday. Canopy Growth had 165.3mm shares outstanding and fully diluted shares of 176.54mm including 11.24mm options as of June 30th and will report its FY18-Q2 results by November 14th.

Constellation Brands, which has a market capitalization of approximately $41 billion, has a portfolio of wine, beer and spirits brands that include Corona, Clos du Bois, Charles Smith Wines, Robert Mondavi, Casa Noble Tequila and Svedka Imported Vodka. According the WSJ, it purchased the stake to pursue development of drinkable cannabis beverages and to get a head start in advance of eventual legalization in the United States. 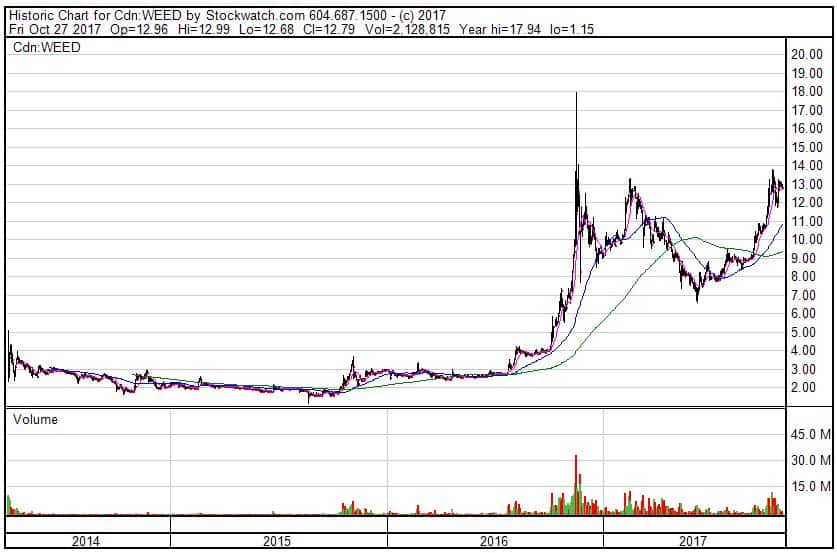