In late 2018, MariMed (OTC: MRMD) announced a $30 Million investment into GenCanna Global, a Kentucky-based hemp company, to help it expand its processing facilities. Today, the company revealed in an SEC Form NT 10-K that it has written off not only its investment in the company, which declared bankruptcy in February, but also an additional $33 million related to its $29 million receivables balance with GenCanna as well as its $4 million unearned revenue.

Through the third quarter, MariMed had reported year-to-date revenue of over $40 million, with $29 million from GenCanna. In its 10-Q, it highlighted the receivables on its balance sheet:

To be clear, the company booked revenue of $29 million from the affilated GenCanna without receiving a dime. This is detailed in the same filing:

During the nine months ended September 30, 2019, MariMed Hemp purchased $21.6 million of hemp seeds for its wholesale hemp distribution business and to develop hemp-derived CBD products. The seeds meet the U.S. government’s definition of federally legal industrial hemp, which was descheduled as a controlled substance and classified as an agricultural commodity upon the signing of the 2018 U.S. Farm Bill. As previously disclosed in Note 1 – Organization and Description of Business, as of September 30, 2019, MariMed Hemp sold a majority of these seeds to GenCanna, a related party, at market value which generated $33.2 million of receipts. The Company provided GenCanna with extended payment terms through December 2019, to coincide with the completion of the seeds’ harvest, although the payment by GenCanna is not contingent upon the success of such harvest or its yield.

As required by the relevant accounting guidance, the Company classified the $33.2 million of billings to GenCanna as a receivable from a related party, with approximately $29,0 million recognized as revenue from a related party for the nine months ended September 30, 2019, and approximately $4.2 million recorded under Unearned Revenue From Related Party on the balance sheet. Upon payment of the receivable balance by GenCanna, the amount in Unearned Revenue From Related Party will be recognized as revenue. 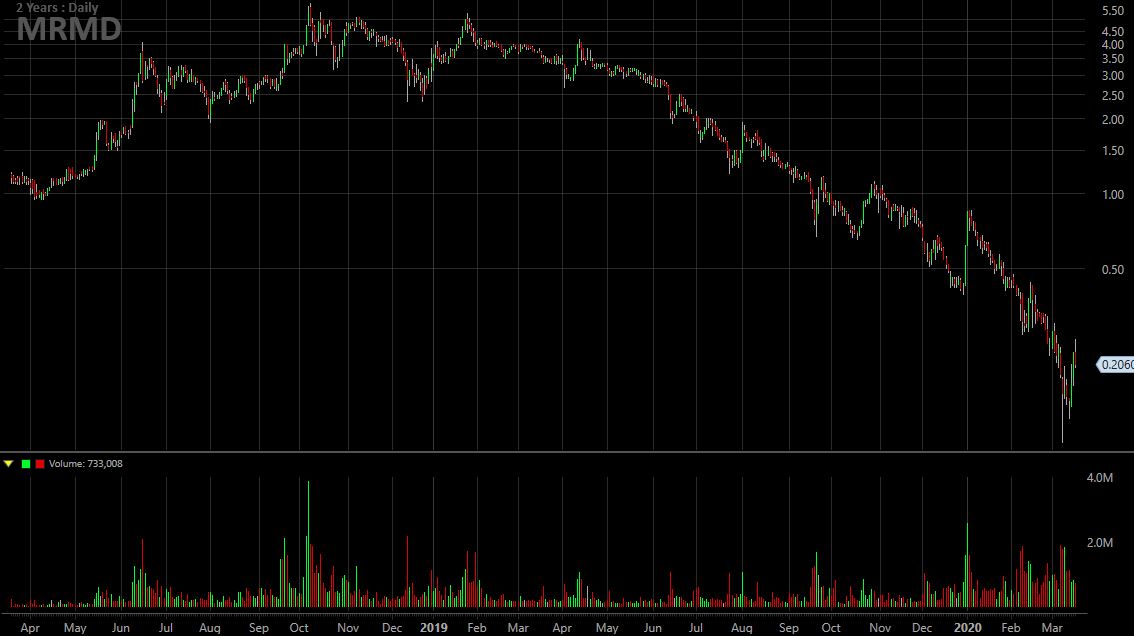 The company expects to file its 10-K by the end of the month. It provided additional information, including full year projected revenue of $46 million, including the $29 million it recognized previously from GenCanna. Q4 revenue, then will be approximately $5.4 million, suggesting modest improvement from the $4.2 million it reported beyond its GenCanna-related sales. Further, full year cost of goods is expected to be $27 million, while operating expenses are projected to be $52-60 million, which includes the $29 million receivable write-down as well as an additional $10-18 million in write-downs. Additionally, it expects to report $40 million non-operating expenses, which includes its $30 million GenCanna investment and $13 million in interest expense. Adding it all up, the company sees a pre-tax loss of $73-81 million for the full year, almost all of which will hit during Q4 given the year-to-date pre-tax loss of $612,369 through Q3.

On February 10, 2020, MariMed Inc. (the “Registrant”) entered into an Amendment Agreement (the “Amendment Agreement”) with respect to the Facility Agreement and Promissory Note (the “Original Note”) dated as of June 4, 2019 between the Registrant, MariMed Hemp, Inc., a wholly owned subsidiary of the Registrant and SYYM LLC (the “Holder”). The Original Note provided for a payment in the amount of $11,500,000 on January 31, 2020 from the Registrant to the Holder. Pursuant to the terms of the Amendment Agreement, the Registrant issued to the Holder an Amended and Restated Promissory Note (the “New Note”) in the principal amount of $11,500,000, bearing interest at the rate of fifteen percent per annum, due on June 15, 2020, with minimum amortization payments of $3,000,000 due on or before April 30, 2020. The New Note is secured by a first priority security interest in the assets of certain of the Registrant’s subsidiaries and brands and a pledge of the Registrant’s ownership interest in certain of its subsidiaries.

Later in the month, the company borrowed $4.4 million from Navy Capital. Investors will learn more shortly about the company’s financial position when it files the 10-K, but clearly the hemp venture has significantly damaged the financial condition of MariMed, which also owns and operates state-licensed cannabis facilities in Delaware, Illinois, Rhode Island, Maine, Massachusetts, Maryland and Nevada.

Illinois Adult-Use Cannabis Sales Decrease 1.5% Sequentially to $129.8 Million in May