After a 57.4% gain in Q1 followed by a 28.0% pullback in Q2, Cannabis stocks, as measured by the Global Cannabis Stock Index, moved sharply lower in July, declining 13.8%: 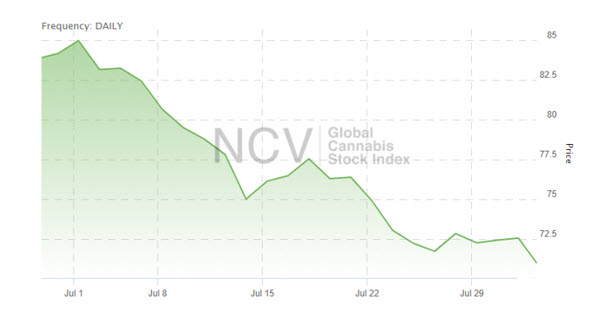 The index, which had 52 qualifying members during the month following the quarterly rebalancing at the end of June, declined 54.9% in 2018 but has rallied 21.4% since the 2018 low set on December 24th through month-end. Global cannabis stocks have gained 13.4% in 2019 despite the gyrations in the market: 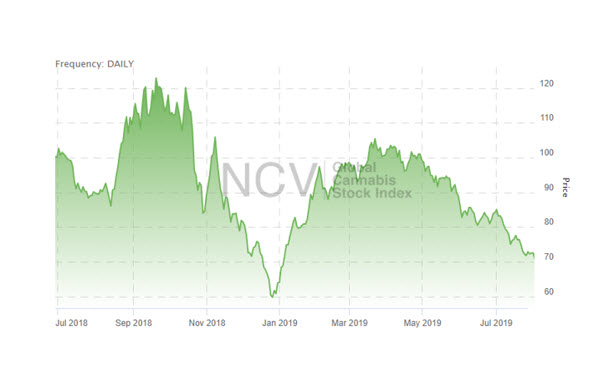 4 names gained more than 10% during July:

Neptune priced an equity offering and then rallied sharply. Charlotte’s Web was apparently recommended by a popular newsletter and expanded distribution with Kroger Stores. Scotts Miracle-Gro moved to an all-time high after reporting earnings that were helped by improvement in its Hawthorne Gardening Company division as the California market improved. Curaleaf rallied after it announced a substantial pending acquisition of a private multi-state cannabis operator, GrassRoots Cannabis.

CannTrust was crushed following revelations that it violated Health Canada rules by growing in rooms, now licensed, before official approval. Akerna imploded after a big run-up in June following the closing of the acquisition of MJ Freeway and name and symbol change. There was no news to explain the decline in Pharmacielo or Body and Mind. TILT Holdings announced a $125 million convertible note financing.

We have also published separate reviews of the performance of the American Cannabis Operators Index: