After beginning the year with a 57.4% gain in Q1 and then dropping for eight consecutive months, the Global Cannabis Stock Index ended December with a big jump that enabled the index to gain 1.1% for the month, closing at 42.20: 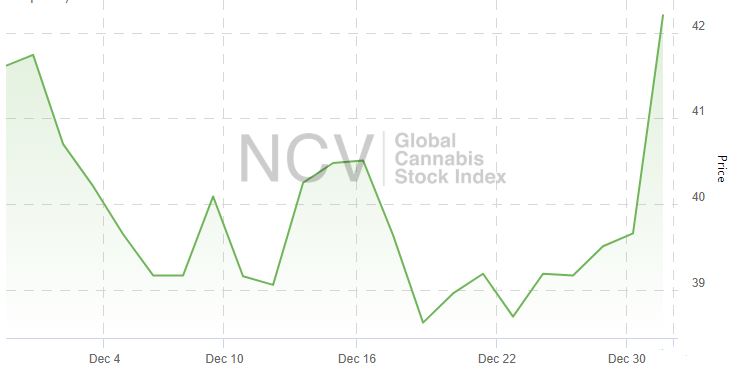 The index, which had 44 qualifying members during the month following the quarterly rebalancing at the end of September, declined 54.9% in 2018 and lost 34.1% in 2019: 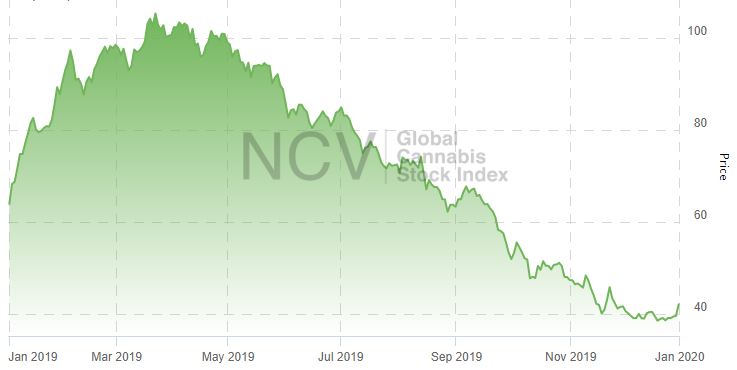 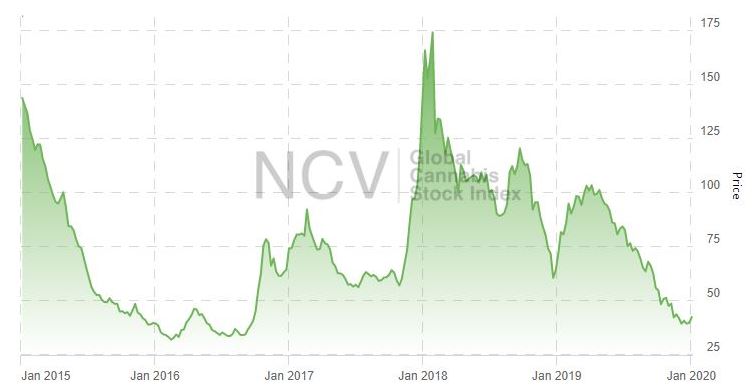 5 names gained more than 20% during December:

Origin House’s strength was driven by the rally in Cresco Labs, with which it is merging in January in an all-stock deal, compounded by a narrowing of the discount to the price implied by the transaction based upon the price of Cresco Labs from 16% to just over 5%.  Sundial, which conducted its IPO at $13 during the summer, bounced off of a post-IPO low set in early December at $1.88. Cresco Labs rallied ahead of legalization in Illinois and its pending acquisition of Origin House. The company also raised $50 million in an additional sale/leaseback transaction announced during the month. Harvest Health & Recreation surged in the final days of the month after it priced a large debt offering. Planet 13 was a top performer for the second consecutive month.

5 names fell by more than 20% during December:

Elixinol’s weakness was due to competitive pressures in the industry as well as the resignation of its founder, Paul Benhaim, who had recently moved into the role of Chief Innovation Officer after having served as CEO. HEXO crushed its stock with a capital raise the day after Christmas that was significantly below the prior closing price. Emerald Health also suffered from a capital raise that pressured its stock along with ongoing concerns regarding its cannabis joint venture, Pure Sunfarms. Charlotte’s Web and CV Sciences, like Elixinol, continued to see pressure on their stocks after a slowdown in growth for the companies and the overall CBD sector became apparent in November during the financial reporting season.

Using data from 12/20, we have rebalanced the index, effective as of 12/31. As a result of lower trading volumes, we have slightly reduced the minimum average daily value traded from $800K to $500K, our first change in more than a year. The number of names in the index in January will be 41, as we have removed nine names and added six new ones. Departing the index due to no longer meeting price or volume criteria are Canopy Rivers (TSX:  RIV) (OTC: CNPOF), Elixnol Global (ASX: EXL) (OTC: ELLXF), Emerald Health (TSXV: EMH) (OTC: EMHTF), Fire & Flower (TSX: FAF) (OTC: FFLWF), Flowr (TSXV: FLWR) (OTC: FLWPF), Khiron (TSXV: KHRN) (OTC: KHRNF), Namaste Technologies (TSXV: N) (OTC: NXTTF) and PharmaCielo (TSXV: PLCO) (OTC: PCLOF). We have also removed Origin House (CSE: OH) (OTC: ORHOF) ahead of its pending acquisition by Cresco Labs (CSE: CL) (OTC: CRLBF).