Cannabis stocks, as measured by the Global Cannabis Stock Index, fell  again in June, declining 4.5% to 100.12, after going into the final week of the month with a small gain: 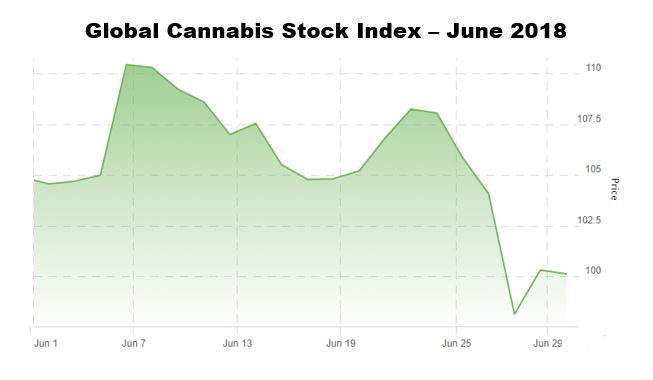 The index, which had 68 qualifying members that were equally weighted at the time of the prior rebalancing in March, declined 24.5% in the first three months of the year and, after another 7.2% decline in Q2, has now decreased 29.5% in the first half of 2018. Despite the losses, the index is still up more than 76% since bottoming in late October.

Among the winners, 22nd Century Group (NYSEMKTS: XXII) was the only company not domiciled in the U.S., and it benefited from its addition to the Russell 2000 index during the month. The biggest gainer, Choom Holdings (CSE: CHOO) (OTC: CHOOF) rose following a capital raise in which Aurora Cannabis (TSX: ACB) (OTC: ACBFF) participated. Neptune Technologies & Bioressources (TSX: NEPT) (NASDAQ: NEPT) rallied following announcement of a deal to provide Canopy Growth (TSX: WEED)(NYSE: CGC) with extraction services.

Nineteen companies posted declines in excess of 15%, with sixteen of them having primary listings in Canada: 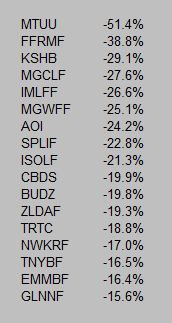