GW Pharma (NASDAQ: GWPH) issued a press release after the close of trading on Monday to report its FY17-Q3 financials and provide an operational update. The most significant news was yet another delay in the timing of the filing of a New Drug Application (NDA) for Epidiolex, its botanically derived CBD for the treatment of rare forms of childhood epilepsy, including Dravet syndrome and Lennox-Gastaut Syndrome. The company had previously suggested that the filing would be complete by mid-2017, but now, after having partially submitted it, GW Pharma expects to complete the process in October.

The first time the company discussed the filing of the NDA, in early February 2016 on a conference call, it projected a filing by the end of 2016. CEO Justin Gover shared this in his opening remarks on that call:

First, we’ve four separate Phase 3 trials from which to form a basis of an NDA submission within the field of pediatric epilepsy. Given the extent of the data set to emerge this year and the multiple regulatory park rate that this data has the potential to provide, we’ve a very high level of confidence in GW progressing to make an NDA submission with FDA for Epidiolex later this year.

It then changed its guidance to the “first half of 2017” in May 2016, as detailed in a conference call to discuss its FY16-Q2. This change was due to its decision to file a single NDA for both LGS and Dravet.

In our view, the submission is most likely to take place during the first half of 2017, and subject to the outcome of the LGS trials, would include data supporting the approval of Epidiolex in both indications. The work on compiling this NDA has now commenced.

More recently, it made a change in its guidance in February, when it reported its fiscal Q1 in a press release, to “middle of the year”.

“As we look forward to 2017, our primary focus is on completing the Epidiolex NDA, which we expect to submit to the FDA in the middle of this year. With three positive Phase 3 trials delivered in 2016, we remain confident in the prospects for Epidiolex’s approval and are accelerating our preparations for a highly successful launch,” stated Justin Gover, GW’s Chief Executive Officer.

Although we had originally anticipate submission of the full NDA around now, we recently requested and obtained a permission from FDA, to make a rolling submission, in order to allow for the review to commence in the same timeframe, whilst we finalize completion of the CMC module. This final CMC section is expected to be submitted in October, and indeed, is already near completion. It primarily awaits data from final API validation batches, which are being manufactured this month. Data from these API batches will be available to us next month, following which they can be incorporated into the submission.

He later expanded on this statement in response to a question, explaining that the delay is due to its bringing on a new extraction facility:

And in terms of what this really means, this API facility has already been used for the last several years, for our clinical trials manufacturer. The difference here is that, this API that’s going to be manufactured this month, uses material from the extraction facility that has newly commissioned that we brought online. So it’s essentially bridging between those two.

GWPH stock has performed very well since the NASDAQ IPO in 2013, but since February, when it announced another delay in the filing of the NDA, it has dramatically underperformed the biotech sector as measured by ETFs iShares NASDAQ Biotechnology Index (NASDAQ: IBB) and SPDR S&P Biotech (NYSE: XBI) despite a recovery over the past month. Here is the relative performance year-to-date through 8/7: 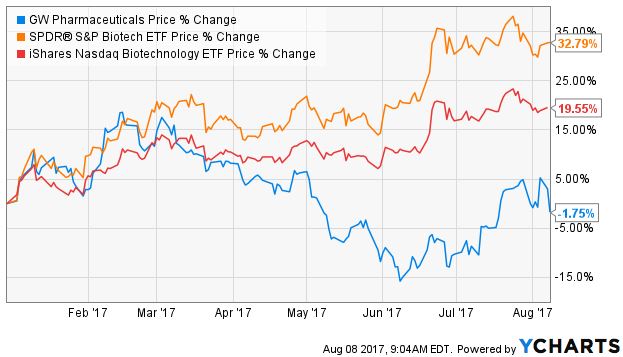 GWPH, which is down another 8% to about 105 in the first hour of trading, says that it remains on track to file its NDA in Europe later this year. The company also has an extensive pipeline under development, including additional indications for Epidiolex. GW Pharma expects a PDUFA date of June 2018 for Epidiolex, but suggested that there is a “50-50 chance” that the FDA could have an advisory committee meeting, which could further delay the potential approval.