MARYSVILLE, Ohio, Feb. 01, 2022 (GLOBE NEWSWIRE) — The Scotts Miracle-Gro Company (NYSE: SMG), one of the world’s leading marketers of branded consumer lawn and garden as well as hydroponic and indoor growing products, today announced financial results for its fiscal first quarter highlighted by a profitable quarter in the U.S. Consumer segment for only the second time in company history.

Company-wide sales in the quarter decreased 24 percent to $566.0 million, consistent with a pre-announcement of expected results issued on January 4. For the quarter ended January 1, 2022, the company reported a seasonal loss from continuing operations of $0.90 per share. The non-GAAP adjusted loss – which is the basis of the Company’s guidance – was $0.88 per share.

“The U.S. Consumer segment continues to exceed our expectations and got off to a good start, especially given the difficult comparison from the 147 percent growth the segment reported in the first quarter a year ago,” said Jim Hagedorn, chairman and chief executive officer. “Consumer purchases at our largest retail partners increased 3 percent in units for the quarter and 9 percent in dollars against 40 percent growth for each measure a year ago. The continued level of consumer and retailer support leaves us optimistic about the strength of the segment as we prepare for the upcoming lawn and garden season.

While Hawthorne sales declined due to broader market conditions, we made two important acquisitions during the quarter and took several steps to strengthen the business when growth returns. We have told shareholders for years that our results in this segment could be choppy at times, but our long-term optimism about the industry, and our confidence in the Hawthorne business, is unchanged. 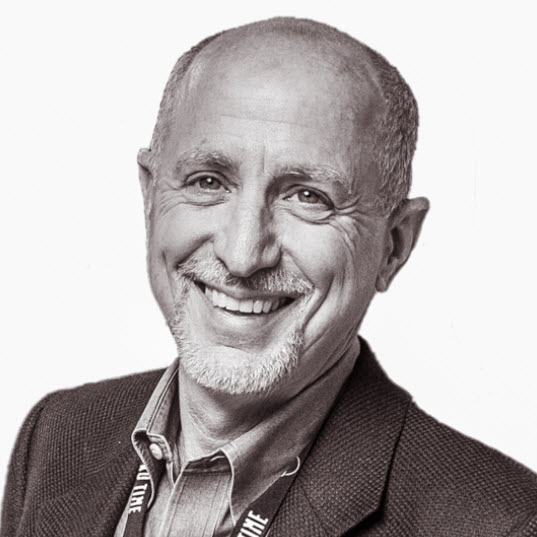 For the fiscal first quarter, the Company reported sales of $566.0 million, down 24 percent from $748.6 million a year ago. First quarter sales for the Hawthorne segment decreased 38 percent to $190.6 million. The decline, which was against growth of 71 percent for the same period a year ago, had been previously announced and was driven primarily by an over-supply of cannabis grown in state-authorized markets that has led to a temporary decline in commercial cultivation activity. Supply chain disruptions also contributed to the decline. The segment reported a loss of $5.3 million in the quarter compared to income of $40.4 million a year ago.

U.S. Consumer segment sales decreased 16 percent to $342.4 million. The decline was better than expected given the 147 percent revenue growth in the first quarter a year ago. The segment reported income of $10.7 million, compared with the record result of $45.3 million a year ago. The result marked only the second time the segment has recorded a profit in the first quarter.

The Company said the better-than-expected result in U.S. Consumer, coupled with additional pricing actions that will take effect in the third quarter, is allowing it to increase full-year sales guidance in the segment to a range of plus 2 percent to minus 2 percent. This compares to a previous range of flat to minus 4 percent. The improved guidance does not require the Company to adjust its outlook for the balance of the lawn and garden season but allows it to maintain guidance for adjusted earnings per share despite its recently revised reduction in the full-year sales outlook for Hawthorne.

The company-wide GAAP and non-GAAP adjusted gross margin rates were 21.0 percent compared with 25.5 percent and 26.7 percent, respectively, a year ago. The decline was driven primarily by a decrease in fixed cost leverage as well as higher material, warehousing and distribution costs and was partially offset by increased pricing benefits as well as favorable segment mix. Selling, general and administrative expenses (SG&A) decreased 2 percent to $154.1 million.

“Most of the gross margin rate decline in the quarter was expected due to lower fixed cost leverage compared with year-ago volume that was at record levels,” said Cory Miller, chief financial officer. “While material costs were higher than our original estimates, we have communicated an additional price increase to our retail partners that should keep us on track to cover increased commodity costs on a full-year basis. We have been encouraged in recent weeks to see a decline in several key raw material inputs, which seeds a level of cautious optimism that the pressure we’ve been dealing with for the past year may finally be easing.”

Separately, the Company announced plans to consolidate U.S. lighting manufacturing for Hawthorne into a single location and to close another recently acquired assembly facility and move those operations to its Santa Rosa, California facility. A restructuring charge of up to $5 million is expected to be recorded in the second quarter and will be excluded from the Company’s full-year adjusted results.

“This consolidation has been under consideration for months and, given the current market conditions and our strong inventory position, we chose to make these moves now with limited impact on the business,” Miller said. “As important, the consolidation of our manufacturing footprint is expected to dramatically lower the per-unit price of some of our most important LED lighting fixtures, which we believe will strengthen Hawthorne’s competitive position in the years to come.”

The Company will discuss results during a webcast and conference call today at 9:00 a.m. EST. To participate in the conference call, please call 1-888-394-8218 (Conference Code: 1265183). A replay of the call can be heard by calling 1-888-203-1112. The replay will be available for 15 days. A live webcast of the call and the press release will be available on the Company’s investor relations website at http://investor.scotts.com. An archive of the press release and any accompanying information will remain available for at least a 12-month period.

With approximately $4.9 billion in sales, the Company is one of the world’s largest marketers of branded consumer products for lawn and garden care. The Company’s brands are among the most recognized in the industry. The Company’s Scotts®, Miracle-Gro® and Ortho® brands are market-leading in their categories. The Company’s wholly-owned subsidiary, The Hawthorne Gardening Company, is a leading provider of nutrients, lighting and other materials used in the indoor and hydroponic growing segment. Another wholly-owned subsidiary, The Hawthorne Collective, has been established to invest in emerging areas of the cannabis industry. For additional information, visit us at www.scottsmiraclegro.com. 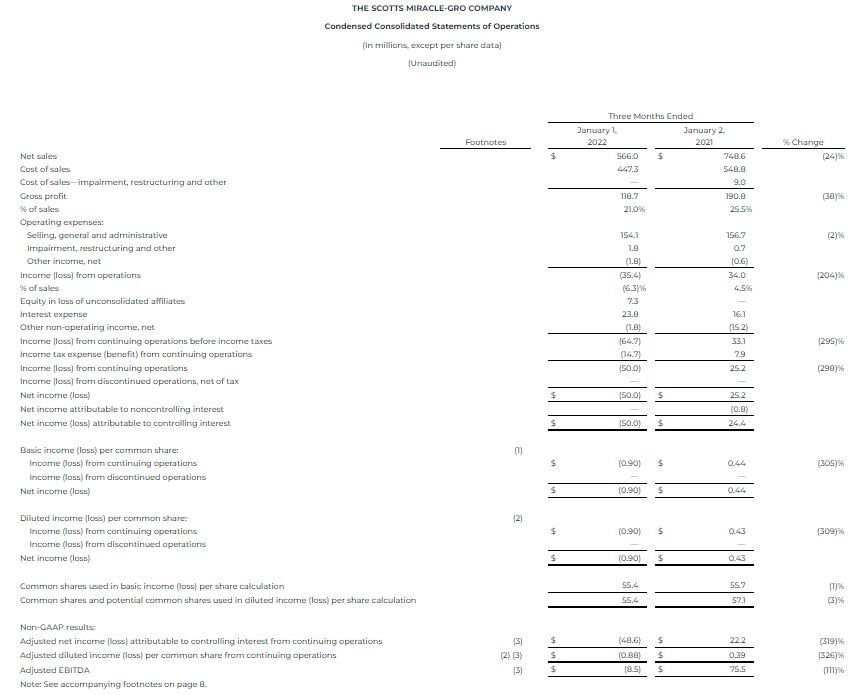 The performance of each reportable segment is evaluated based on several factors, including income (loss) from continuing operations before income taxes, amortization, impairment, restructuring and other charges (“Segment Profit (Loss)”), which is a non-GAAP financial measure. Senior management uses Segment Profit (Loss) to evaluate segment performance because they believe this measure is indicative of performance trends and the overall earnings potential of each segment.

The following tables present financial information for the Company’s reportable segments for the periods indicated: 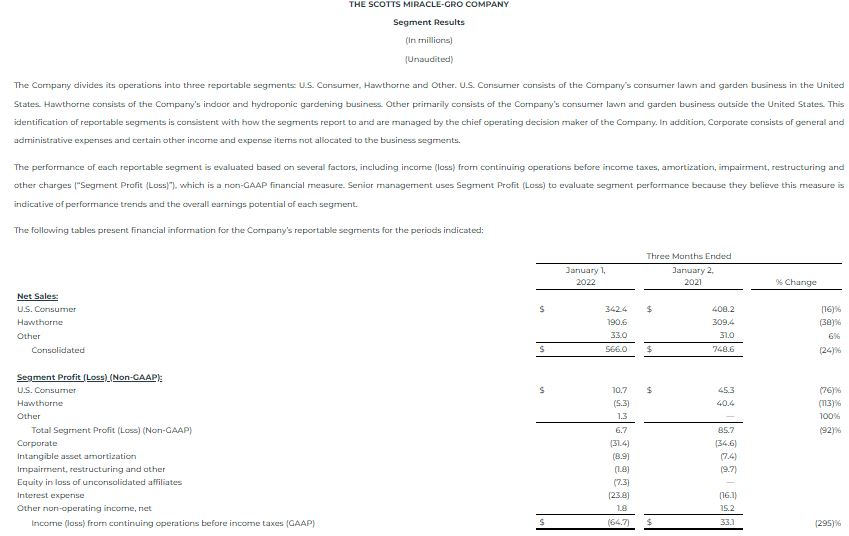 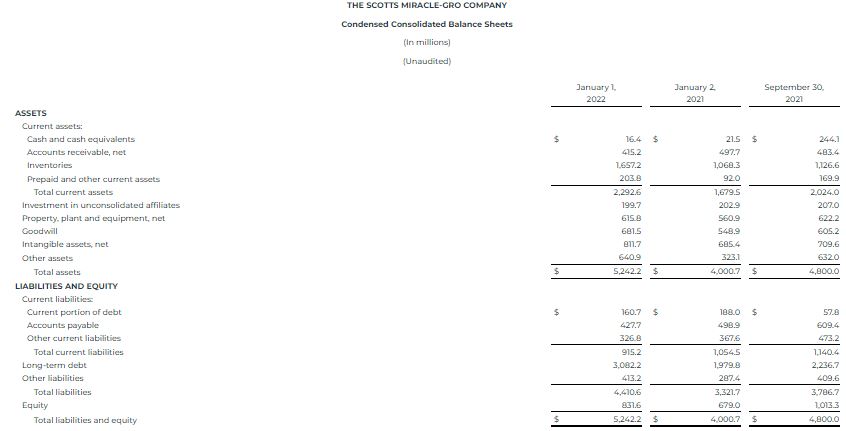 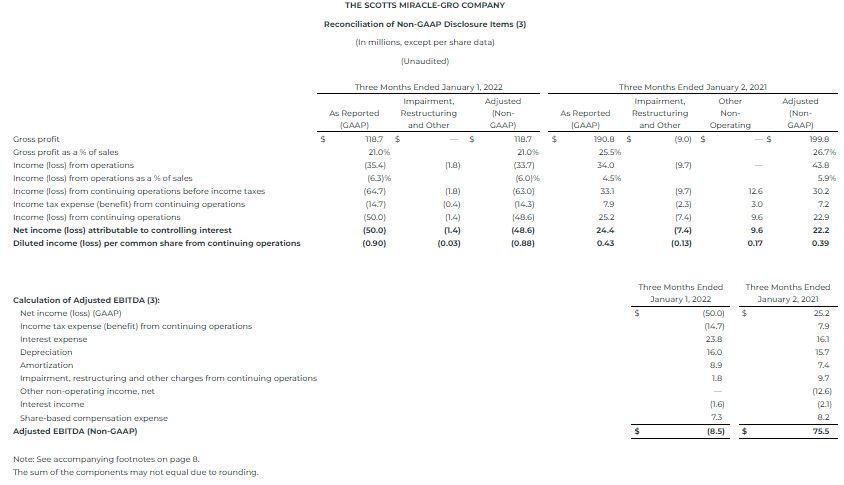 Use of Non-GAAP Measures

In addition to GAAP measures, management uses these non-GAAP financial measures to evaluate the Company’s performance, engage in financial and operational planning and determine incentive compensation because it believes that these measures provide additional perspective on and, in some circumstances are more closely correlated to, the performance of the Company’s underlying, ongoing business.

Non-GAAP financial measures reflect adjustments based on the following items:

The tax effect for each of the items listed above is determined using the tax rate and other tax attributes applicable to the item and the jurisdiction(s) in which the item is recorded.

The reconciliations of non-GAAP disclosure items include the following financial measures that are not calculated in accordance with GAAP and are utilized by management in evaluating the performance of the business, engaging in financial and operational planning, determining incentive compensation and determining the amount of cash available for dividends and discretionary investments, and by investors and analysts in evaluating performance of the business: