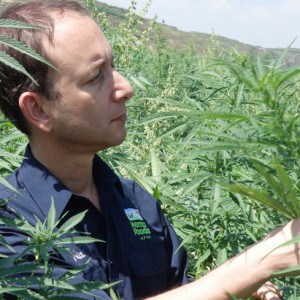 UK native Paul Benhaim, a pioneer in the hemp industry who is best known in the U.S. as being CEO of Colorado-based Elixinol, which manufactures products with CBD derived from hemp, is down on the prospects for Australia to embrace cannabis. Benhaim, who has been involved in the hemp industry since 1991, is also the founder of Hemp Foods Australia and has been cultivating and manufacturing Hemp on a large scale around the world.

Benhaim shared his frustration with the the political environment in Australia in a press release issued earlier this week. He appreciates that the country is moving forward with legislation that will permit licensing, but the rules, in his view, cover only growing (without permitting consumption).

It looks good on the outside. It helps our Government look proactive when it comes to the issue of medical cannabis, but in reality Australia may still be years away from access to real medicinal marijuana products.

Paul’s scepticism stems from over 25 years as an early pioneer in the hemp food and cannabis industries both here and globally. In 2013 Paul set up the Elixinol medical cannabis company in the United States rather than his home State of New South Wales. Manufacturing his low THC whole plant cannabis tinctures and medical pastes would be deemed illegal here in Australia, even with only insignificant amounts of the psychoactive THC present in his products.

Elixinol has up until this point focused their energies on creating products that are safe, predictable and free from THC to allow access to the benefits of medical cannabis to children and adults suffering from a wide range of illnesses. “With this new proposed legislation, in reality we are no closer to where we want to be, and that’s here in Australia,” adds Paul.

While the new legislation allows for cultivation of medical grade cannabis under a Federal controlled licensing system, it will be left up to the States to decide how the product will be consumed, if at all.

Allan Jones on Sydney’s 2UE praised the Minister for Health and Medical Research, Pru Goward for the recent legislation change stating that, “Pru Goward had flown to the UK and practically pleaded with GW Pharmaceuticals to trial their drug Epidiolex on our sick children”.

Paul continues, “Companies like ours exist, with Australian teams, and the Government knows we exist. Our Elixinol products are safe, predictable and contain no synthetic chemicals, unlike some of the synthetic ‘cannabis’ products that are currently being trialled in this country.”

In fact there has not been a single recorded death attributed to the consumption of cannabis in more than 6000 years, an impeccable record to say the least.

Paul explains, “The human endo-cannabinoid system is a complex system, naturally occurring phyto cannabinoids present in cannabis can be easily and readily utilised by the human body correctly. As soon as you begin to isolate any one particular cannabinoid or synthesise one, you may start running into serious problems.”

Paul’s comments follow the recently reported French drug study which caused the death of one person and caused permanent brain damaged to another five.* This was caused by a reaction to a drug that was targeting the human endo cannabinoid system, the very same receptors that natural cannabis targets in mammals. Initially the world media reported that the deaths where attributed to a cannabis based drug, but it was later revealed that the trial involved no real cannabis at all.

“What I’m most concerned about is that this legislation may stifle this emerging industry rather than promote it, as most State Governments are already leaning heavily towards the pharmaceutical industry over experienced manufactures of naturally derived products. We approached the QLD Department of Agriculture to allow us to grow medical cannabis this week after the federal announcement. We were bluntly told by a Queensland department staff member that ‘there is no way you were going to be allowed to grow medical cannabis in Queensland ever.’ ”

So far it’s Victoria that is leading the way in natural medical cannabis. The Victorian Government has created their own legislation surrounding the use of plant derived product.

“They seem to understand and recognise the benefits of using whole plant products and want to support the people that can benefit most from this product,” Pauls says.

Paul doesn’t want the Government to miss the point of allowing access to medical cannabis. “This entire movement was started from the grass roots, mums and dads who had no option but to break the law to treat their kids with real cannabis from the black market. Will this new legislation leave them wanting?. Not allowing or severely restricting access to this medicine really defeats the purpose of the bill. I really hope the other states follow the lead of Victoria and allow access to those who need it. We have the ability to grow and manufacture in any state through our investment and know-how. We will just have to wait and see which state wants us.”

Although cautious about the direction of the medical cannabis industry in Australia, Paul is upbeat about where Elixinol is headed as a company. “We are one of the largest most respected medical cannabis companies in the world. We have helped many thousands of people with our products globally and we will do our best to make sure Australian patients have access to the same.”