This news release constitutes a “designated news release” for the purposes of the Company’s prospectus supplement dated December 3, 2021 to its short form base shelf prospectus dated April 22, 2021.

CALGARY, AB, June 14, 2022 /CNW/ – High Tide Inc. (“High Tide” or the “Company”) (NASDAQ: HITI) (TSXV: HITI) (FSE: 2LYA), a leading retail-focused cannabis company with bricks-and-mortar as well as global e-commerce assets, filed its financial results for the second fiscal quarter of 2022 ended April 30, 2022, the highlights of which are included in this news release. The condensed interim consolidated financial statements for the three and six months ended April 30, 2022 and the accompanying management’s discussion and analysis can be accessed by visiting the Company’s website at www.hightideinc.com, and its profile pages on SEDAR at www.sedar.com, and EDGAR at www.sec.gov.

“Once again, I can proudly report that High Tide continues to see consistent and significant growth year-over-year and sequentially with every passing quarter, despite a persistently challenging macro environment and the state of the capital markets. Since its launch, the ongoing growth of our innovative discount club model has resulted in a 48% increase in daily same-store sales, contributing to our 98% revenue growth over the same quarter last year. While we aggressively gain retail market share in Canada ahead of our peer group, we have remained adjusted EBITDA positive for the ninth straight quarter. Although we are pleased with our EBITDA of $2.4 million this quarter, we highlight that, as the only pure-play cannabis retailer trading on Nasdaq, direct ongoing costs incurred associated with our Nasdaq listing amounted to approximately $750,000 this quarter. Our continued EBITDA positivity is a critical point for us, as we are steadily growing at the same time when many of our publicly-traded and private peers are facing fierce challenges and slowing down,” said Raj Grover, President and Chief Executive Officer of High Tide.

“We also continue to be the acquirer of choice, as many independents see compelling value in joining the High Tide family in this highly competitive retail landscape. Our recently-launched Cabana Cannabis Co. products will further contribute to healthy margin increases, since we expect our house-branded products to represent a 20-30% share of our total bricks-and-mortar sales over the long term,” added Mr. Grover.

We are currently sitting at 126 stores across Canada, and remain confident that we will reach our goal of 150 stores by the end of the 2022 calendar year. Last quarter, we became the second-largest revenue-generating Canadian cannabis company that reports in Canadian dollars, and we are now on an annualized revenue run rate trajectory of approximately $325 million. 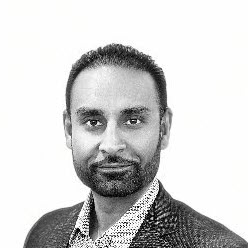 I am lazer-focused on ensuring that High Tide’s growth trajectory will bring us to that coveted number one position in Canada. I want to give a huge shout out and thanks to the entire High Tide team for consistently producing industry-leading results

(Expressed in thousands of Canadian Dollars) 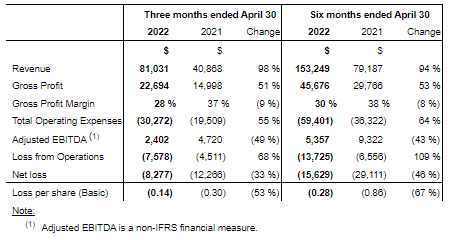 The following is a reconciliation of Adjusted EBITDA to Net loss: 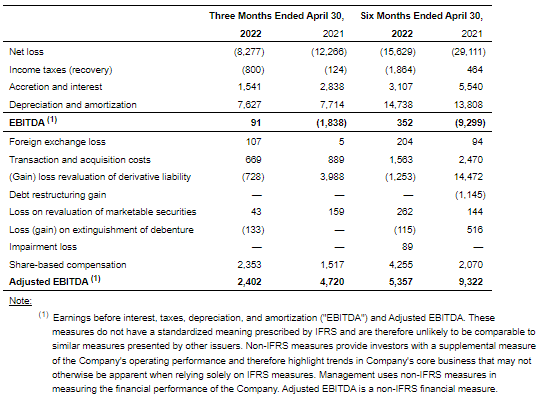 High Tide continues to be the largest non-franchised retailer in the Canadian bricks-and-mortar cannabis market with 126 locations across the country. The Company’s launch of its innovative discount club model near the end of the fourth fiscal quarter of 2021 has delivered tremendous results to date, with same-store sales having continued to accelerate throughout the second fiscal quarter of 2022. As stated in this financial release, the Company reported revenue of $81.0 million in the second fiscal quarter of 2022, which is the second-highest quarterly revenue figure amongst all Canadian cannabis companies that report in Canadian dollars. Through organic growth and accretive M&A, the Company expects to continue to increase its revenue through the third fiscal quarter of 2022, and for the remainder of the year. With 126 stores, the Company is well on its way to achieving its goal of increasing its Canadian retail store portfolio to at least 150 locations by the end of 2022. The Company anticipates entering the British Columbia market within the third fiscal quarter of 2022, and will continue growing strategically in other provinces where it currently operates. The Company has been integrating its recently-acquired customized Fastendr™ technology across its retail store network, which it expects will drive greater efficiency and improve the customer experience. Fourteen of the Company’s stores are now equipped with the Fastendr™ technology. Subject to hardware availability and logistics, the Company anticipates having all of its Canna Cabana locations outfitted with this technology by the end of the 2022 calendar year. The Company expects continued launches of more Cabana Cannabis Co. branded SKUs throughout 2022 and 2023. The Company also has firm plans to build upon its existing momentum in the international hemp-derived CBD and consumption accessories e-commerce sectors. Throughout 2022, High Tide will continue to integrate and expand CBD brands that it acquired in 2021, including NuLeaf Naturals, FAB CBD, and Blessed CBD. As part of the identified synergies within the Company’s diversified ecosystem, and as previously communicated, the Company recently launched subscribe-and-save programs on the platforms of all three of its CBD subsidiaries. Through its United Kingdom-based subsidiary, Blessed CBD, the Company entered the German market with the organic sale of premium hemp-derived CBD products on its e-commerce platform. The Company continues to monitor the German legislative process closely, given that the new German government has recently indicated its intent to introduce a cannabis legalization bill by the end of 2022. In addition to growing its in-house brands, High Tide intends to continue growing its online retail portfolio through further strategic and accretive acquisitions.

In addition, the Company, through its subsidiaries (“Subsidiaries”), intends to restart sales in certain states in the United States of products containing hemp-derived cannabinoids, including delta-8 tetrahydrocannabinol (“Delta-8”) and delta-9 tetrahydrocannabinol (“Delta-9”), extracted from cannabis plants that meet the definition of “hemp” under the Agriculture Improvement Act of 2018. The legality of Delta-8 derived from hemp is uncertain and varies from state to state, with some states banning the sale of products containing Delta-8. The Company will not sell into any states where the sale of Delta-8 is prohibited at the state level. At the federal level in the United States, the legality of Delta-8 remains unclear. The United States Drug Enforcement Agency (“DEA”) has issued a statement that some have interpreted as making hemp-derived Delta-8 illegal, while it has issued other statements that some interpret to the contrary. As a result, there is a risk that the DEA could consider Subsidiaries’ Delta-8 products an illegal controlled substance under the U.S. Controlled Substances Act (the “CSA”) or the Federal Analogue Act in the United States. Please refer to the Company’s management discussion and analysis dated June 14, 2022, available on www.sedar.com, for more information about the risks associated with Delta-8 and Delta-9.

The Company will host a webcast and conference call to discuss their unaudited results and outlook at 5:30 PM (Eastern Time) today, Tuesday, June 14, 2022.

Participants who wish to ask questions during the event may do so through the call-in line, the access information for which is as follows:

High Tide is a leading retail-focused cannabis company with bricks-and-mortar as well as global e-commerce assets. The Company is the largest Canadian retailer of recreational cannabis as measured by revenue, with 126 current locations spanning Ontario, Alberta, Manitoba, and Saskatchewan. High Tide was featured in the third annual Report on Business Magazine’s ranking of Canada’s Top Growing Companies in 2021 and was named as one of the top 10 performing diversified industries stocks in the 2022 TSX Venture 50™. The Company is also North America’s first and only cannabis discount club retailer, featuring Canna Cabana, Meta Cannabis Co., and Meta Cannabis Supply Co. banners, with additional locations under development across the country. High Tide’s portfolio also includes retail kiosk and smart locker technology – Fastendr™. High Tide has been serving consumers for over a decade through its established e-commerce platforms including Grasscity.com, Smokecartel.com, Dailyhighclub.com, and Dankstop.com and more recently in the hemp-derived CBD space through Nuleafnaturals.com, FABCBD.com, BlessedCBD.co.uk, and BlessedCBD.de, as well as its wholesale distribution division under Valiant Distribution, including the licensed entertainment product manufacturer Famous Brandz. High Tide’s strategy as a parent company is to extend and strengthen its integrated value chain, while providing a complete customer experience and maximizing shareholder value.