Despite their very narrow focus limited to Canadian licensed producers and then a hodge-podge of other companies that aren’t really related to cannabis, investors have piled on, resulting in demand for the underlying holdings and distorting the prices of certain companies. On Friday, HMMJ traded 3.97mm shares across all markets, including 2.2mm on the TSX, for a total value in excess of C$86mm. The smaller MJX traded 2.54mm shares for a total value of almost US$92mm.

HMMJ, which now reports C$713mm in net assets, went public through an IPO at $10.00 per share for 1mm shares and began trading on April 5th. Assets soared to C$88mm within the first week. The fund is managed by Horizons Exchange Traded Funds and charges 0.75% per year as a management fee. Its benchmark is the North American Marijuana Index, which requires the market cap to be in excess of C$75 million with certain minimums for trading volume and value. Importantly, the index, which is rebalanced quarterly, is weighted by market values of the holdings but is capped at 10% exposure.

The fund’s holdings as of 1/4 include: 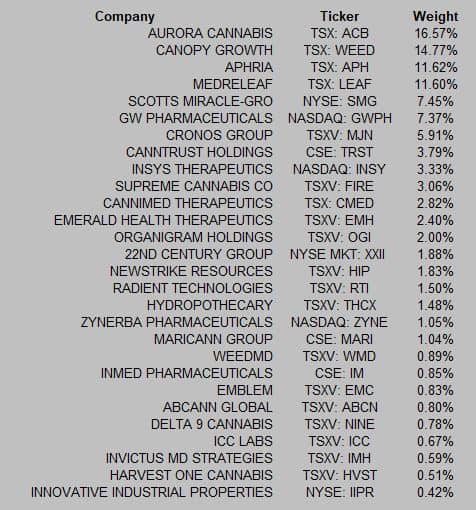 We have been critical of the construction of the ETF, but it has improved to some degree as it has broadened its exposure and eliminated or reduced certain names. Scotts Miracle-Gro (NYSE: SMG) has only minimal exposure to the cannabis market compared to its overall sales, while biotechs Insys Therapeutics (NASDAQ: INSY) and Zynerba (NASDAQ: ZYNE) are developing drugs based on synthetic molecules.

From a high level perspective, the vast majority of the exposure is to the largest licensed producers (LPs) in Canada, with the six largest in terms of sales accounting for 61% of the ETF. In aggregate, Canadian LPs represent 83%. SMG represents about 7%, while the two biotechs represent a little over 4%. The balance is split between Canadian ancillary companies, a Canadian company operating as a cultivator in Uruguay and then the only U.S. company outside of the synthetic cannabinoid space, Innovative Industrial Properties (NYSE: IIPR). When HMMJ, it had only 14 holdings, and its exposure to Canadian LPs, now 83%, was about 44%. Here is how HMMJ has fared since its inception compared to its three largest Canadian LP holdings at the time, validating our criticism that investors would be better off just picking the these names (it’s not even close, even if one were to add in the small distribution made by HMMJ): 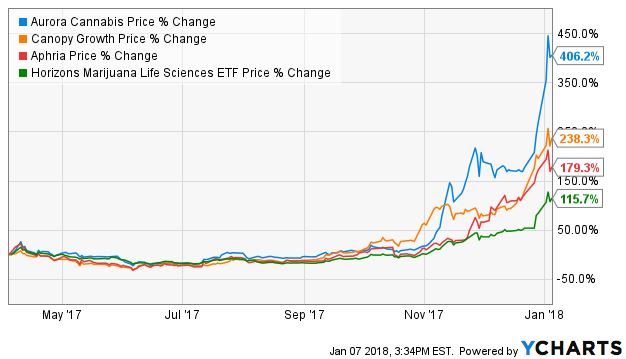 At this point, with the better diversification, I am less negative on the fund than I have been previously, as it now comes close to being a more narrow “Canadian LP ETF”, even with names that I don’t think really reflect the cannabis market, as mentioned above. The appeal is even greater to investors with small total investments, as commissions generated building a diversified portfolio might impact their overall performance.

The backstory on MJX is a bit disturbing, as it was a failed fund focused on Latin America that changed mandates. When it debuted in trading the day after Christmas, it had just 200K shares and an NAV of about $6mm.  As of 1/4, it reported assets of $257mm. The fund is managed by ETF Managers Group, which charges a 0.75% management fee. Its benchmark is the Prime Alternative Harvest Index, which has qualitative requirements as well as quantitative ones, including a minimum market cap of $200mm and a three-month average daily trading volume of at least $500,000. Like the index employed by HMMJ, this is based on market cap but with a cap that is even lower than the 10% in its peer, though I was not able to find the exact methodology. Here were the top 10 holdings at launch as provided in the by the company in a Fact Sheet (note that Cronos Group is misspelled): 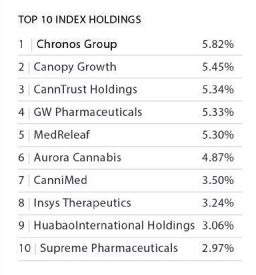 The complete list of holdings as of January 3rd reveals more diversification than HMMJ despite a similar number of holdings (30 compared to 29 for HMMJ): 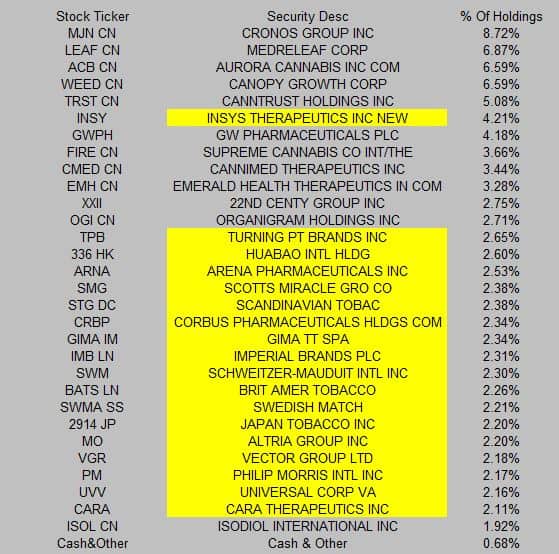 I have highlighted in yellow a number of companies that don’t appear to be particularly leveraged to legal cannabis, if at all, especially tobacco companies that file with the SEC and that have never mentioned cannabis, which would be legally required. The 6 largest Canadian LPs in terms of sales represent just 28.6%, with the fund and the index excluding Aphria (TSX: APHQF) (OTC: APHQF) most likely due to its U.S. investments, less than half the exposure of HMMJ. Total Canadian LP exposure is 46.94%. Oddly, its index had Cronos Group (TSXV: MJN) (OTC: PRMCF) as the largest position at inception despite its substantially lower market cap than each of the next five names. The cannabinoid biotech companies and other biotech companies that aren’t even focused on synthetic cannabinoids total almost 9% of the ETF.

How the ETFs are Distorting the Market

Funds are flowing into both ETFs, sparked perhaps by the excitement over California legalizing. Ironically, neither fund holds positions in any companies that derive a significant portion of sales from the U.S. legal cannabis industry. It appears as though uninformed ETF buyers are piling into the new MJX and investing in a combination of Canadian LPs and global tobacco companies primarily.

The fact that Cronos Group has such a high weighting relative to its market cap compared to larger peers has benefited the company. Each dollar invested into MJX results in over 8 cents into Cronos Group, which impacts it more due to its lower market cap, while the other large LPs get less than 7 cents (and none for Aphria). Here is the performance of Cronos Group (81.1%) compared to the four largest LPs in terms of market caps since MJX launched, trailing only Aurora Cannabis (TSX: ACB) (OTC: ACBFF) : 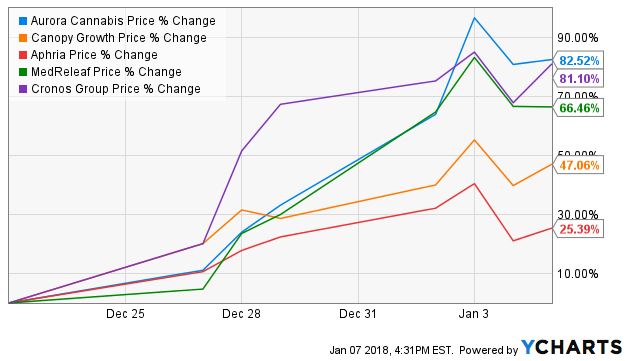 Another strong performer since MJX launched has been Emerald Health (TSXV: EMH) (OTC: EMHTF), which has a low weighting at 3.3% but also a substantially lower market cap. In addition, Emerald is controlled by Emerald Sciences, which owns over half the shares, substantially reducing the float. Here is how Emerald Health has fared in the same time-frame: 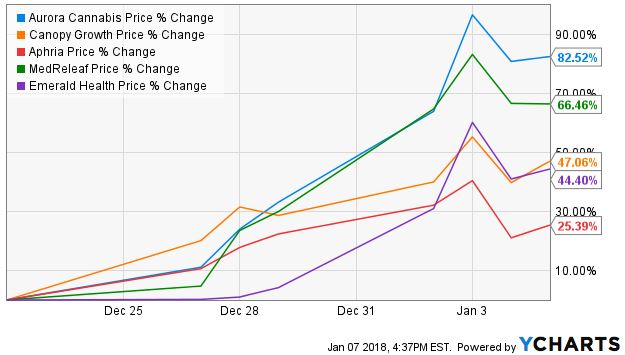 While not as impressive as the Cronos Group performance, it’s worth noting that since year-end, Emerald is up 38.6% compared to the average Canadian LP increasing 29.1% and the median return of 16.7%, 4th best: 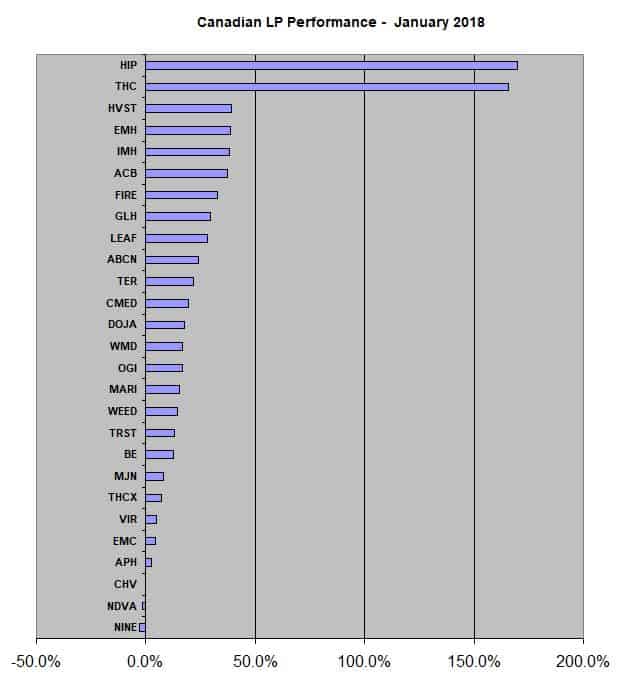 It’s also worth noting that both Emerald Health and Cronos Group have announced equity sales in the past week, with Emerald Health pricing C$15mm units at C$5.00 (with C$6.00 warrants) and Cronos Group pricing C$40mm in shares at C$8.75, both bought deals. Typically equity offerings weigh on stock prices, so the strong performance stands out even more. Supreme Cannabis Company (TSXV: FIRE) (OTC: SPRWF) may also be benefitting from its high weighting in both ETFs compared to its market cap.

For investors in the Canadian LP space, paying attention to the ETFs will be increasingly important. The recent inflows into HMMJ and MJX may be throwing gasoline on a fire and appear to be helping some LPs in particular in the process. In addition to monitoring the net assets and any changes that the funds make in their exposures, investors should keep in mind that the quarterly rebalancing of the indexes and funds could impact prices. Finally, for those looking to invest in the U.S. cannabis industry, neither ETF really does so. For those who are looking to invest in Canadian LPs, HMMJ is a far superior choice over MJX.

This Strategic Switcheroo Doesn’t Excite Us