The cannabis industry faces several significant burdens, though perhaps none as onerous as 280E, an antiquated tax rule that prohibits companies that grow, process or sell cannabi from deducting operating expenses, even if done so in a state-legal environment. Companies often face marginal tax-rates in excess of 70%, and sometimes they can be required to pay federal taxes even when they have no income.

The National Cannabis Industry Association (NCIA)  has made fighting 280E a priority. Lobbying is one of the key focuses of the organization, and its efforts have played a role in the introduction of significant cannabis legislation, including several bills introduced in late March, two of which are focused on eliminating 280E, including S. 777: Small Business Tax Equity Act of 2017 and H.R. 1810: Small Business Tax Equity Act of 2017. Beyond lobbying, it has also published a white paper to help explain how 280E works and how it harms cannabis businesses.

While seeing legislation introduced in both the House of Representatives and the Senate is encouraging, the odds, at present, are quite low that either of these bills will pass. According to PredictGov, the chances of passage are just 1% for both bills. Fortunately, there is another path, through the judicial process. Oakland dispensary Harborside Health, represented by attorney Henry Wykowsi, has filed a suit against the federal government and is close to getting a ruling from the judge after initial arguments being held last June. I spoke with Wykowski in late March, and he is confident that a victory lies ahead and will end 280E (and put him out of work!).

If Wykowski is victorious, 280E would end immediately, providing a major stimulus to the cannabis industry. While the recently introduced bills don’t appear likely to pass in their current form, they could help advance negotiations in Congress. I have heard from several sources that some would like to replace 280E with a federal excise tax, which would impose a much lower burden on the industry.

For those who want to learn more about  the important issues of 280E and taxation, NCIA’s Cannabis Business Summit taking place in Oakland in June includes a keynote panel  with Wykowski, Harborside’s Steve DeAngelo and Taylor West and Michael Correia of NCIA. 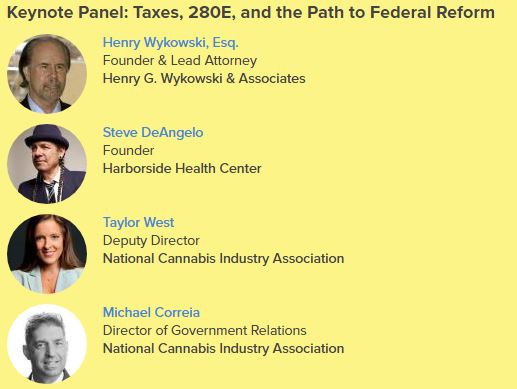 New Cannabis Ventures readers attending the Cannabis Business Summit can save 15% by using the code “NEWCV15” and can lock in early bird rates that go up after April 21st.