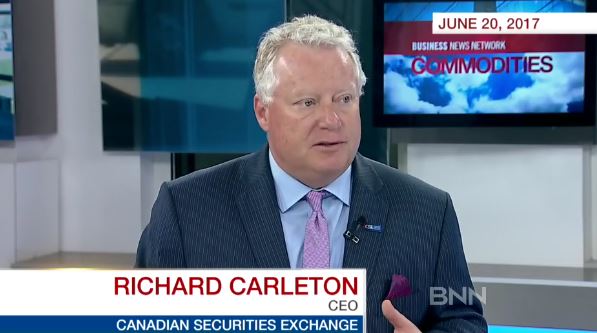 With the exception of Aphria (TSX: APH) (OTC: APHQF), which has involvement with medical cannabis operations in Arizona and Florida, and CanniMed (TSX: CMED) (OTC: CMMDF), which is pursuing cannabis research in Michigan, Canadian cannabis operators listed on the TSX or TSX Venture (both part of TMX Group) have avoided activities in the United States due to policies of the exchange. Recent news reports have pointed to the exchange reconsidering its position.

BNN ran a segment today discussing the differing views of the two Canadian securities exchanges with respect to listed companies owning cannabis assets in the United States. The TSX gave BNN a rather vague answer, but the Canadian Stock Exchange (CSE) is alright with it as long as there is full disclosure, according to its CEO, Richard Carleton.

The segment included Scott Boyes, the CEO of The Canadian Bioceutical Corporation (CSE: BCC) (OTC: CBICF), who shared his perspective. His company, previously listed on the TSX Venture, delisted and listed on the CSE due to a change in the policies at the TSX. The company believes it has a competitive advantage by listing on the CSE and avoiding competition from the well-capitalized LPs who are reluctant to enter the United States. Boyes believes the market in the U.S. is well ahead of Canada, which has blown a head start, pointing to more diversity in products, better branding, superior technologies and more advanced and proprietary genetics.

BCC has operations in Arizona and Massachusetts and has letters of intent to acquire a production facility in Nevada and three operations in Maryland. It also has a pending ACMPR application.

MediPharm Labs Conditionally Approved to Graduate to the TSX