NEW YORK and TORONTO, Nov. 20, 2019 /PRNewswire/ – iAnthus Capital Holdings, Inc. (“iAnthus” or the “Company”) (CSE: IAN,OTCQX: ITHUF), which owns, operates, and partners with best-in-class regulated cannabis operations across the United States, is pleased to report its financial results for the fiscal third quarter ended September 30, 2019. Amounts are in U.S. Dollars, unless stated otherwise.

“The iAnthus team made significant progress in the third quarter. In three of our greenfield states we are now generating well over a million dollars of revenue per month, our MPX brand is commanding a #1 market share position in several states and we are executing on our operating efficiency and lean initiative plans. We expect that we have arranged the necessary financing to continue our growth with a proposed $100 million financing plan and our business now generates adequate cash for operating expenses and maintenance capex in our more established markets. Access to the expected capital from Gotham Green will be used for additional high return investments such as our continued expansion in Florida, New Jersey and New York.”

I am very proud of the leadership of our operating teams who have worked tirelessly to develop lean initiative programs and internal controls for operating our business, which is reflected in our 48% adjusted EBITDA improvement quarter over quarter. I am confident that we are well on our way to positive EBITDA in 2020 and in our ability to generate operating cash flow and grow enterprise value. 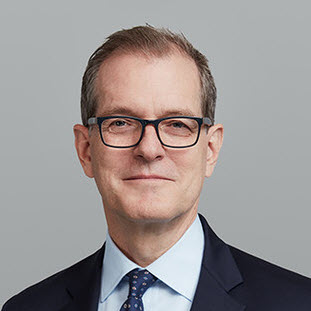 See Tables 1 and 2 below for further detail

At September 30, 2019, total assets were $831.6 million, including cash of $27.9 million, an increase of $663.2 million (or 394%) in total assets from year end 2018
Current fully dilutive share count of 266.2 million shares which includes 171.6 million common shares and 94.6 million dilutive securities
Capital expenditures totaled $19.7 million in the third quarter, the majority (over 80%) of which was spent on the cultivation and store expansion in Florida
On September 30, 2019, the Company announced an agreement for up to $100 million of senior secured convertible notes from Gotham Green Partners; the first $20 million closed on September 30, 2019 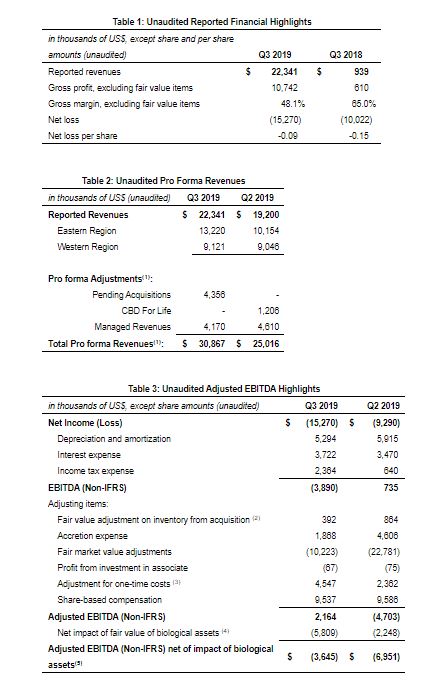 The Company will hold a conference call for financial analysts and investors at 8:30a.m. ET on November 21, 2019 to discuss the Company’s third quarter financial results. The call will be archived and available on iAnthus’ website for replay. Please visit https://www.ianthus.com/investors to access the archived conference call.

The Unaudited Condensed Interim Consolidated Financial Statements and Management’s Discussion and Analysis for the three and nine months ended September 30, 2019 and 2018 may be accessed on the Company’s website at www.ianthus.com and under the Company’s SEDAR profile at www.sedar.com

¹Pro forma Adjustments: refers to full three months ended September 30, 2019 results, regardless of when an acquisition or management contract commenced. This also includes Managed Revenues, which are sales of cannabis products from entities for which management arrangements are in place but iAnthus cannot consolidate due to regulatory restrictions, or from equity investments in which results cannot be consolidated. Managed entities include iAnthus’ involvement in certain Arizona operations, Colorado, and New Mexico.

²Adjustment related to the fair value adjustments on inventory from acquisitions that are being released into cost of goods sold (COGS) for sales recognized during the period.

³Adjustment for one-time acquisition costs include all advisory, professional, legal, consulting, and accounting fees incurred as part of the acquisitions incurred in the quarter. These costs alongside other one-time costs are added back to the total adjusted EBITDA (see footnote 5 below) as these expenses are non-recurring and are not part of ongoing operational activities of the Company. Adjustment to add back the fair value adjustments from the sale of inventory and growth of biological assets during the period.

⁴Adjustment to add back the fair value adjustments from the sale of inventory and growth of biological assets during the period.

⁵Adjusted EBITDA: One of the measures the Company uses to evaluate its objectives is adjusted EBITDA. Adjusted EBITDA is a non IFRS financial measure that does not have a standard meaning prescribed by IFRS and may not be comparable to similar measures presented by other companies. The Company calculates Adjusted EBITDA as net income (loss) before interest, taxes and depreciation and amortization, plus fair value adjustments on sale of inventory and on growth of biological assets, share-based compensation and payments, loss (gain) on equity investments, loss (gain) on foreign exchange, loss (gain) on short-term investments, transaction costs, listing fees and certain one-time non-operating expenses, as determined by management. Management believes this measure provides useful information as it is a commonly used measure in the capital markets and as it is a close proxy for repeatable cash generated by (used for) operations.

The Company believes the pro forma results presented provide relevant and useful information for investors because they clarify the Company’s actual operating performance, make it easier to compare the Company’s results with those of other companies and allow investors to review performance in the same way as the Company’s management. Since these measures are not calculated in accordance with IFRS, they should not be considered in isolation of, or as a substitute for, our reported results as indicators of the Company’s performance, and they may not be comparable to similarly named measures from other companies.