IIP acquired the following properties and made the following additional funds available to tenants for improvements at IIP’s properties during the period from July 1, 2020 through November 4, 2020 (dollars in thousands): 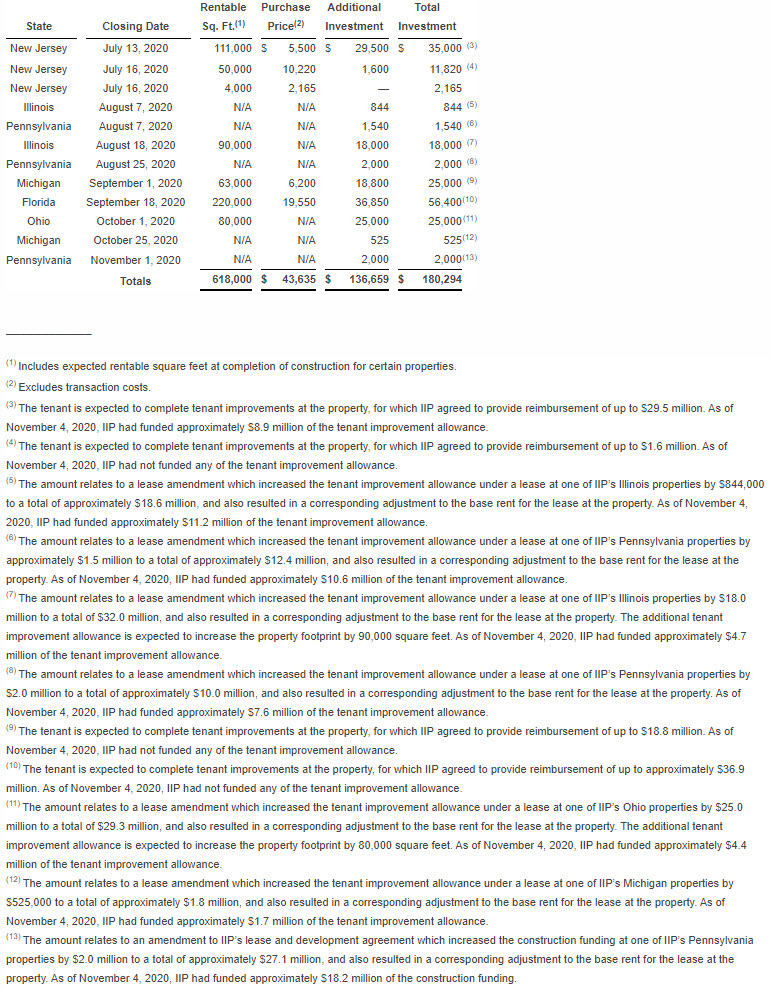 As of November 4, 2020, IIP owned 63 properties located in Arizona, California, Colorado, Florida, Illinois, Maryland, Massachusetts, Michigan, Minnesota, Nevada, New Jersey, New York, North Dakota, Ohio, Pennsylvania and Virginia, totaling approximately 5.0 million rentable square feet (including approximately 1.7 million rentable square feet under development/redevelopment), which were 99.3% leased (based on square footage) with a weighted-average remaining lease term of approximately 16.1 years. As of November 4, 2020, IIP had raised total net proceeds of over $1.4 billion from all of its capital raising activities to date, after deducting underwriters’ discounts and commissions and offering expenses, and had invested approximately $908.4 million in the aggregate (excluding transaction costs) and had committed an additional approximately $273.5 million to reimburse certain tenants and sellers for completion of construction and tenant improvements at IIP’s properties. These statistics do not include up to approximately $7.2 million that may be funded in the future pursuant to IIP’s lease with a tenant at one of IIP’s Massachusetts properties, as the tenant at that property may not elect to have IIP disburse those funds to the tenant and pay IIP the corresponding base rent on those funds. These statistics also treat IIP’s Los Angeles, California property as not leased, due to the tenant being in receivership and its ongoing default in its obligation to pay rent at that location.

In July, IIP completed an underwritten public offering of 3,085,867 shares of common stock, including the exercise in full of the underwriters’ option to purchase an additional 402,504 shares, resulting in net proceeds of approximately $248.2 million.

In September, IIP issued 474,000 shares of common stock for net proceeds of approximately $58.1 million under its “at-the-market” equity offering program.

IIP expects to use the net proceeds from these offerings to invest in specialized industrial real estate assets that support the regulated cannabis cultivation and processing industry and for general corporate purposes.

IIP generated total revenues of approximately $34.3 million for the three months ended September 30, 2020, compared to approximately $11.6 million for the same period in 2019, an increase of 197%. The increase was driven primarily by the acquisition and leasing of new properties, contractual rental escalations at certain properties and the partial repayment of deferrals of rent commencing on July 1 from three of IIP’s tenants described above. Total revenues for the three months ended September 30, 2020 and 2019 also included approximately $2.8 million and $357,000, respectively, of tenant reimbursements for property insurance premiums and property tax paid at certain properties, with the increase driven primarily by the insurance premiums paid by tenants relating to IIP’s placement of a portfolio-wide insurance policy in July 2020.

IIP generated total revenues of approximately $79.8 million for the nine months ended September 30, 2020, compared to approximately $27.0 million for the same period in 2019, an increase of 196%. The increase was driven primarily by the acquisition and leasing of new properties, additional tenant improvement allowances and construction funding at existing properties resulting in adjustments to base rent, and contractual rental escalations at certain properties, partially offset by the deferrals of rent from three of IIP’s tenants described above. Total revenues for the nine months ended September 30, 2020 also included approximately $422,000 of tenant reimbursements, rent collected and associated lease penalties through the drawdown of the security deposit at IIP’s Los Angeles, California property, where the tenant is in receivership and defaulted on its lease obligations, and the drawdown of part of the security deposits totaling approximately $940,000 at certain properties leased to three tenants to pay part of the rent and property management fee as a part of the deferral programs described above. Total revenues for the nine months ended September 30, 2020 and 2019 also included approximately $3.7 million and $941,000, respectively, of tenant reimbursements for property insurance premiums and property tax paid at certain properties.

FFO and AFFO are supplemental non-GAAP financial measures used in the real estate industry to measure and compare the operating performance of real estate companies. A complete reconciliation containing adjustments from GAAP net income available to common stockholders to FFO and AFFO and definitions of terms are included at the end of this release.

Innovative Industrial Properties, Inc. is a self-advised Maryland corporation focused on the acquisition, ownership and management of specialized properties leased to experienced, state-licensed operators for their regulated medical-use cannabis facilities. Innovative Industrial Properties, Inc. has elected to be taxed as a real estate investment trust, commencing with the year ended December 31, 2017. Additional information is available at www.innovativeindustrialproperties.com. 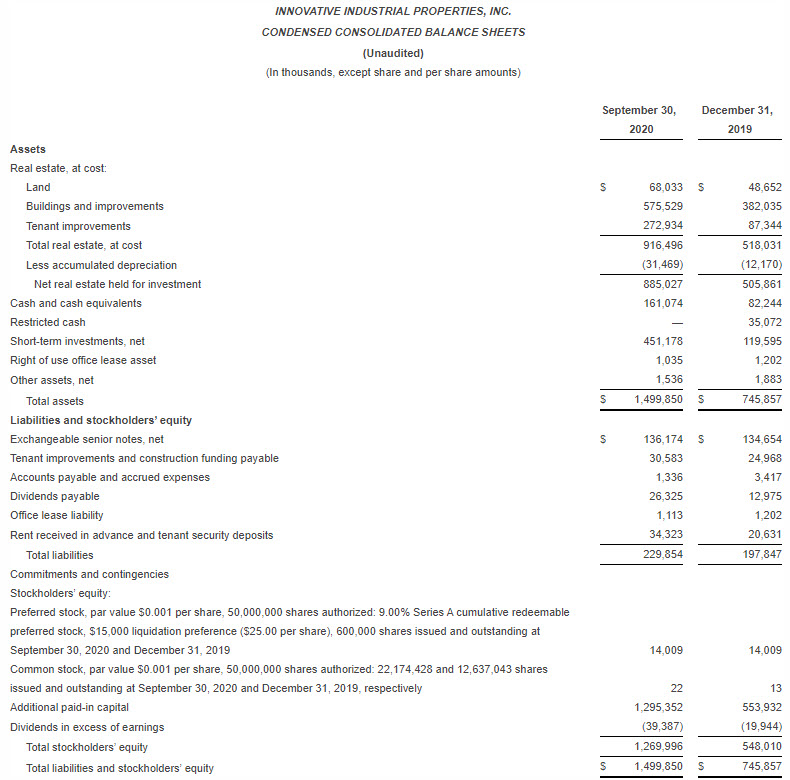 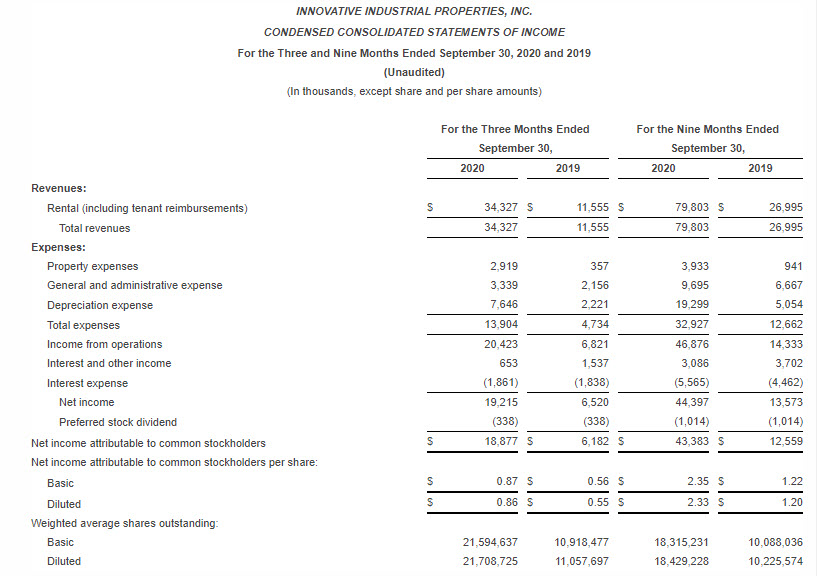 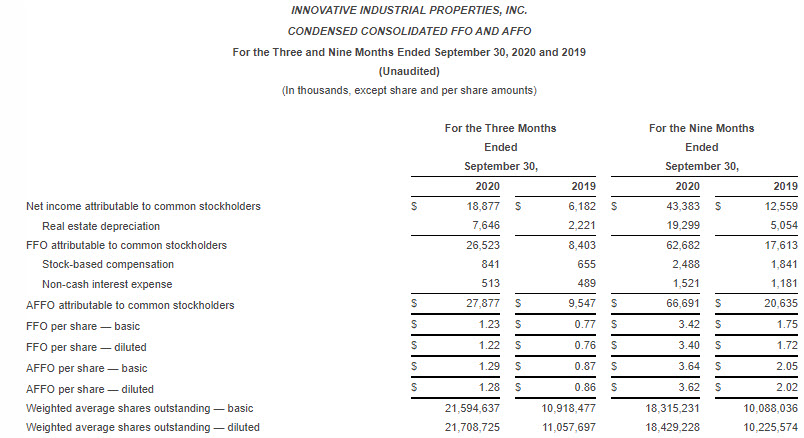 FFO and FFO per share are operating performance measures adopted by the National Association of Real Estate Investment Trusts, Inc. (NAREIT). NAREIT defines FFO as the most commonly accepted and reported measure of a REIT’s operating performance equal to “net income, computed in accordance with accounting principles generally accepted in the United States (GAAP), excluding gains (or losses) from sales of property, plus depreciation, amortization and impairment related to real estate properties, and after adjustments for unconsolidated partnerships and joint ventures.”

Management believes that net income, as defined by GAAP, is the most appropriate earnings measurement. However, management believes FFO and FFO per share to be important supplemental measures of a REIT’s performance because they provide an understanding of the operating performance of IIP’s properties without giving effect to certain significant non-cash items, primarily depreciation expense. Historical cost accounting for real estate assets in accordance with GAAP assumes that the value of real estate assets diminishes predictably over time. However, real estate values instead have historically risen or fallen with market conditions. IIP believes that by excluding the effect of depreciation, FFO and FFO per share can facilitate comparisons of operating performance between periods. FFO and FFO per share are used by management to evaluate the REIT’s operating performance and these measures are the predominant measures used by the REIT industry and industry analysts to evaluate REITs. For these reasons, management has deemed it appropriate to disclose and discuss FFO and FFO per share.

Management believes that AFFO and AFFO per share are also appropriate supplemental measures of a REIT’s operating performance. IIP calculates AFFO by adding to FFO certain non-cash and infrequent or unpredictable expenses which may impact comparability, consisting of non-cash stock-based compensation expense and non-cash interest expense.