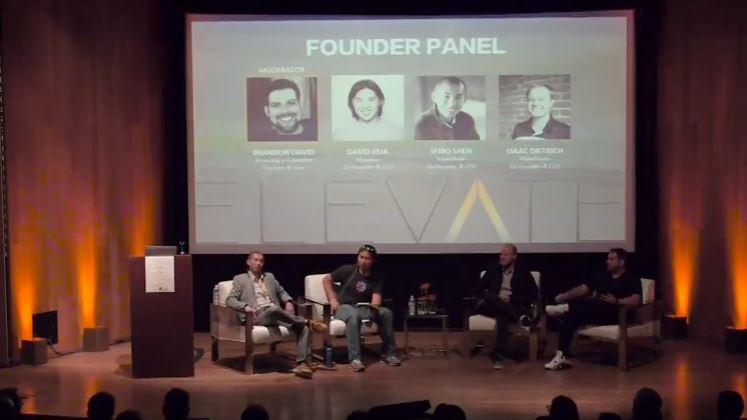 The first Elevate Conference, which took place in Oakland on September 20th, focused on cannabis startups. The event, sponsored by Gateway Incubator and Investing in Cannabis,  provided attendees a great opportunity to learn from some of the leading cannabis company founders, who shared their perspectives in two different panels, both moderated by Brandon David.

The first panel included Cassandra Farrington, co-founder and CEO of Marijuana Business Daily, Geoff Doran, co-founder and VP Business Development of Tradiv  and Cy Scott, co-founder and CEO of Headset. Farrington described how the company has stayed relevant by focusing exclusively on the B2B space and through its journalistic independence. She also shared how her company has been impacted by cannabis stigma and regulatory issues despite its ancillary nature. Doran explained how the company learned a great deal in Colorado before recently expanding to California with its online wholesale marketplace, which has transactions typically of 10-15 pounds. Scott shared that his prior association with Leafly, where he and his team were founders, has opened doors for its data intelligence platform. He contrasted the challenging fund-raising environment in 2010 for Leafly with Headset’s success over the past year, which he attributes to both more capital being available and his prior success.

The second panel included David Hua, co-founder and CEO of Meadow, Isaac Dietrich, co-founder and CEO of MassRoots (OTC: MSRT) and Seibo Shen, co-founder and CEO of VapeXhale. Hua explained how his company powers many of the delivery services with its software but also how it has developed other solutions for dispensaries as it moves deeper into the supply chain. Dietrich discussed how his company is going to better leverage its user base and pointed to collaborations with Headset and Flowhub to better use data. Shen discussed some recent challenges with the second version of their highly acclaimed vaporization device.

For those in the Bay Area, several of these companies, including Headset, MassRoots, Tradiv and VapeXhale, will be participating in New West Summit on October 14-15. Readers of New Cannabis Ventures can purchase one-day or two-day passes at a 50% discount.

Here is What Excites This $280 Million Cannabis Venture Capital Firm